Dude, a String Is a String in PowerShell

Hey, Scripting Guy! I have a problem with a script. It is used to write data to another application, but sometimes the variables in it are empty. I have tried to detect this by checking to see if the variable is equal to $null, but this does not work very well. I need a different way to do this. Can you help?

Microsoft Scripting Guy, Ed Wilson, is here. When I was looking out the window this morning, I saw a squirrel drop from a tree, look up, and then bunny hop across the yard until he jumped onto another tree and disappeared. I know it was a squirrel because I saw the big bushy tail. But if the Scripting Wife had told me she saw a small furry animal hopping across the yard, I would have assumed it was a rabbit.

Put another way, I can check the weather app on my Windows 10 laptop to see if it is hot or cold outside, or I can put on my shoes and walk out to see for myself. Sometimes, it is best to check on things, rather than to base opinions on preconceived notions—such as animals that hop are bunnies, or that the weather app really knows whether I will feel hot or cold outside.

I can use regular expressions, but dude…

When it comes to determining if a variable is null, empty, or something else, I often think about using regular expressions. In reality, I do not need to do that—especially not in this particular case. This is because System.String has a couple of static methods that are perfect for the occasion.

To see what static methods and properties are available, I can pipe [string] to Get-Member, for example:

One thing that is cool is that there is an IsNullOrEmpty static method. Here is an example of using that static property:

As I would expect, the string contained in the $a variable is not null, nor is it empty. If I use a variable that is not yet created, I obtain a different result:

What if I initialize the $b variable, but I do so with an empty string?

This time, my empty string comes back and says that it is not null, nor is it empty. It contains a blank space. What if I remove that space?

It seems that removing the space caused it to be null or empty.

Well, what about white space like the one I had earlier with the $b? As shown here, there is a method called IsNullOrWhiteSpace:

These commands and their output are shown here: 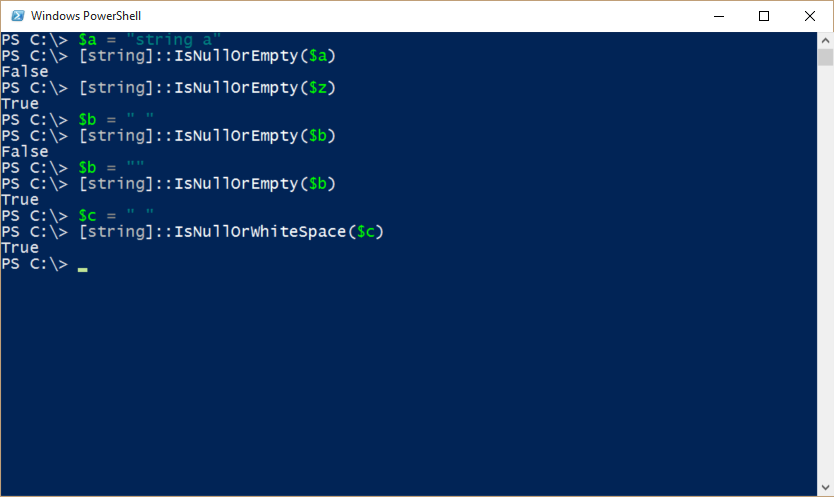 JB, that is all there is to determining if a string is null or empty.  Join me tomorrow when I will talk about more cool Windows PowerShell stuff.