Summary: Microsoft Scripting Guy Ed Wilson talks about when to not write a Windows PowerShell script.

Microsoft Scripting Guy, Ed Wilson, is here. Network administrators do not script! ITPros do not like to script! I have heard statements like this for years. Yet, when I first wrote my VBScript workshop for Microsoft Premier Workshops, it quickly became the most popular of all workshop offerings. So what gives? Is there a disconnect? Do ITPros really like to write scripts? Is there a secret developer hiding inside net admins that is struggling to make itself known? I do not think so. Rather, I believe that the desire to “learn” scripting is the desire to ease network administration duties. I believe the impetus to acquire scripting skills is the wish to automate repetitive tasks. In the past, these twin needs and goals did require learning rudimentary (and at times more advanced) programming skills, but this is no longer the case.

I think a couple of examples are in order to illustrate what I am talking about. Consider the simple case of checking the version of the BIOS on the computer. In the old-fashioned VBScript days, a script such as the following was the order of the day.

On Error Resume Next

With Windows PowerShell, it is possible to replace that exact script with the following command.

The output from the VBScript script and the PowerShell command are nearly identical.

If I need to use different credentials (an account other than the one that I am currently using) to run the command, I use the Credential parameter as shown here.

When the command runs, a dialog box appears that prompts me to enter my password. This password is encrypted as it is transmitted because it is retrieved and handled as a secure string. The dialog box for the password is shown in the following image. 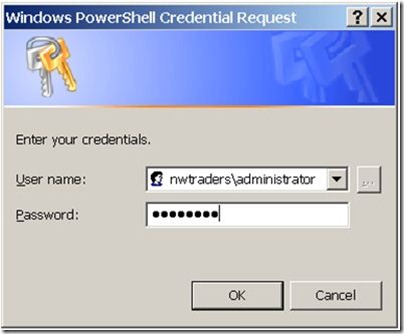 Well, this is all fine and dandy, but to be honest, it is a bit silly to read a text file that contains dozens (or even hundreds) of computer names, and then display the results to the console. It makes more sense to output the information somewhere. I like writing the data to a database and using the SQLPSX modules. It is really trivial to write information to a database. The easiest way to store the returned information is to use redirection arrows and write the returned data to a text file. This technique is shown here.

Because I am working interactively in the Windows PowerShell console, I might want to shorten the syntax a bit by using commonly available aliases for the commands. To do this, the previous command becomes:

You can always check to ensure that the new alias “took” by using the Get-Alias cmdlet as shown here.

Or better yet, you can simply try the new command and see what happens. This is what I do here.

None of this required any scripting. Now suppose in my testing, I detect that there is a bad BIOS version. I mean, it is the sort of thing that causes my servers to emit a BSOD (blue screen of death). In the past, I would need to write a script to check for that. But by using Windows PowerShell, I simply “tack” an additional cmdlet to the end of my pipeline. The revised command is shown here.

Note: The previous command is a single logical command. I broke it at the pipeline character (|) so it would fit better in the blog format.

If I only need a list of the servers that will need the BIOS update, I add an additional cmdlet to the end of the command. This time, I use the Select-Object cmdlet to retrieve the __Server property (that is a double underscore character at the beginning of the __Server property). In WMI, there is always a system property named __Server that stores the name of the computer. This property exists in nearly every WMI class. The revised command is shown here.

Once again, this is a single logical command. I broke the command at the pipeline character (|) to better format the command for the blog.

I can shorten this command by using aliases. There is a default alias of Select for the Select-Object cmdlet. A short version of the command is shown here.

Don't Write Scripts, Write PowerShell Functions
Summary: There are times when piling Windows PowerShell cmdlets together becomes a bit cumbersome, so instead of writing a script, consider functions. Weekend Scripter ...