Create a Hash Table with PowerShell Aliases and Definitions

Microsoft Scripting Guy, Ed Wilson, here. It has finally happened, I unveiled the last event of the 2011 Windows PowerShell Scripting Games on Friday. Contestants still have a week to deliver their solutions for the remaining events, but the games are drawing to a conclusion.

The judging criteria for the 2011 Scripting Games are not arbitrary, but they actually represent best practices to incorporate when writing enterprise production scripts. One of those guidelines is to not use Windows PowerShell cmdlet aliases in a script. This causes a few problems for people, because when working interactively from the Windows PowerShell console, the use of aliases is encouraged because it simplifies typing and allows one to get the task accomplished more quickly.

While I was grading some of the scripts for the 2011 Scripting Games, a third option to the problem of aliases came to me: Write a script and have it replace all aliases with the full cmdlet names.

Today’s blog is the first of a series of four that will discuss the parts of my solution to the problem of working with aliases. In this blog, I want to create a hash table and populate it with all of the available aliases. The code that accomplishes this task is shown here.

The Get-Alias cmdlet returns a list of aliases and their associated definitions. Each alias that is returned by this cmdlet is an instance of an aliasinfo object. The members of that object are shown here.

To retrieve only the name and the definition from all of the aliases, I use the code seen here.

The command to retrieve aliases and definitions and the associated output are shown here. When I have the aliases and their associated definition, I create a hash table for storage. The name will be the key property because all aliases have to be unique. The definition will be the value that is associated with the key because there could be several aliases for a single cmdlet.

To create an empty hash table, I use the syntax shown here where I store the empty hash table in the $a variable. I only need to perform this action once, so I place this command in the begin portion of the Foreach-Object cmdlet.

To add to the hash table, I use the add method. The first item is the key, and the second item is the value. In this example, I am adding the name as the key and the definition as the value. I will add each alias and its associated definition as they flow through the Foreach-Object cmdlet. Therefore, this section goes into the process portion of the command. Here is that portion of the script.

The last thing I do here, is to display the contents of the hash table that is stored in the $a variable. This action will occur after everything else has completed; and therefore, it appears in the end portion of the ForEach-Object cmdlet.

The script and its associated output are shown in the following image. 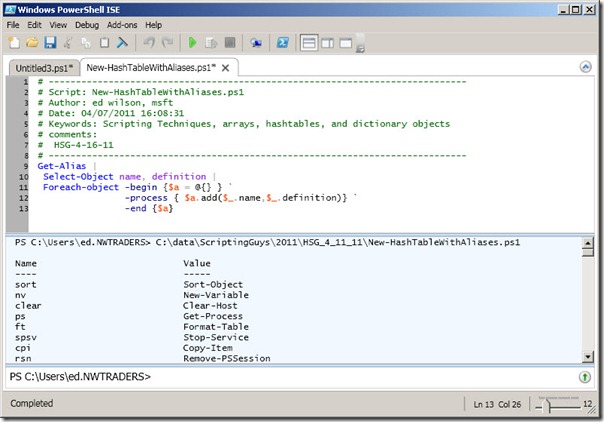