In a previous post I discussed an approach to handling backend redundancy using Azure API Manager (APIM). In this post I want to discuss the various options for providing a high-availability (HA) and disaster recovery (DR) to your services exposed by API Manager.

Before getting into the various options available let’s discuss the components which are relevant to delivering a high-availability solution within Azure.

Firstly, it is important to understand the redundancy available with API Manager. API Manager is composed of two components. There is the Service Management component which is responsible for servicing all of the administration and configuration calls, and the API Gateway component which services the actual endpoints which you are surfacing to your consumers and which routes the calls (via policy) to the backend services.

Using API Manager you can provision multiple API Gateway components (called “units” in the portal) and, under the Premium tier, these can be distributed across multiple regions (read more here). All of these gateways have the same configuration and policy definition, and therefore by default all point to the same backend endpoint. If you want your API Gateways to point to different backend endpoints you will need to modify the policy definition to route calls accordingly. Calls into API Manager will automatically be load-balanced to the closest available API Gateway, providing highly-available redundancy, as well as performance improvements to global users.

Notice however that the Service Management component does not replicate across regions, rather it exists only in the primary region. If the primary region experiences an outage, configuration changes cannot be made to the API Manager (including updating settings or policies).

Azure Traffic Manager is a high-availability service which operates across Azure regions. It is a DNS-based load balancer which routes traffic globally to provide performance and resilience to your services. It uses endpoint monitoring to detect failures and, if a failure is detected, it will automatically “switch” the DNS entry served up to calls to re-route traffic to healthy endpoints.

You can read more about how Traffic Manager works here.

Azure Front Door is a new service offered by Microsoft (at the time of writing, in public preview). It offers a point-of-entry into Microsoft’s global network and provides you with automatic failover, high-availability and optimised performance. These entry points are global distributed to ensure that, no matter where your consumers are based geographically, an entry point exists close to them. These form the edge of the Microsoft network, and once the traffic is inside this network it can be routed to your services in whatever configuration is required.

Routing is done at layer 7, which means that traffic is directly controlled by Front Door and does not rely on DNS switching.

Like Traffic Manager health probes in Front Door monitor your services to provide automatic failover in the case of failure.

In a typical scenario we have a backend service which are fronted by API Manager and these endpoints are exposed to consumers. If we want to provide a true highly-available solution we need redundancy at every level, including the backend services and the API Manager layer. We also want to provide maximum performance to our consumers and therefore route them to the closest available endpoint to service their request.

The high-level architecture diagram would look some similar to the following:

In this diagram the backend services are represented as Azure Functions, but the solutions discussed here are independent of the technology used to service the endpoint. Also, for simplicity of the diagram I have shown the consumers existing in the Azure regions, however for all the options discussed below the consumers may be globally distributed and need not originate from within Azure.

The dark blue lines show the flow of traffic under normal operating conditions; and the light blue shows the possible fail-over traffic routes.

Option 1: Retry logic in the consumer

Option 2: Use Traffic Manager In Front of API Manager

The API Manager can be fronted by Azure Traffic Manager to provide load balancing and automatic failover.

Just like Traffic Manager we could front the API Manager with a manually configured DNS entry. This won’t supply automatic failover, nor will it route users automatically to the closest API Manager instance, but it will provide a level of disaster recovery to our system. This is not a high-availability solution but in included here for completeness of the discussion.

Notice that, in the event of a planned failover, first switch the DNS entry and monitor the traffic. When all traffic is routing to the secondary region it is safe to bring down the services in the primary.

Using Azure Front Door purely for providing a high-availability layer in front of API Manager would be like trying to crack a nut with a sledgehammer. However, if you already making use of the Front Door service one can certainly embrace its load balancing functionality.

As mentioned above, the Azure API Manager’s API Gateway can be redundantly deployed, even across global regions. Using this setup our diagram becomes: 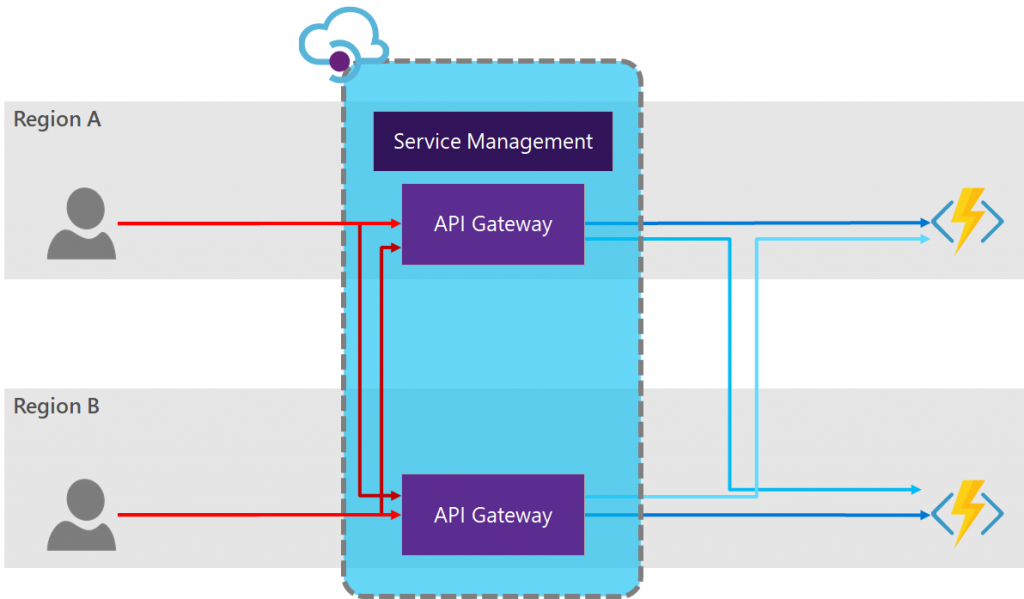 The redundancy options for the backend API are independent of the option chosen for the consumer facing API. In the examples shown below the diagram has two separate API Manager instances but this could equally be a single API Manager instance with region gateway deployments (i.e. option 5, above).

We could choose to connect each API Manager instance to its own backend service, with no failover.

In this deployment we are not providing a totally highly-available solution, but we do protect against regional Azure outages. We can simplify the deployment of each API Manager instance by re-using the same policy in all deployments but using either configuration or custom switching logic to route to the required endpoint.

The following inbound policy fragment shows how the deployment-region (context.Deployment.Region) can be used to route traffic accordingly:

Just as we used traffic manager in front of API Manager to provide resiliency to the consumer, so too we can use it to front of the backend service. Vis:

As discussed in my previous article we are able to utilise logic in the API Manager’s policies to provide custom retry and failover logic in the event of a failure in the default service endpoint (the detail is omitted here for brevity).

Before concluding this article I also wanted to point out that, when deploying multiple gateways in a single API Manager instance, each gateway receives its own addressable endpoint URL. These are in addition to API Manager’s “global” gateway URL. The regional URLs are discoverable from the API Manager blade in the Azure portal under the Settings -> Properties.

This may be useful to test the system’s performance and accessibility via various the global endpoints.

In this article I have attempted to give a complete picture to the redundancy options available within Azure to provide disaster recovery and high-availability to your services presented through API Manager. We showed that redundancy must be considered between the consumer and API Manager, and between API Manager and the backend service. A number of options were discussed for each “hop”.

Angular How-to: Implement Feature Flags
In an agile development environment, there may be partially completed features or features with external dependencies that are not ready. Instead of relying on multiple code branches, instead you may opt for deploying code with a feature turned off. Later, that feature should be turned on via a configuration or database change. This post provides sample code that you can use to implement feature flags in your Angular app.

Developer Support
November 12, 2018
0 comment
Synchronizing Azure Cosmos DB Collections for Blazing Fast Queries
While Cosmos DB offloads many of the hard NoSQL scaling problems, shaping your data and choosing a logical partition key are left to you. The partition key choice is arguably the most important decision you’ll need to make – it cannot be changed and must be determined upon creation of a collection.