Years have gone by since these movies debuted. Today, it is no longer science fiction to interact with intelligent machines. Some might argue that the quality could be better…but just look at how this has all progressed in a short time.

In this blog, we are going to explore the differences or comparisons of Artificial Intelligence (AI), Machine Learning (ML) & Data Science (DS).

Applications like Siri, Alexa, and Cortana have a humanlike intelligence. The pure definition of AI is an application that can pass the Turing test.[4] To pass the test, an application/machine’s replies need to be indistinguishable from a human reply within five minutes. It could be debated that two chatbots have passed the test, and even possibly an application known as Eugene Goostman. Last year, Google’s Duplex AI also passed. However, there are skeptics who would argue that none have passed.

You can think of AI as a machine/application that produces an action to some request or event. We see examples of this growing across many systems and machines. Some companies, such as Google and Amazon, have subtly implemented AI through recommendations for a product or movie.

In addition, AI devices are constantly learning with asking, “Did that answer your question?”. Responses of “yes/no” teach the AI to respond differently for others.

Let’s go a bit further now, as this drifts into Machine Learning.

ML results in a prediction of some possible outcome. In our example of recommending what product or movie you might like, the technology takes into account your previous choices, time of day, time of year, what you like, your income, etc., and makes a recommendation. It’s very likely that a system that makes recommendations is running a “recommender” engine or algorithm. A recommender or recommendation engine predicts the “rating” that a user would give to an item (e.g. movie, book, song) that they had not yet considered using a model built from the characteristics of an item and “presents” it to them.

One might think predicting the weather similar to predicting earthquakes. You’ve got a ton of unique bits of information or variables and with the aid of some super-fast machines you do some heavy math to come up with a prediction. In the case of the weather, this is great for predicting if it will rain tomorrow, but the accuracy drops significantly in just hours outside that initial timeframe.

Earthquakes can’t be predicted yet, despite the years of historical data. This is because the variables leading up to an earthquake vary. The USGS (United States Geological Survey) states “to predict an earthquake, you must know the date, time, location, and the magnitude of the quake”. Compare this to predicting rain in Tampa, Florida, in August. Based on the location of Tampa to the warm gulf water, it is likely to rain most days in August (highest monthly rainfall in Tampa is August with 7.3 inches). You could even say that it will rain most afternoons in August.

An earthquake can happen anywhere, at any time. There are higher probabilities in locations where earthquakes occur (e.g. Ring of Fire), but that horseshoe shaped area is 25,000 miles. Given the date, time, location, and magnitude needed to predict an earthquake, it is comparatively much harder–or according to the USGS– impossible to do this today. To summarize, there are too many inconsistent variables to predict an earthquake vs. the well-documented and consistent weather patterns, as in Tampa Florida.

DS is the actions of finding an insight or perception. To go a bit deeper, Data Science is a multidisciplinary field that uses scientific methods, processes, algorithms, and systems to extract knowledge and insights from structured and unstructured data.[5]

Microsoft, and other tech companies, provides tools for data scientists to analyze and find insights.

Microsoft defines this process or lifecycle in this chart: 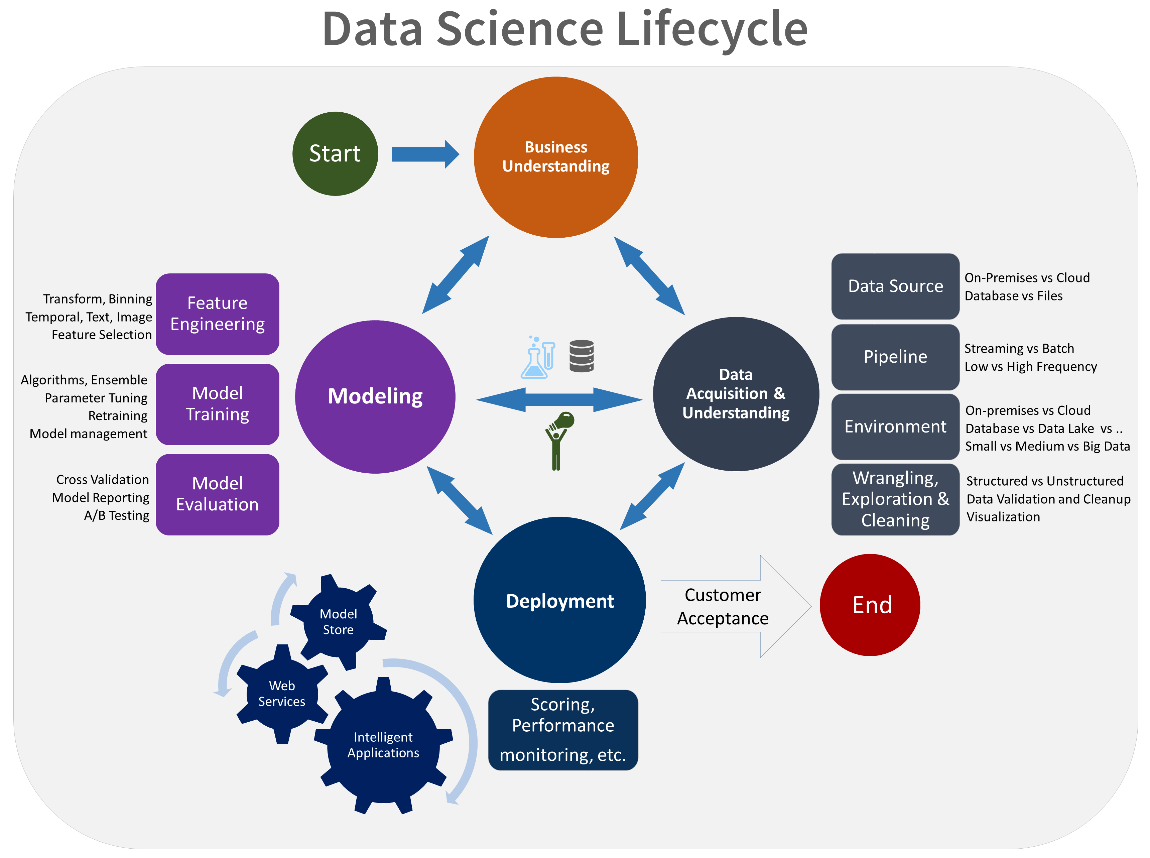 This graphic shows an entire process or lifecycle of the job a data scientist would manage.

Where would you find all three (AI, ML and DS) at work? The most common place today is in autonomous driving vehicles. All three disciplines work together to help train an algorithm to recognize obstacles (ML), then to provide real-time actions (AI) to the vehicle, all based on large amounts of information that data science (DS) analyzed to determine patterns, actions, and the physics to perform safely.

How to Alert on Azure BLOB Access
In this post, learn how to use Azure Monitor and Log Analytics to determine metrics not available under standard Metrics blade in Azure Portal. In this post, I will show you how to leverage Azure Storage $logs for enhanced reporting.