A context switch occurs when a CPU core switches from executing code on one thread, to executing code on a different thread, or going to idle.  When the OS switches the thread that is running on a CPU, it must save and restore state both for the thread that is being switched out, and for the thread that is being switched in.  This state, or context, includes data such as the current value of all registers, the program counter and so on.  Saving and restoring this state is an expensive operation from a performance perspective, so reducing the overall number of context switches is often key to achieving predictable, consistent frame times.

Context switches can happen when a thread waits on a synchronization object, when the OS scheduler determines a thread’s quantum has expired (and another thread is ready to run on that core) and so on.

The new implementation of Timing Captures in PIX has several features to help you determine when context switches occur, and to analyze what caused each switch.

Context switches are shown in the Timeline as vertical red lines on both the Core and Thread lanes. 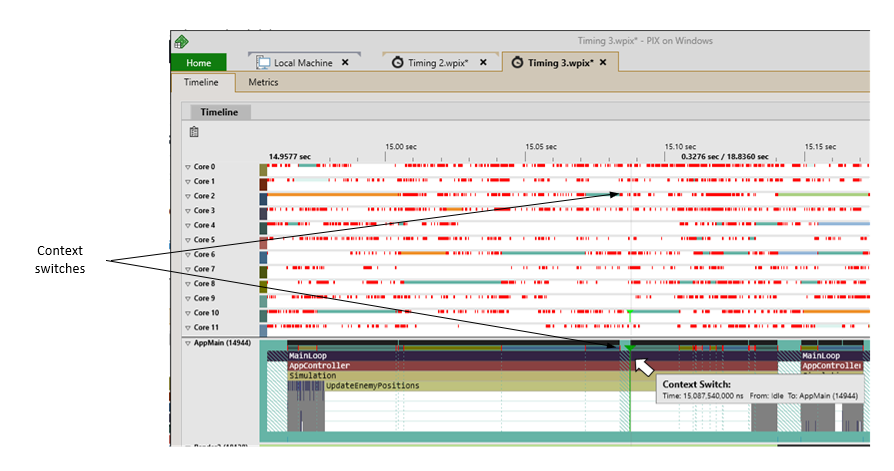 Once you find a frame or region of time that contains several context swtiches, you’ll often want to navigate sequentially through all the context switches that occurred during that time period.

The PIX UI offers a few different options for sequentially navigating through context switches. First, the Element Details view includes a chronological list of all stalls that occurred while a selected event is running. If you have an event that represents a frame of CPU time, you can use Element Details to navigate through all context switches that occurred in a particular frame. For example, the following picture shows a selected frame-level event that includes 22 stalls. After selecting a range of time, use the Items to Show dropdown to view the list of all context switches that occurred during that time range. By default, the list of context switches in Range Details is shown in chronological order. Clicking on one of the columns in the table changes the sort order.

Selecting a context switch in Range Details populates Element Details with information about the context switch, including its callstack. The up and down arrow keys can be used to quickly navigate the list of context switches.

You’ll also want to make sure that you’ve configured PIX to be able to locate your title’s PDBs.  Without the PDBs, the context switch callstacks displayed in Element Details will contain only function addresses, not function names.

By studying the From, To and Readying callstacks, you’ll be able to determine why a context switch occurred.  For example, the context switch in the following diagram shows the render thread beginning to run again because the main thread dispatched some rendering work. The To and From threads in a context switch won’t necessarily both be threads in your title. It’s quite possible for a thread in your title to be switched out in favor of a thread in a different process.  When this occurs, Element Details includes the process ID for the non-title process. The fact that Element Details shows the process ID but not the process name is a bug that we’ll fix in a future release.  For now, you’ll have to use a utility like tlist or Task Manager to map the process ID to a name. For example, the following picture shows a context switch where one of my title threads was swapped out to run Microsoft Teams.  I used Task Manager to identify the external process in this case. The core lanes also contain information about which non-title process was running at any point in time.  In the picture above, the core lanes tell me that core 5 switched from running my game to running Teams.