On Monday, Epic Games announced that DirectX 12 support is coming to Fortnite. And today, the wait is over: anyone updating to the v11.20 patch has the option to try out Fortnite’s beta DX12 path!

What does this all mean? Let’s see if we can help!

We at the DirectX team designed DirectX 11 to be the best API for game developers to use in their engines. Even though we shipped DX11 a decade ago, for many games it’s still a great option. Having said that, DX12 has several advantages over DX11.

Additionally, DX12 is a modern API with more next-gen features than DX11, or any other graphics API. DX12 is the only API with broad native support for exciting new graphics features like Variable Rate Shading, DirectX Raytracing and DirectML.

What about Fortnite? Will switching to DX12 improve my performance?

While DX12 may improve overall average frame rate, the most important benefit is that DX12 can provide is a performance boost when Fortnite gamers need it most. During a heated battle, the number of objects on the screen can skyrocket, which places additional demand on the CPU*. This additional demand on the CPU can cause the frame rate to drop during the most critical moments of the game. Because DX12 uses the CPU more efficiently, the frame rate will drop much less when the game demands the most performance, providing a more consistent frame rate throughout the entire gaming experience.

To show this, we used PresentMon to collect some early performance data.  Because competitive gamers care most about maximizing frame rate and minimizing latency, we lowered the graphics settings, but set view distance to “Far”. Your specific results will vary depending on your exact machine configuration.

While the average frame rates for DX12 were slightly higher than DX11 (2%), DX12 was much faster when it matters most. When the game is rendering the most demanding frames (slowest .1% of frames), DX12 shows an ~10% average improvement in frame rate.

The truth is, it’s complicated and depends on your machine, settings and playstyle.

To try out DX12 in Fortnite, go to your Settings menu in Fortnite and make sure you’re looking at your Video settings. At the very bottom of the menu, select DirectX 12 (BETA) next to DirectX Version 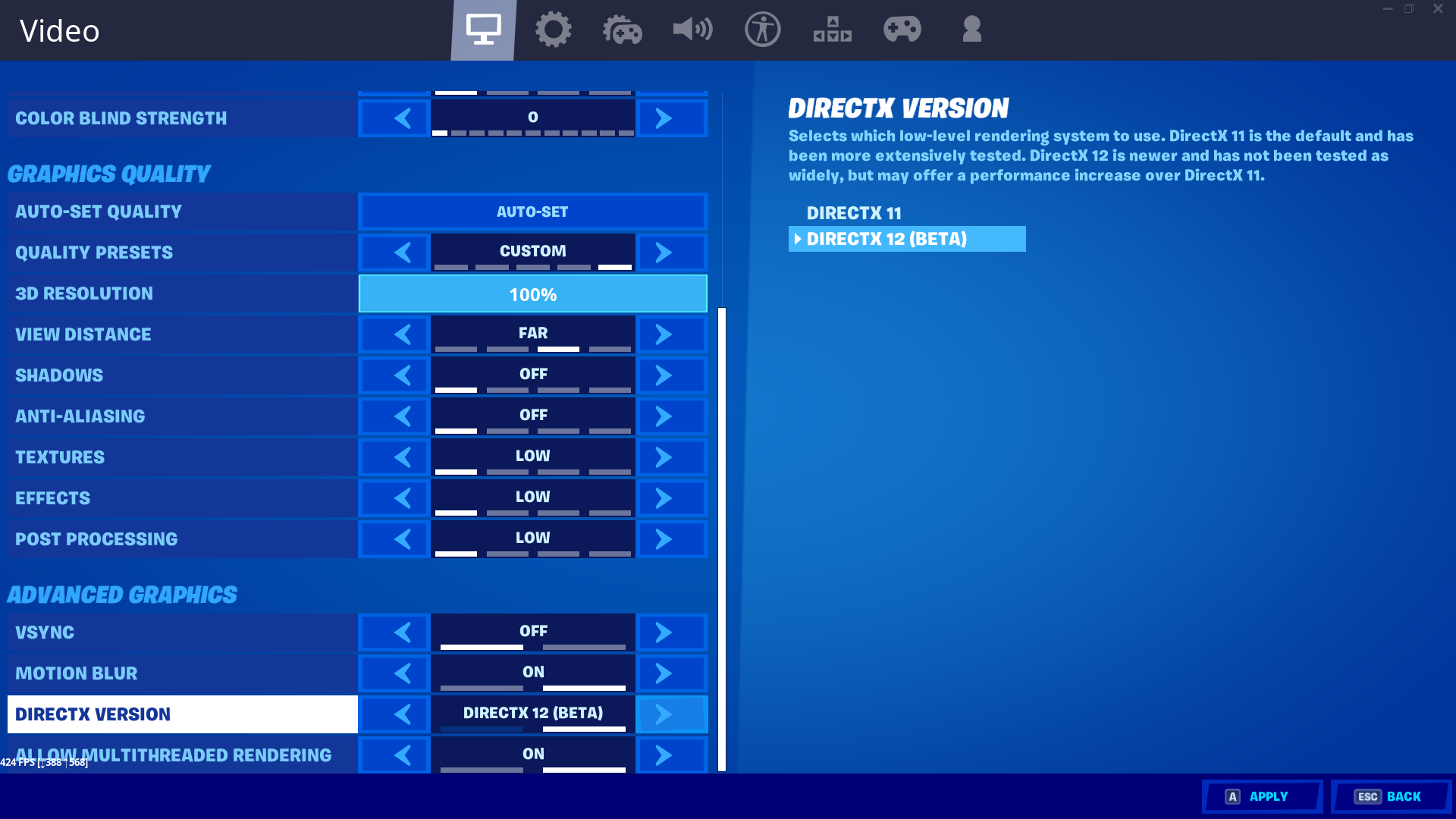 Will my machine be able to run DX12?

Anyone who meets minimum specifications for Fortnite can run DX12. If you’re on Windows 10, you’ll be able to test out DX12!

Hannah Fisher
December 17, 2019
11 comments
D3D12 Translation Layer and D3D11On12 are now open source
If you’re a developer looking to port your game to DX12, we have good news: The D3D12 Translation Layer, a helper library for translating graphics concepts and commands from a D3D11-style domain to a D3D12-style domain, is now open source. As an example of how to use the library, we have also opened sourced the D3D11On12 mapping layer.