Using the latest NuGet in your build

NuGet (both the command-line tool and the accompanying tools built into Visual Studio) continues to iterate rapidly and add support for new .NET Core and .NET Standard target frameworks, among other improvements. Naturally, many users of Team Build in Visual Studio Team Services want to build those apps, and we’ve seen some support issues because the version of NuGet used in the ‘NuGet’ build task by default is 4.0.0, which throws various error messages when trying to build these new project types.

Additionally, on November 10th, NuGet.org will require that packages are pushed by NuGet clients that support protocol version 4.1.0 or greater (e.g. NuGet 4.1 or greater) to push packages.

So, we’ve made a few updates to make it easier to use new versions of NuGet in your builds and releases.

If you’re using VSTS or the upcoming TFS 2018 release, new template-based builds will work automatically thanks to a new “NuGet Tool Installer” task that’s been added to the beginning of all build templates that use the NuGet task. Right now, the templates request NuGet 4.3; we’ll periodically update the default for new builds around the same time we install Visual Studio updates on the Hosted build agents.

For existing builds, just add or update a NuGet Tool Installer step to select the version of NuGet for all the subsequent steps. 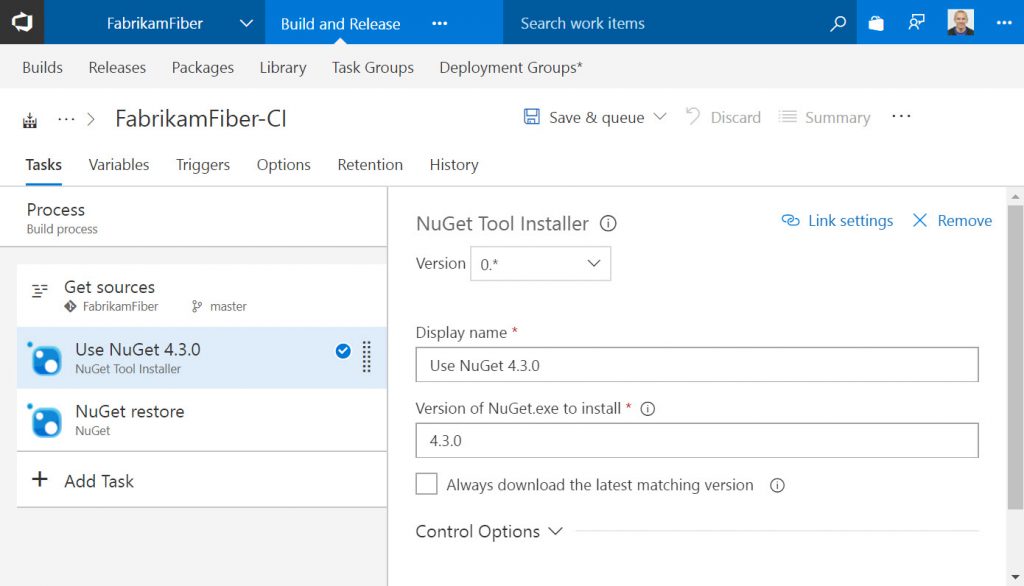 Because the NuGet Tool Installer is not available in TFS versions prior to TFS 2018, there is a recommended workaround to use versions of NuGet > 4.0.0 in Team Build.

Our thanks to GitHub user leftler for creating the original version of the PowerShell script linked above.

Top stories from the VSTS community – 2017.10.06
Here are top stories we found in our streams this week related to DevOps, VSTS, TFS and other interesting topics.  TOP STORIES RADIOTFS VIDEOS TIP: If ...

Willy-P. Schaub
October 6, 2017
0 comment
DevOps with Azure and VSTS: Videos from Ignite 2017
The Visual Studio Team Services team just got back from Microsoft Ignite, and we had the opportunity to talk to so many people about VSTS and DevOps. But if you weren’t...