Behind the scenes: the Backlog Priority or Stack Rank field

The backlog in TFS is an ordered list of work items, such as the product backlog. In Scrum you get the ordered list of PBIs and Bugs, in Agile you will see User Stories and CMMI contains the Requirements and Change Requests. The order of the backlog items is dictated by the the “Order” field as defined in the process configuration. The process templates that we ship use different fields for this “Order” field. The Scrum template uses the field called “Backlog Priority”, while the Agile and CMMI templates use the field called “Stack Rank”.

In the screenshot below (which is taken from Visual Studio Online) you see a product backlog that is based on the Scrum template. As you can see in the Backlog Priority field, the values are not from 1..N. In this blog post, I want to explain why it is not consecutive and what is changed in TFS 2013 Update 2. Imagine we had used a consecutive range of values of 1..N, then moving Item #1 to position 4 would mean that not only #1 needs to be updated, but #2, #3 and #4 as well. Roughly the reorder operation gets 4 times as slow. And imagine that you move #1 to position #200 or even further down.

When we shipped TFS 2012, the product would set the Backlog Priority field to a value to create big gaps, so many items can be added to the backlog (or reordered) without updating any other backlog item. Prior to TFS 2013 Update 2 we used the upper limit of the range of 1,000,000, and used an halving logic to create the big gaps. The first item on the backlog would get the value 500,000, the second item (assume it goes to the top of the backlog) 250,000 and so on. When you continue adding items to the top of the backlog, you would get to a Backlog Priority of 1 for the 20th item. When the user now adds or moves an item to the top of the backlog, multiple items need to be updated to create unique Backlog Priority field values (we only use whole numbers). We anticipated this scenario, and included a feature we call “sparsification”. This sparsification logic starts with the current item and walks down until it finds a gap. All the items in that range are then redistributed to create gaps for new backlog items without affecting others.

When we reviewed the sparsification logic with metrics that we capture on Visual Studio Online and our internal servers, it became clear that the logic was not very effective with how people interact with the backlog. The picture below shows the distribution of the items on our internal Pioneer server (VSO showed similar results). On the chart you can clearly see the spikes on the ‘halved’ numbers such as 500,000 and 250,000. But what is even more important is the ‘dust in the corners’. The top and the bottom of the backlog it is very dense. The result is that the sparsification runs often causing slower performance while working with the backlog. We have had reports where every reorder on the backlogs took over 10 seconds due to this behavior. 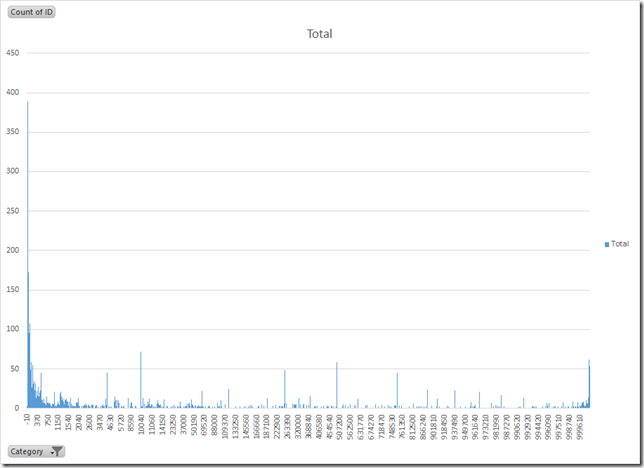 In Update 2 we have made modifications to fix this:

After we shipped the change, we have received multiple reports from customers who were confused with the change. If the customer had set the Backlog Priority field via Excel to values 1..N, the old sparsification logic kept the range values pretty much intact (especially the top items). With Update 2 however, once you add or reorder items on the backlog, the sparsification logic sets the field values to big numbers to introduce big gaps, and give you good performance.This change is intentionally, and by design. The Backlog Priority field was always intended to be a system field, and our recommendation is to not update field manually.

Hopefully I have been able to give you more insight in the inner workings of the backlog, and you understand better what is going on.

Willy-P. Schaub
May 15, 2014
0 comment
Application Insights in DevDays Finland
It is always very interesting to see how different technologies are adopted at different rates in different geographies for instance MSMQ initially had its largest user ...