Last couple of weeks have been pretty crazy; in addition to the launching the new browser based Load Test Authoring experience at TechEd Europe, hosting the MVP summit, getting Update 4 released we have been working on getting Visual Studio 2015 Preview ready for you.   If you want a sneak of Visual Studio 2015 Preview in action be sure and watch Scott Guthrie and Soma announce the new releases at the Connect(); event online and watch over 55 on-demand sessions from my fellow coworkers in DevDiv and Azure (https://aka.ms/connect).  If you are like me and just want to get started here are the downloads links:

· To get a more holistic of view of the release make sure and check out these other blog posts: 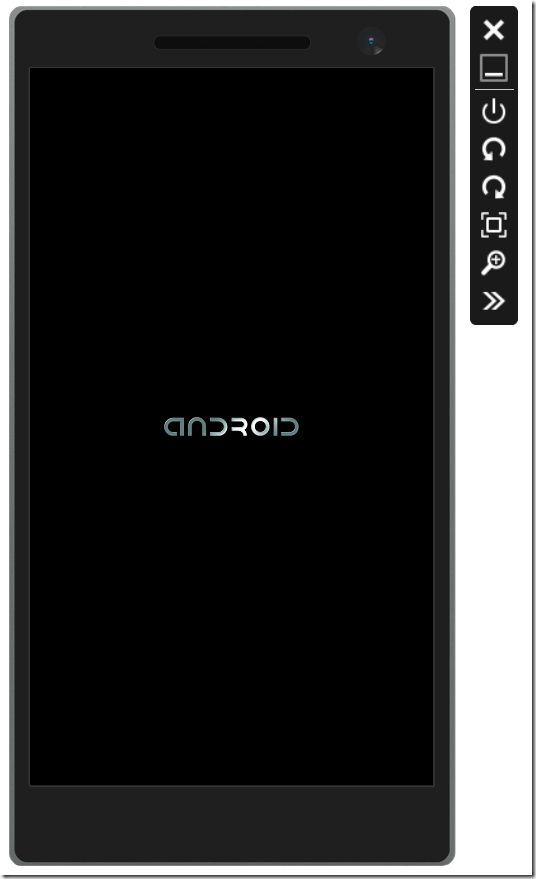 The debugger team has definitely heard your feedback that you want debugging support for LINQ (or lambdas in general) with Visual Studio 2015 preview we are pleased to announce that the debugger now supports evaluation of lambda expressions! 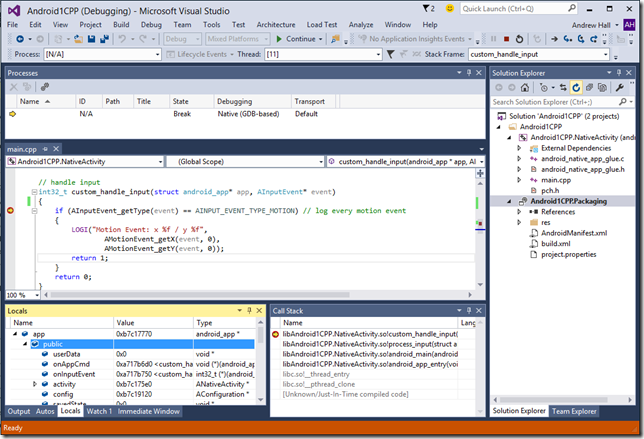 By now you will have heard the exciting news that Visual Studio 2015 supports C++ development on Android (and that includes an Emulator for Android).

Obviously no development experience is complete without debugging support, so this means that Visual Studio 2015 supports debugging C++ code running on Android.

Be sure and check out Andrew’s post on this topic: http://blogs.msdn.com/b/visualstudioalm/archive/2014/11/12/debugging-c-code-on-android-with-visual-studio-2015.aspx

In Visual Studio 2015 preview we have replaced the popup triggered from the authors indicator by a new popup named the Team Activity View. This view presents the same information, but in a more graphical way and therefore it makes it easier to discover patterns in the commits, which are not obvious on the list.  Be sure to check out Jean-Marc Prieur’s blog post for more information and Stuart rocking video:

Before any link type filtering applied

Code Map has several enhancements such as link filtering shown here, drag and drop from object browser and class view, the ability to create a new diagram from selected nodes and the ability to create a blank code map from the Architecture menu and several performance improvements.   Be sure and check back in the next couple of days for a drill down into this exciting visualizer.  Until then you can wet your appetite with Jean-Marc’s blog post Filter link types on Code Map and Stuart’s Connect video: https://channel9.msdn.com/Events/Visual-Studio/Connect-event-2014/213.

If you haven’t checked out the architecture tools in a while you are missing out: 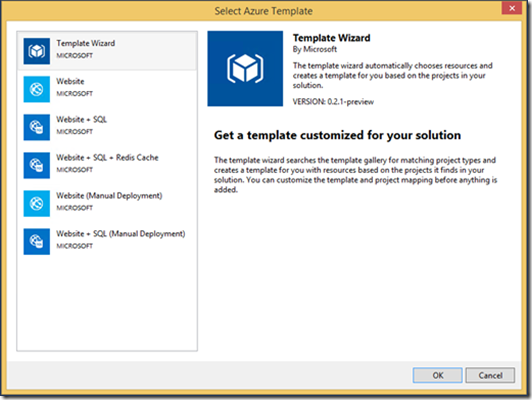 Visual Studio 2015 Preview and Azure SDK 2.5 can now decrease your release cycle times and time to response by helping you deploy your applications to an environment faster and easier than ever. This environment can then be shared across your team in Visual Studio Online.  Be sure and check out Brian Keller’s killer video showing these new features off.

“Smart Unit Tests” is a feature that assists you in finding bugs early, and reducing test maintenance costs. Using white-box code analysis and constraint solving Smart Unit Tests generates a suite of tests for every possible code path in your .NET code.  Smart Unit Tests will also automatically evolve the test suite as your code under test evolves. Saving you both time and driving higher quality.  Be sure and check my video playing with this exciting new technology!  https://channel9.msdn.com/Events/Visual-Studio/Connect-event-2014/215

All you have to do is connect Release Management client to your Visual Studio Online account –just that easy! 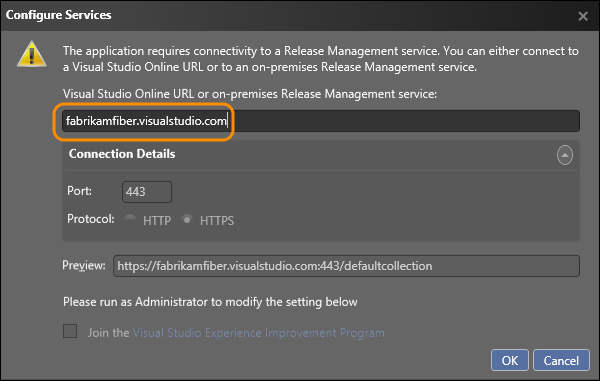 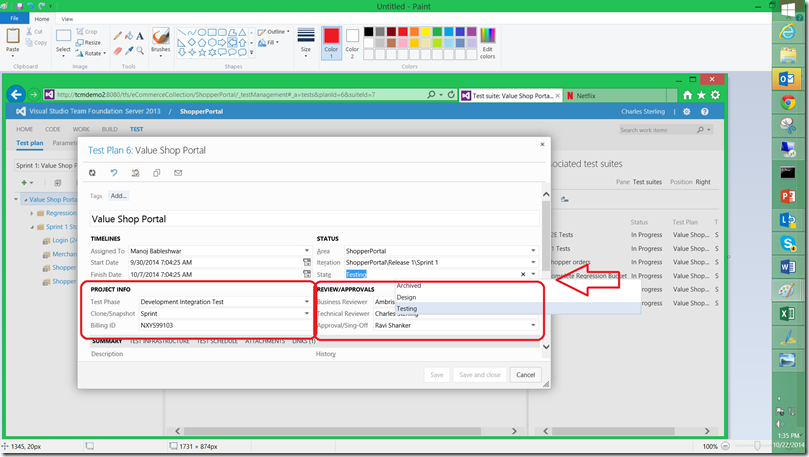 If you haven’t played with the Test Case management features in Visual Studio Online/Team Foundation Server do yourself a favor and take a look. 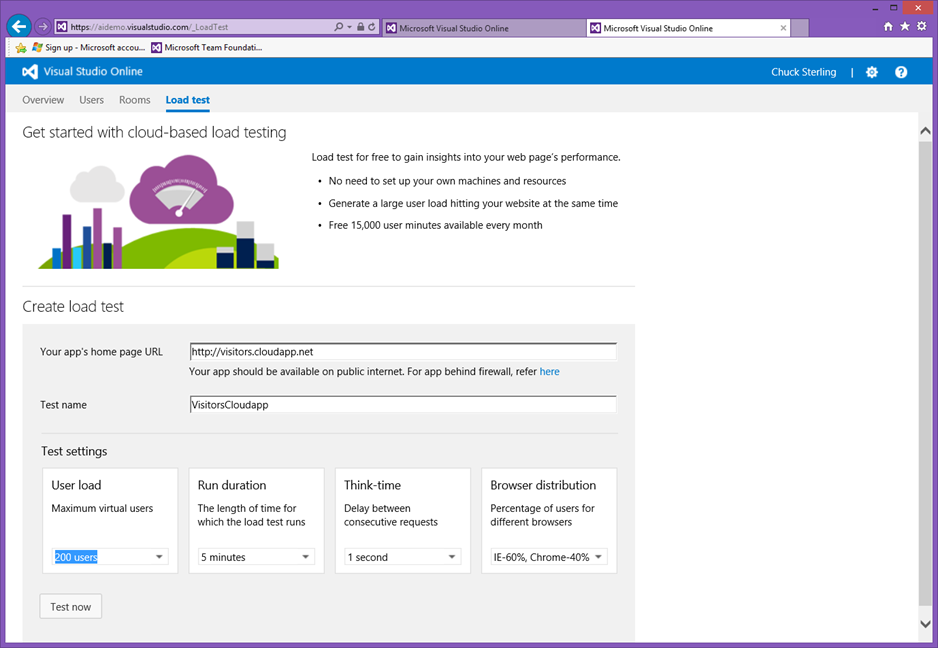 Yes i am partial to load testing since i work on that team…but we have done a bunch of really cool stuff for Visual Studio 2013 Update 4:

Of course we would love to hear from you!  In addition UserVoice, Connect and the new improved Send-a-Smile in the Visual Studio 2015 Preview adds the ability to send us bugs via a new dialog “Send-a-Frown”. 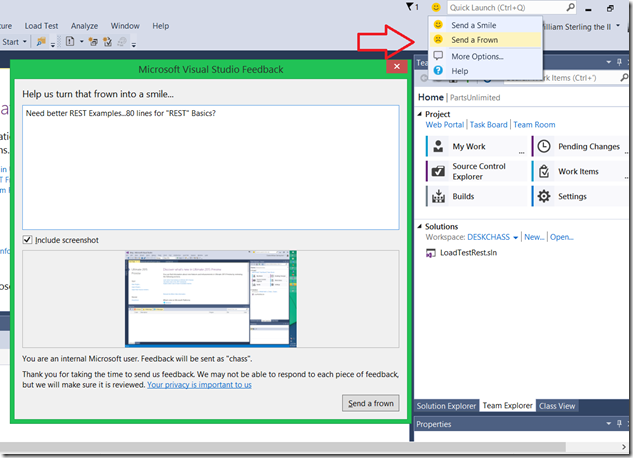 CodeLens in Visual Studio Online enabled as a Limited CTP
Update: Added a troubleshooting section.IntroductionCodeLens is a heads-up display in your Visual Studio Editor where you can find information about your code in-context...