This post describes a method to create a single bot service that runs on Azure and serves multiple bot applications. One of the benefits of this architecture is the ability to manage it as a single service instead of creating a separate bot service for each bot application. Instead, you can scale multiple services up or out, or manage payments and more at the same time. In this case, our bot service is configuration-based, so it is easy to write its engine and then apply it to all the different bot applications. You can also apply this approach to create a single service that hosts multiple bots and routes incoming requests to the relevant bot’s logic.

moed.ai offers a platform for scheduling services. Their customers can configure their services, resources and calendars using a designated dashboard. Resources can be objects such as cars or meeting rooms, as well as people like test drivers or sales representatives in an automobile agency. Each of these resources has a calendar defining its working hours that the platform manages and uses to schedule meetings with clients of moed.ai’s customers.

moed.ai’s scheduling platform is configuration-based, as there is no customer-specific code implementation. The same engine serves all of moed.ai’s customers.

To create one bot entity in the Bot Framework Developer portal and publish it on multiple websites or Facebook pages, we had to come up with a way to pass the customer’s ID along with each request that is sent to the bot service through the Bot Framework, so that the bot service will know who the relevant customer is, and use its configuration to process the request.

The problem was that there is currently no way to pass the customer’s ID along with the requests to the bot service.

For this approach, we need to register a new bot in the Bot Framework Developer portal for each of moed.ai’s customers, so that we will be able to provide a different Messaging Endpoint that encapsulates their ID:

For each of the bot entries in the Bot Framework Developer portal, we will have to maintain its application ID and password and expose the corresponding Messaging Endpoint REST API on our bot service. By having a different bot entity for each customer, the bot can be published on any of the channels that a customer requires (a Facebook page, a website, etc.). 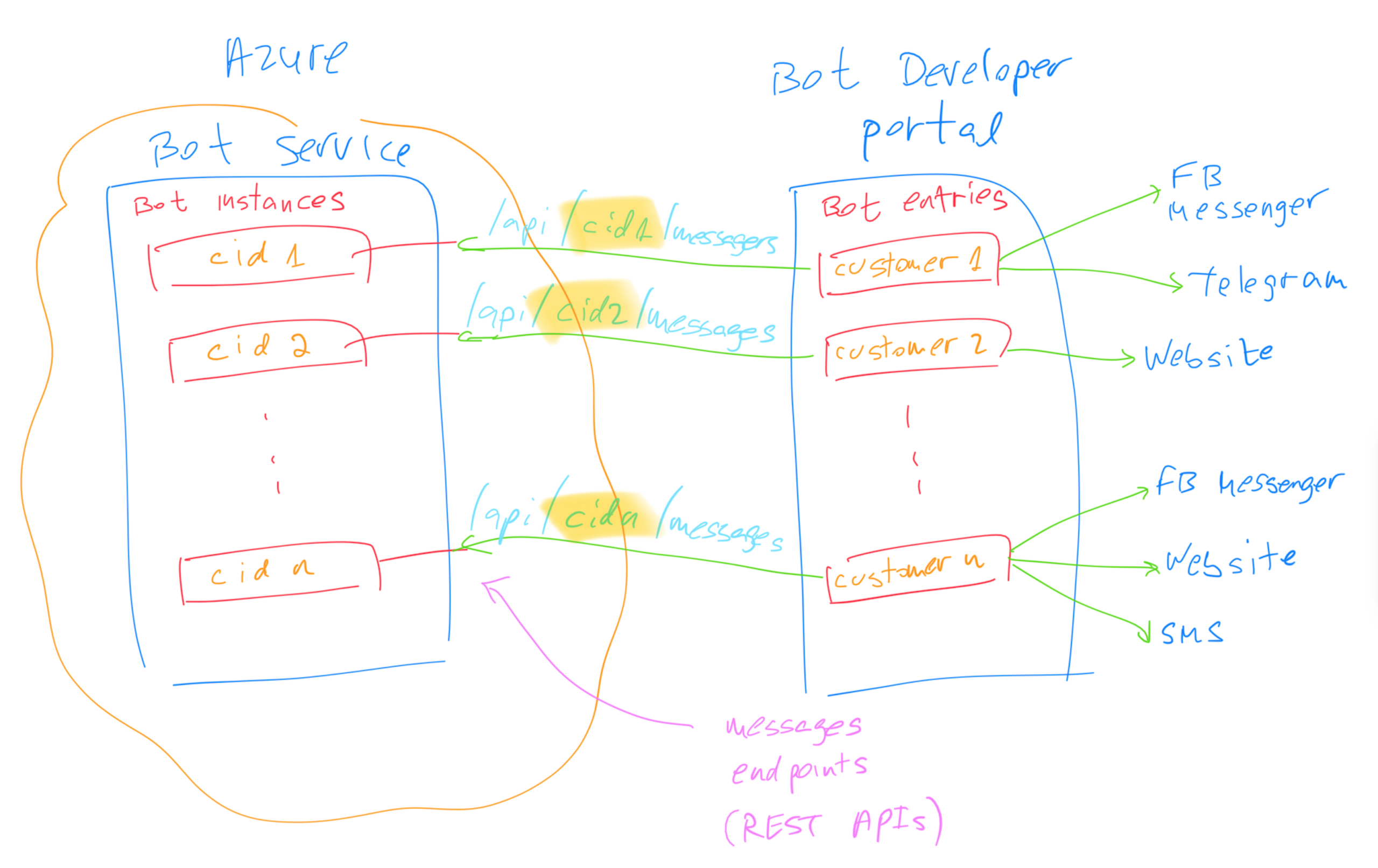 The main advantage of using this approach is that we only maintain and manage one bot service and we can also scale all of the bots together, by scaling that single bot service up or out.

Once we set up multiple bots on the Bot Framework Developer portal, we will implement a bot service that exposes REST APIs for each of these bots’ entries:

We are creating different bot and connector instances that capture the App ID and password for each customer, and binding it to the corresponding REST API that is used by the Bot Framework as the Messaging Endpoint.

When a call is made to one of the REST APIs, the relevant bot instance is used, and the correct customer ID can be utilized by the dialog’s internal logic to process the request (for example, to retrieve a customer’s configuration/rules and act upon them).

We could reuse this approach in similar scenarios to this one where a configuration-based platform serves multiple bots. Another possible case for reuse would be a scenario where one service hosts different bots. In that sort of situation, we will need to have different dialogs for each bot based on the client ID.

Building a Pipeline for Extracting and Graphing Entities and Relations from a Corpus of Documents
Learn how to build a pipeline for processing a corpus of documents to discover its entities and relations, then store the derived relations in a database representing a graph.