We previously discussed IncrediBuild, a software acceleration technology that speeds up your builds, tests, and other development process times. While IncrediBuild’s solution is known mainly for its impressive development acceleration capabilities, there’s another, very interesting capability to take note of: IncrediBuild’s Build Monitor tool. This elegant build visualization tool replaces your old text output with a sleek, intuitive graphic UI, transforming your build into a visual entity you can easily engage with, and helps you spot long durations, errors, warnings, bottlenecks, and dependencies.

Let’s take a look at the standard text output we’re all used to working with: 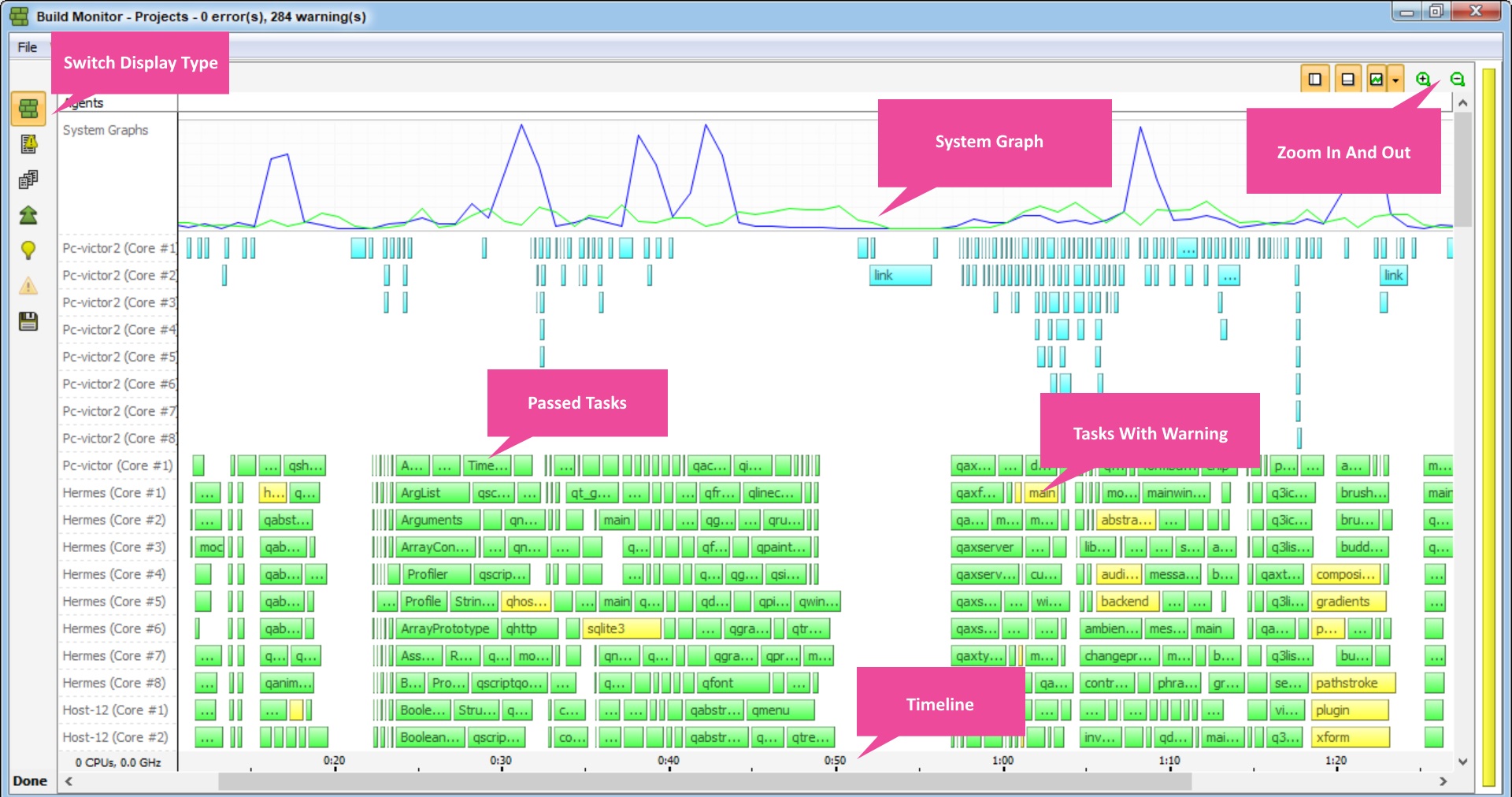 Each color represents the build task status, allowing you to immediately identify which build tasks were executed without a problem and which require your attention. The bar width represents the duration of a specific task, and the side navigation bar lays out the specific machine and core on which the task was executed.

However, that’s not all there is to it. This tool also includes:

If you want to see a more vivid demonstration of this tool, here’s a demo video of IncrediBuild’s Build Monitor tool.

Visualizing and speeding up your build

IncrediBuild’s Build Monitor tool comes hand in hand with IncrediBuild’s main benefit: its ability to highly accelerate C++ builds by enabling you to use the idle CPU cycles of other machines in your network, effectively transforming each local machine or build server into a virtual super computer with dozens of cores. We’ve discussed IncrediBuild’s effect on build times while building on even a single development machine in a previous blog post. However, to realize IncrediBuild’s full potential, and take advantage of its entire acceleration capabilities, it is recommended to deploy it on more machines and cores. Simply connect your colleagues’ IncrediBuild Agents with yours and each of you will be able to seamlessly use the aggregated idle CPU power of all the machines connected together.

Visual Studio 2019 allows you to leverage these capabilities free of charge (for your local machine) and get a real speed boost on your software development.

How to install IncrediBuild from the Visual Studio Installer

Once you have downloaded the Visual Studio 2019 installer, IncrediBuild is presented as an optional component for C++ workloads. 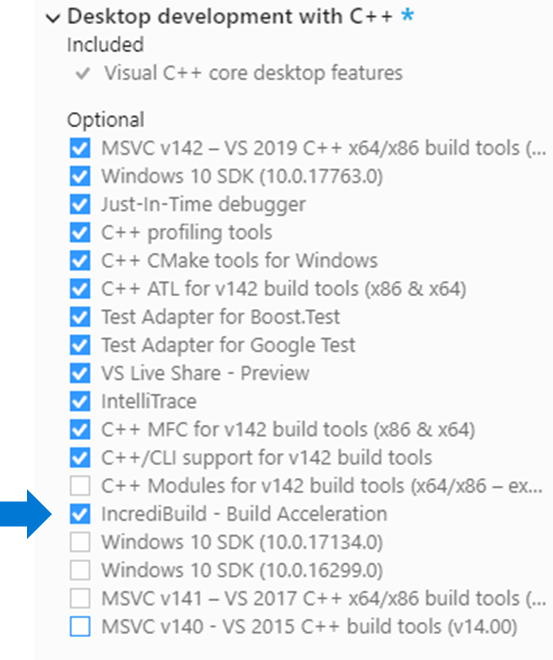 After checking the IncrediBuild checkbox your Visual Studio installation will come with an Incredibuild submenu under the “Extensions” menu.

After installing IncrediBuild within Visual Studio, you’ll have the Build Monitor display available to you upon initiating a build using IncrediBuild.

We encourage you to download Visual Studio 2019 and try the IncrediBuild functionality. We can be reached via the comments below or via email (visualcpp@microsoft.com). If you encounter other problems with Visual Studio or have other suggestions you can use the Report a Problem tool in Visual Studio or head over to the Visual Studio Developer Community. You can also find us on Twitter (@VisualC).

Nick Uhlenhuth
May 14, 2019
14 comments
CMake 3.14 and Performance Improvements
In Visual Studio 2019 version 16.1 we have updated the version of CMake we ship inbox to CMake 3.14. This comes with performance improvements for extracting generated ...