Take control of your vcpkg dependencies with versioning support

We have an exciting new feature to announce in vcpkg: the long-awaited and highly requested package versioning! This feature makes it possible to install specific versions of dependencies and control installed versions over time. In order to use this feature, a vcpkg.json manifest file must be present in your repo to declare dependencies. Versioning is not currently available for libraries installed via the command line (i.e. vcpkg install library_name commands). The versioning feature is completely optional – you can choose not to specify library versions, and vcpkg will pick the most appropriate set of compatible versions for your dependencies from its baseline catalog. For now, we are considering this feature experimental. Please give us your feedback and let us know how we can improve.

For the past year we have been focusing our efforts on implementing highly requested features in vcpkg that will help our users in a wide variety of scenarios. Two such features are manifests and binary caching, which we announced some time ago, and users have been successfully using them in their projects since then. Today, we are announcing support for another anticipated feature: Package versioning. With this feature users will be able to:

Getting started with versions

To enable versioning, you must turn on the “versions” feature flag. There are several ways to do this:

In the example below, we will be using Visual Studio Code to create a simple CMake project that automatically reads a vcpkg manifest file and installs dependencies. You can do this in Visual Studio as well. For information on how to set up Visual Studio for use with vcpkg with manifests (for MSBuild or CMake), see vcpkg: Accelerate your team development environment with binary caching and manifests.

Begin by creating a folder with the following files:

vcpkg has new version declaration properties when you use manifests. Previously, you could only declare versions for your projects using the “version-string” property. Now that versioning has come around, vcpkg is aware of some new versioning schemes.

The selected versioning scheme has consequences in what vcpkg will allow as a valid version string and the rules for ordering versions. You can read more about versioning schemes in our documentation.

And lastly, we declare a “builtin-baseline”, the value of which is a commit SHA from the vcpkg repository.

The set of libraries and versions listed above can be described as the baseline versions for the dependencies used in this project. Baseline versions get added as additional minimum version constraints when resolving package versions.

[Above] This is a simple single file program to test that dependencies are correctly installed.

[Above] To use vcpkg manifests with a CMake project, it is necessary to add find_package and target_link_libraries functions to identify your dependencies in CMakeLists.txt. This experience is the same whether a package manager like vcpkg is being used or not. Including these lines makes it possible for dependencies to be included in builds.

[Above] This is the output produced by the CMake command line when generating the CMake cache. In Visual Studio Code, with the CMake Tools extension installed, the cache can be generated with the “CMake: Configure” command.

You will know that versioning is working if you notice the “<path-to-vcpkg>/buildtrees/versioning/versions/<portname>/<sha>” pattern in the paths. The port files are being checked out by vcpkg for the declared versions at those locations.

Since baselines establish a version floor for all packages and explicit constraints get upgraded when they are lower than the baseline, we need another mechanism to downgrade versions past the baseline.

The mechanism vcpkg provides for that scenario is overrides. When an override is declared on a package, vcpkg will ignore all other version constraints either directly declared in the manifest or from transitive dependencies. In short, overrides will force vcpkg to use the exact version declared, period.

First, change your manifest to add an override on fmt and force vcpkg to use version 6.0.0:

Next, delete your build folder, generate the CMake cache, and build again:

How versioning works in vcpkg

In the diagram below we depict the chronology of versions released for four different libraries: FMT, zlib, Boost and Azure’s core C++ library. 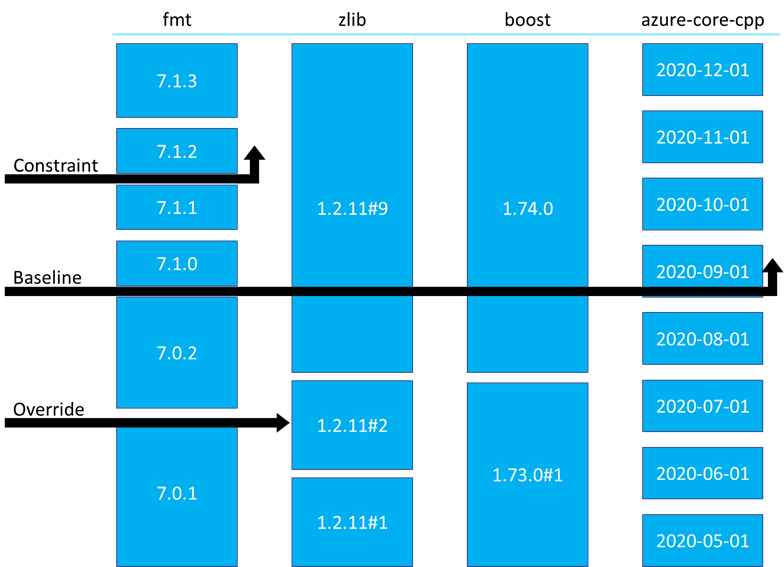 The vcpkg versioning system is comprised of the following pieces:

To enable versioning, it is required that you set a baseline to a specific vcpkg commit. By selecting a baseline, you are selecting a snapshot of a certain point in time of the chronology. Setting the baseline will set a minimum version floor on all your dependencies, the minimum versions being the ones that existed at the selected snapshot. In the picture above, we would have version 7.1.0 for FMT, version 1.2.11 at port revision 9 for zlib, version 1.74.0 for Boost and the September 2020 release for Azure’s Core C++ library. An advantage of using baselines is that versions that are contemporary are more likely to be compatible. The main vcpkg registry does, after all, build all libraries it contains at the same time to try to ensure compatibility of the whole catalog at every commit.

In contrast with baselines that set minimum versions for all packages, constraints allow you to specify a minimum version in a package-by-package basis.

Constraints only allow you to upgrade versions further than those at the baseline. As stated above, the baseline sets a minimum version floor for all packages, so if you attempt to add a constraint that is lower than the baseline, the constraint will be upgraded.

An important thing to notice about constraints is that they are transitive where baselines and overrides are not. Dependencies in the graph can express their own constraints and they will be considered by the version resolution algorithm.

But what if you really need to set a version to be lower than the baseline? How can you do it without lowering the baseline? For those cases, you can use overrides.

An override forces vcpkg to use a specific version while ignoring all other constraint (either explicit or transitive). This allows the user to solve some specific situations like:

In the scenario depicted in the diagram, given all that we know about baselines, constraints, and overrides. We can see that version resolution for a project using all four packages would result in:

The last thing to discuss is how overlay ports interact with versioning resolution. The answer is: they do not interact at all by design. Going into more detail, when you provide an overlay for a port, vcpkg will always use the overlay port without caring what version is contained in it. The reasons are two-fold: (1) it is consistent with the existing behavior of overlay ports (completely masking the existing port), and (2) overlay ports do not (and are not expected to) provide enough information to power vcpkg’s versioning feature.

If you want to have flexible port customization along with versioning features, you should consider making your own custom registry. See our registries specification for more details.

If you’re interested in delving deeper into the details of how versioning works we recommended that you read the original versioning specification.

Registries: Bring your own libraries to vcpkg
Special thanks to Nicole Mazzuca for providing the content of this blog post. Are you working on a C++ project with library dependencies? Are you tired of maintaining...

Augustin Popa
February 25, 2021
2 comments
Remote Debug Support in Visual Studio 2019
Visual Studio 2019 offers remote debug support for MSBuild and CMake projects targeting Windows and Linux. Thanks to remote debugging, our customers can target a wider, more diverse range of scenarios. We offer the flexibility to customize your deployment and automatically copy any dependencies needed to the target machine.