We made improvements to C++ link time earlier in Visual Studio 2019, and we have more improvements to tell you about. As of version 16.7, we measure up to 5X improvement in some incremental linking and debugging scenarios and up to a 1.5X speedup in full linking. These represent some of the improvements The Coalition saw in their recent experiment. Keep reading to find out the details.

After the link time improvements in versions 16.0 and 16.2, we took a step back and re-evaluated the complete edit-build-debug (“inner loop”) experience of C++ developers. We were still looking at large projects like AAA games and Chrome because large projects are most likely to suffer from longer iteration times. We found a couple of opportunities that looked promising and went after them. The first, in Visual Studio 2019 version 16.6, is an improvement to some of the algorithms inside the Program Database (PDB) and Debug Interface Access (DIA) components, which are the libraries that enable writing and reading debug information respectively. The second, in Visual Studio 2019 version 16.7, is an optimization to speed up the worst case Incremental Linking time, which can be as bad as or worse than a full link.

Program Database (PDB) creation is often the bottleneck when linking binaries, and for large, monolithic codebases, linking ends up being a very long pole at the end of the critical path. Furthermore, PDB reading is a significant contributor to delays when debugging large projects. It features prominently in profiles when hitting breakpoints and single-stepping—particularly when the developer has multiple debug windows like the Call Stack and Watch windows open in Visual Studio.

In our private benchmarks, these improvements showed some big gains in AAA Games and other large scenarios. The following chart has some examples of the improvements we saw. Note that the absolute time deltas in the chart are examples taken from different projects. However, all are indicative of the type of speedup we saw across multiple projects. That is, they are not cherry-picked outliers. To summarize, we often saw:

Perhaps more compelling, though, is that since version 16.6 was released, the time to enter break state after a single step is faster by about 2X on average. The actual benefit depends on the size of your project and the number of debugger windows (watch, callstack, etc.) you have open, but the good news is that users who encountered stepping delays in the past are likely to notice improvements in version 16.6.

For version 16.6, we profiled some common developer scenarios and found several opportunities to improve the code that both reads and writes debug information. Below are some examples of the types of algorithmic improvements we made.

Note that the first item, caching the previous request’s result, was responsible for the vast majority of the PDB reading wins.

Incremental linking is one of the most time-saving features of our toolset. It allows developers to iterate quickly when making common source changes in large projects by reusing most of the results of earlier links and strategically applying the differences made in the last source edit. However, it can’t accommodate all source changes and will sometimes be forced to fall back on full linking, which means the overall incremental link time can actually be worse than a full link, since incremental linking will spend time figuring out it can’t proceed before starting over from scratch. It makes sense that high-impact edits, like changing compiler or linker options or touching a widely-included header file require a rebuild, but simply adding a new object (.obj) file will also trigger a full re-link. For many developers, this isn’t a big deal since they rarely add new object files and/or full linking isn’t terribly long anyway. However, if you work on large binaries or you use a coding style or project system (like some variants of a Unity build) that commonly results in object files being added or removed, the hit to incremental link time can be tens of seconds or more. Unfortunately, these limitations are fundamental to the design of incremental linking and removing them would mean slowing down the most common case that incremental linking is optimized for: simple source edits to small numbers of existing translation units.

In version 16.7, though we couldn’t reasonably make incremental linking work in more cases, we realized that we could improve how long it takes to link when we must fall back on full linking. The key insights were:

Conceptually similar to how incremental linking works, we added the ability to cache the results of earlier debug information generation (specifically, the result of type merging) and reuse that during subsequent links. This technique can mean drastic speedups (2X-5X) in link time when incremental linking falls back on full linking. The following chart has some examples of the impact on three AAA Game projects and Chrome. 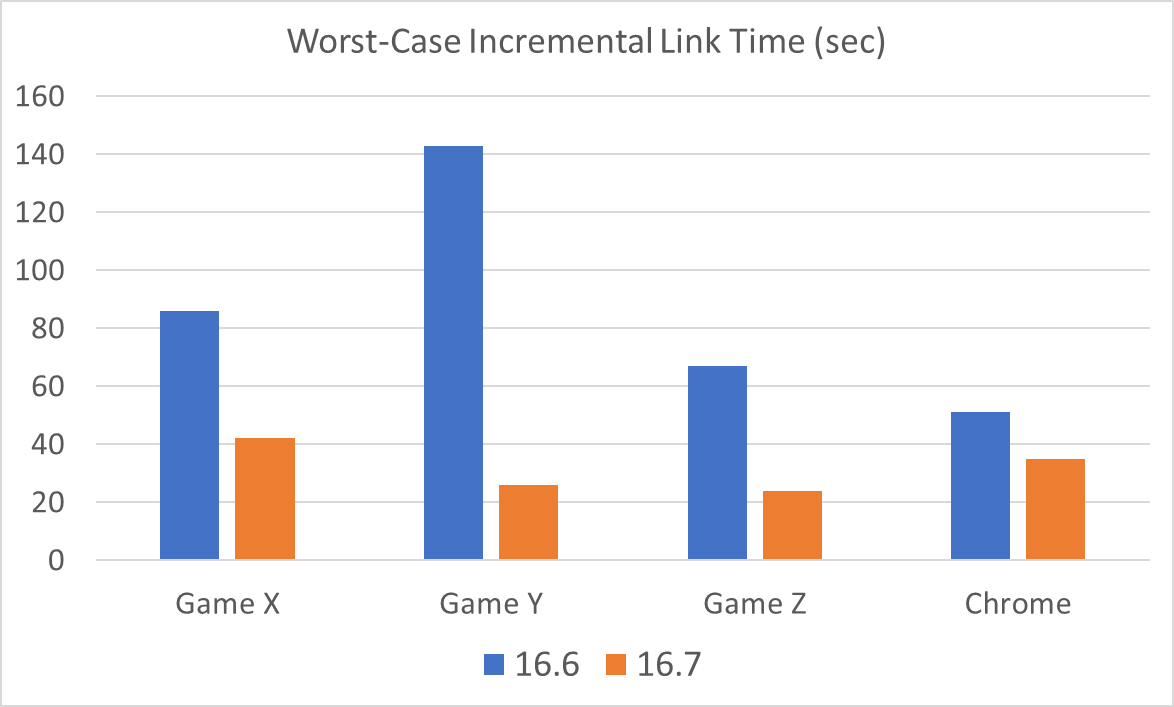 This caching does have some downsides, though:

The following table captures the benefits as well as downsides for the above projects.

The “Subsequent full link time” column corresponds to a scenario where incremental linking is enabled (/INCREMENTAL) but had to fall back on full linking, such as when a new object file is introduced. As you can see, the impact of this new cache can be substantial when the full link time is measured in tens of seconds or minutes.

It’s interesting to note that the cache could be used for any full linking scenarios, not just the case when incremental linking must fall back to a full link. However, because of the drawbacks, it’s only on-by-default when incremental linking is used. Release builds and builds where incremental linking is disabled (/INCREMENTAL:NO) won’t see an impact unless the new /PDBTMCACHE linker switch is specified. Similarly, the /PDBTMCACHE:NO switch can be used to disable the cache creation and return to version 16.6 behavior if desired. Note that the linker does not rely on the presence of the cache. If the cache is present and passes validation, the linker will use it to accelerate linking, but a missing cache or a cache that has been invalidated is silently ignored.

We know there are at least a few people for whom the PDB size impact of the Type Merge Cache will be a concern, so, in the future, we might consider placing the cache in a separate file. We didn’t put it in the incremental link file (.ilk) because the feature isn’t fundamentally tied to incremental linking—that’s why there is a switch to control it independently.

Upgrade today and let us know about the difference you see

We profiled developer inner loops in several scenarios that we track, and we tamped down a couple of hot spots that stood out in PDB reading and writing and incremental link fall-back. Did you notice a difference when upgrading from version 16.5 or earlier to 16.6 and/or 16.7? If so, we’d love to hear about them in the comments below or via email (visualcpp@microsoft.com). If you’ve got a problem or would like to share other feedback, please use Help > Send Feedback > Report A Problem / Provide A Suggestion in Visual Studio or go to Developer Community. You can also find us on Twitter (@VisualC)). And, of course, if you haven’t tried Visual Studio 2019 yet, we’d love for you to download it and give it a try.

Xiang Fan
January 14, 2021
5 comments
C++ with Visual Studio and WSL2
Our team released native support for C++ with the Windows Subsystem for Linux (WSL) in Visual Studio in 2019. “Native support” means that all commands are executed ...