If you’re just getting started with CMake in Visual Studio, a better resource will be the overview blogpost for CMake suport in Visual Studio that will walk you through the full experience including the latest updates mentioned in this post. Additionally, if you’re interested in the “Open Folder” capability for C++ codebases that are not using CMake or MSBuild, check out the Open Folder for C++ overview blogpost.

This RC update adds support to the following areas: In case you prefer project isolation, you can still create CMake configurations that are unique to a specific CMakeLists.txt file (via the CMakeSettings.json file). In that case, when the particular configuration is selected, only that CMake project will be available for building and debugging and CMake-based C++ IntelliSense will only be available to its source files. Cancel CMake generation. As soon as you open a folder with a CMake project or operate changes on a CMakeLists.txt file, the configuration step will automatically start. If for any reason, you don’t expect it to succeed yet, you can cancel the operation either from the yellow info-bar in the editor or by right-clicking on the root CMakeLists.txt and selecting the option “Cancel Cache Generation”

Default CMake configurations have been updated. By default, VS offers a preset list of CMake configurations that define the set of switches used to run CMake.exe to generate the CMake cache. Starting with this release, these configurations are “x86-Debug”, “x86-Release”, “x64-Debug” and “x64-Release”. Note that if you already created a CMakeSettings.json file, you will be unaffected by this change. All CMake operations have been centralized under a “CMake” main menu. Now you can easily access the most common CMake operations for all the CMakeLists.txt files in your workspace from a central main menu called “CMake”. 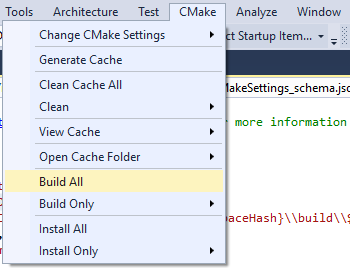 More granular CMake cache operations are now available. Both in the main menu as well as in the CMakeLists.txt context menu, there are several new operations available to interact with the CMake cache:

Build individual CMake targets. VS now allows you to select which target you want to build in addition to opting for a full build. CMake install. The option to install the final binaries based on the rules described in the CMakeLists.txt files is now available as a separate command.

Debug settings for individual CMake targets. You can now customize the debugger settings for any executable CMake target in your project. When selecting “Debug and Launch Settings” context menu for a specific target, a file launch.vs.json is created that is prepopulated with information about the CMake target you have selected and allows you to specify additional parameters like arguments or debugger type. We hope you enjoy these updates and you’ll keep the feedback coming.

vcpkg 3 Months Anniversary, Survey
vcpkg, a tool to acquire and build C++ open source libraries on Windows, was published 3 months ago. We started with 20 libraries and now the C++ community has added 121 ...

EricMittelette
January 11, 2017
0 comment
`yield` keyword to become `co_yield` in VS 2017
Coroutines—formerly known as “C++ resumable functions”—are one of the Technical Specifications (TS) that we have implemented in the Visual C++ compiler. We’ve ...