Last year in November, we released an out-of-band customer technology preview (CTP) of the Visual C++ compiler. It contained preview versions of C++11 features which we subsequently fully released in Visual Studio 2012. At that time, and at GoingNative 2013 this year, we promised to keep releasing these CTPs to show our progress towards full C++11 and C++14 standards conformance. Today, we are happy to update the map: 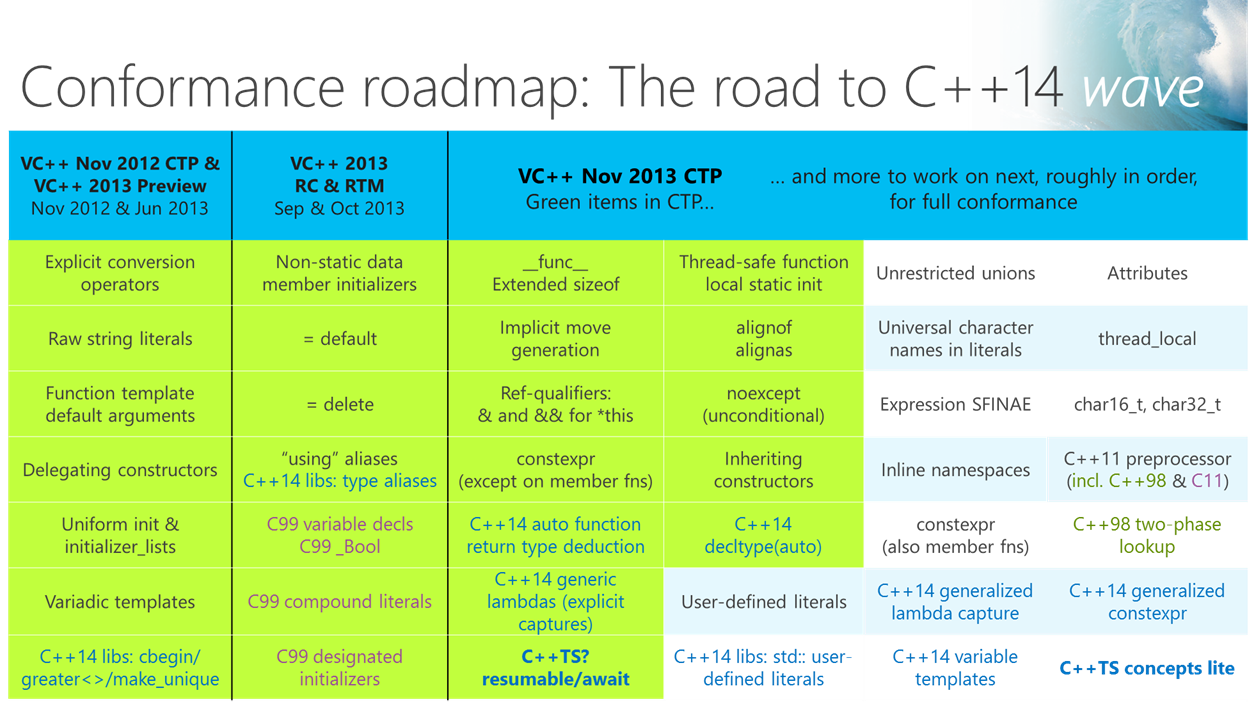 Today, we deliver on that promise.

Download the November 2013 CTP of the Visual C++ Compiler now. Breaking changes can be found here.

Stephan T. Lavavej has created helpful and informative videos about these language features in part 10 of his Core C++ series of videos on Channel 9.

Before downloading, note the following:

One of the main reasons for this release is the gathering of community opinions and bug reports so that we can improve the quality of the compiler. If you find any bugs, and there are certainly many, please submit a report for Visual Studio via Microsoft Connect and use “[Torino]” as a prefix in the bug title. You can also leave comments below and submit suggestions via Visual Studio UserVoice or the integrated Send-a-Smile feature.

We are thankful for your support, and we hope that you have fun in using all these shiny new features in your code. Remember, you can grab the CTP here. Learn more about the features in the CTP from STL on in Core C++ 10 on Channel 9.

Visual Studio Rename Refactor Helper for Visual Studio 2013
The C++ language is large and complex with context-sensitive syntax subtleties that make it difficult to create a reliable and fast rename refactoring tool. For years we ...

Eric Battalio
November 19, 2013
0 comment
C++ AMP to target Khronos SPIR and HSAIL
The Parallel Programming in Native Code blog recently announced Clang support for C++ AMP via LLVM backend. This is a key milestone in our commitment (as mentioned in ...