Welcome to our first Windows Terminal release of 2021! This release brings new features to Windows Terminal Preview version 1.6 as well as moves Windows Terminal to version 1.5, which includes the features from this previous blog post. You can download both versions from the Microsoft Store or from the GitHub releases page. Below are some of the highlights in this release, however we recommend checking out the release notes to see everything that has improved with version 1.6.

It’s finally here! Windows Terminal Preview now includes the alpha release of our new settings UI. The settings UI is not yet bound by default and will not open when clicking the settings button in the dropdown menu, so you will need to add an action to your settings.json file in order to open it with either the command palette or your keyboard. How to open the settings UI

To bind the settings UI to Ctrl+Shift+,, add the following to your actions array (or keybindings if you have an older version of the settings file):

While the settings UI remains in preview, we will be generating backups of your previous settings files in case something were to go wrong with editing your settings and you need to revert. These backup files can be found in the same location as your settings.json file. The easiest way to navigate here is to right click on the tab of the settings.json file in Visual Studio Code and select “Reveal in File Explorer”. Thank you to the community

We’d like to give a special shoutout to those who have contributed to the settings UI. It originally started as a hackathon project and we built upon it to deliver the experience you see today. We’d like to thank @almedina-ms, @xerootg, @scott-armiger, and @vineeththomasalex for their hard work in helping us get the settings UI up and running!

We are still actively working on the settings UI and will be continuously shipping updates. Here are a few things we’re working on now:

Have you been wanting to start your terminal in a custom configuration when you launch it? Well today is your lucky day! You can now set startup actions in your global settings to configure how your terminal launches (Thanks @Don-Vito!). The startupActions setting accepts wt command line arguments. More information on command line arguments can be found on our docs site.

As a new experimental feature, you can now use HLSL pixel shaders inside your profile (Thanks @mrange!). Some examples of shaders can be found in our repository. 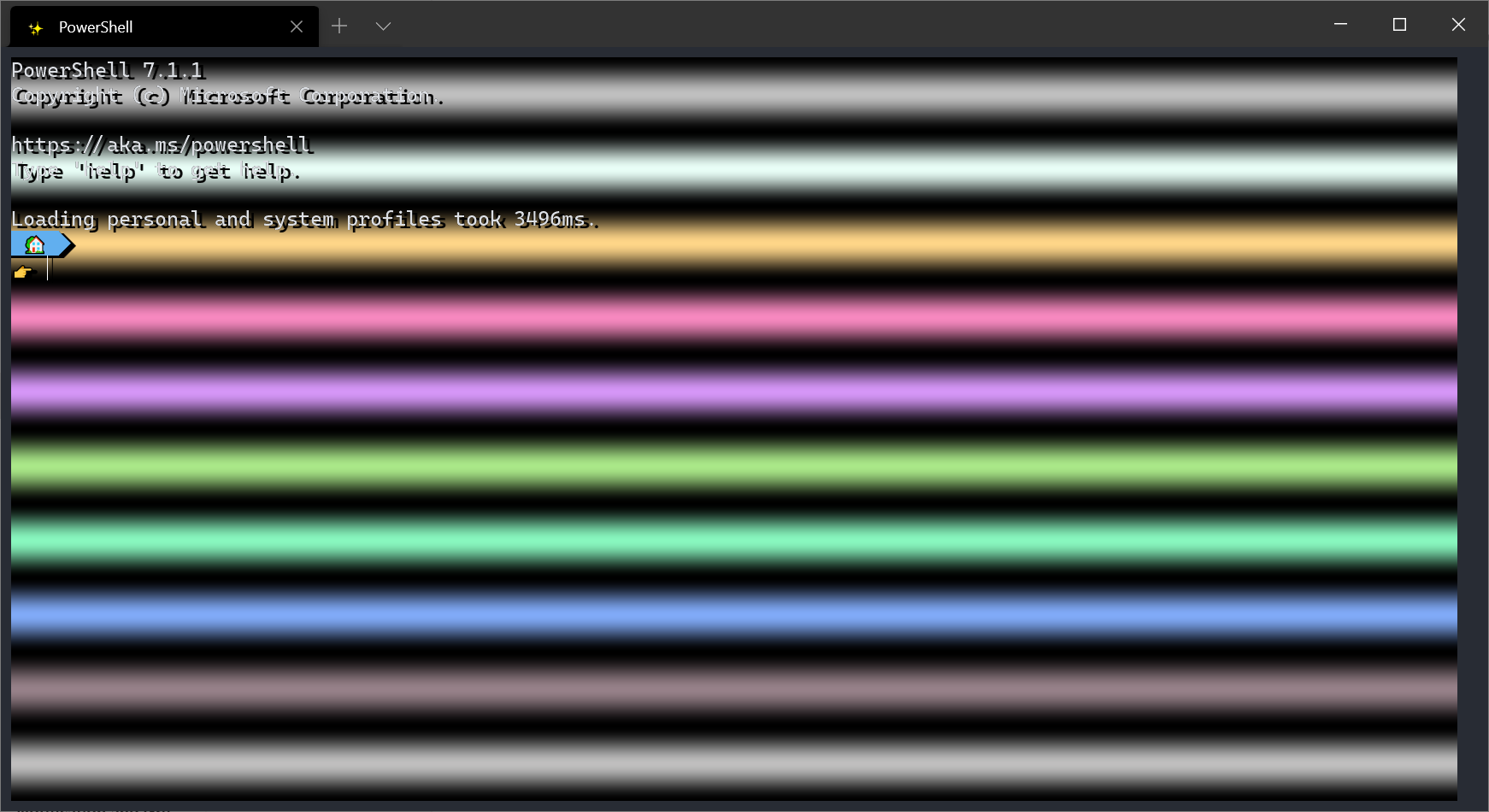 Scroll to the top and bottom of history

You can use the scrollToTop and scrollToBottom commands to scroll to the beginning or end of the text buffer (Thanks @Hegunumo!).

Focus on most recently used pane

The moveFocus action has gained a new direction, previous, that will let you navigate to the last used pane with your keyboard.

You can now move your tabs backward (left) and forward (right) using the keyboard with the moveTab command (Thanks @Don-Vito!).

👉 Note: This action is not bound by default.

🌟 The splitPane action and split-pane, sp command line argument now accept a size parameter to define the size of the pane.

🌟 The move-focus command line argument has also been added, so you can specify which pane to focus when launching the terminal using the command line.

🌟 You can now specify a tab color for each new tab or pane through the command line with --tabColor #rrggbb (Thanks @Don-Vito!).

🌟 The terminal now supports ConEmu’s OSC 9;9 sequence, which sets the current working directory. If you emit OSC 9;9;<Windows path>, creating a duplicate of that pane or tab will use the Windows path you specified (Thanks @skyline75489!).

🌟 When you emit a BEL, the terminal will display the bell icon in the tab. You can also now set the bell style to "visual", which will cause it to flash the taskbar.

🌟 You can now have a double underscore cursor in the terminal (Thanks @rhorber!).

🌟 The command palette now supports "launchMode", which can be set to "action" or "commandLine" (Thanks @Don-Vito!).

🛠 The “Open Windows Terminal here” menu item will now show up inside directories (Thanks @hereafter!).

🛠 The command palette, while in command line mode, will now parse and validate commands you’ve typed and display recently used commands (Thanks @Don-Vito!).

🛠 Starting a search with text selected will now copy that text into the search field (Thanks @Don-Vito!).

🛠 The terminal has received approximately a 33% performance improvement in the total runtime of bulk text output (Thanks @austin-lamb!).

🐛 Hyperlinks will display an underline on hover even when the window isn’t focused (Thanks @Hegunumo!).

🐛 When most-recently-used tab switching is enabled, closing a tab will move you to the previously-used tab (Thanks @Don-Vito)!.

🐛 The profile menu and command palette will now prefer your shortcut keys over the built-in ones (Thanks @Don-Vito!).

This is our biggest release since we initially launched in 2019 and we’d like to acknowledge the community members who went above and beyond!

Full documentation for all of our features can be found on our docs site. If you have any questions or feedback, feel free to reach out to Kayla (@cinnamon_msft) on Twitter. If you find any bugs or would like to request a new feature, you can file an issue on GitHub. We hope you like this latest release of Windows Terminal Preview and we’ll see you at the next one!