[2018-06-29: Important Note: As announced in the release notes for Windows 10 Insider build 17704, Sets and Tabs will NOT ship in the next mainstream release of Windows (codenamed RS5). Please read the first bullet under the heading “General changes, improvements, and fixes for PC” for more details.]

For quite a while now, the most up-voted open item in our Windows Console UserVoice has been an ask for Console to support multiple tabbed pages.

The new “Sets” UX is being applied liberally to many Windows apps and tools, including File Explorer, and … in our case … Windows Console! 🙂

In the screenshot below, you can see that the PowerShell Console has one tab in the title-bar, indicating that this set contains one member app! To the right of this tab, is a + button that you can click to create a new tab (alternatively, you can create a new tab by hitting WIN + CTRL + T). 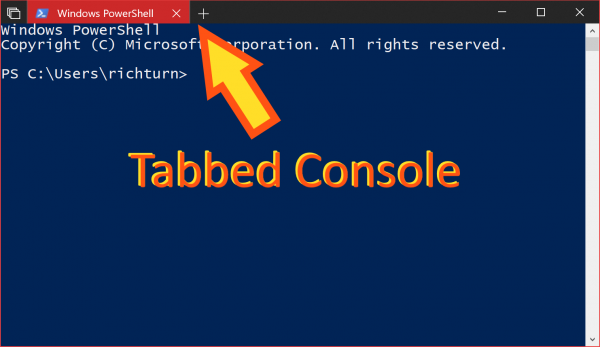 Here are a few keyboard shortcuts you can try out:

Thanks in advance for your support & feedback! We look forward to hearing from you!

Michel Lopez [MSFT]
May 8, 2018
5 comments
Join us for a hot cup o Chocolatey!
Setting up a dev box should be easy and fast.  At BUILD 2018 we announced a collaboration with Chocolatey and Boxstarter.  The project founders discuss the ...