SSH is one of the most important tools in the *NIX world, through which users communicate with shells, applications, and services running on remote machines, devices, VM’s and containers. Windows users most often remotely access Windows machines, devices, VM’s and Containers via the amazingly powerful Remote Desktop Protocol (RDP) which, as the name says, remotes the entire Windows UX.

But sometimes you only want to access & drive command-line tools – for which, RDP is both overkill and a poor fit. For this reason, PowerShell users use PowerShell Remoting which offers similar features to SSH, but via a different communications protocol (based on WinRM), and also requires that the remote system is running Windows PowerShell, which many non-Windows systems do not run (… yet! 😜).

However, many Windows users want/need to access, operate, and/or administer remote UNIX/Linux environments and often have to seek out 3rd party alternatives if they want to SSH into remote machines.

Until now, that is!

Windows 10 Insider builds & Windows Server now include a beta release of the OpenSSH client and server for you to try! Each are available as independent optional features that you can choose to install if you want to be able to employ SSH from the Windows command-line.

For full details of OpenSSH on Windows, along with instructions on how to enable it, and examples of how to use it, please spend a few minutes reading Joey Aiello’s great announcement post! 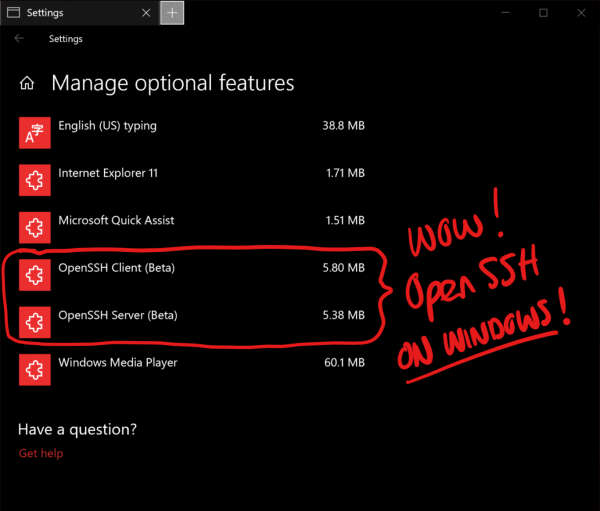 Again, note that this is a beta release, and that you should expect issues and incomplete features, but the team would love to hear your feedback, and even your assistance via the Win32-OpenSSH GitHub hosted project!

Windows/WSL Interop with AF_UNIX
Starting in Windows Insider build 17093, a WSL application can communicate with a Windows application over Unix sockets. Back in December, we blogged about bringing ...

Craig Wilhite
February 7, 2018
1 comment
Automatically Configuring WSL
Beginning with Insider Build 17093, we added a method for you to automatically configure certain functionality in WSL that will be applied every time you launch the ...