Over 500 extensions in the VSTS/TFS marketplace

In November of 2015, almost 2 years ago, we launched the Visual Studio Team Services (VSTS) Marketplace to further our goals to build an open and active ecosystem around VSTS and Team Foundation Server.  It’s been a truly amazing thing to watch.  I’ve been humbled by how much passion and energy there has been to build and share extensions that make your development experience better.  This week, we passed 500 public extensions in the marketplace and we have a pretty steady rate of 20-30 new ones per month.  Demand for extensions has also been very strong with more than 100,000 installations.

The marketplace has been one part of our effort to broaden VSTS and TFS beyond its traditional Windows/.NET roots to be a great solution for DevOps for any application, running on any platform.  No area of the product has gotten more focus in that effort than our build and release (CI/CD) capabilities.  Not only have we worked hard to provide infrastructure and support for Java, Linux, Node and much more, but the marketplace has been a fantastic vehicle for the community to work together to build out a comprehensive set of tooling that cover the breadth of platforms, technologies and partners.

Of course VSTS and TFS are good solutions for deploying to Windows and Azure – and our integration, particularly for Azure, keeps getting better every sprint.  But nearly everyone has a wide range of technologies.  I wanted to take this moment of passing the 500 mark to highlight a few of the interesting extensions that really extend the reach of VSTS and TFS.  Please check out the marketplace for find the full list of hundreds of extensions.

Amazon has just announced their AWS Tools for VSTS.  You can install the AWS extension and also access the source code open source on GitHub. The AWS tools for VSTS allow you to deploy to AWS as part of your VSTS Build or Release pipelines and work with a number of AWS resources including S3 buckets, CloudFormation stacks, Elastic Beanstalk Deployments and Lambda functions with dedicated tasks or you can invoke the AWS command line tools to do most other AWS functions.

When we say VSTS supports ‘Any Developer, Any Application, Any Platform’ we really mean it. VSTS isn’t just a great story for developers of all languages deploying to Azure, it’s great for on-premises deployments and also now for AWS.  You can bet on VSTS as a DevOps orchestration system to manage your automation pipeline across all of your apps, stacks and environments.  While I’m thrilled to see Amazon make their AWS tools available to VSTS and Team Foundation Server (TFS) customers, it’s also great that engineers from Microsoft in our ALM Rangers community worked together with Amazon to create these tools as an open source project on GitHub.

Ansible is an open-source IT automation engine that can configure systems, deploy software and orchestrate application deployments.  Ansible uses Playbooks which express configurations, deployment, and orchestration steps in YAML format.  Each Playbook maps a group of hosts to a set of roles.

We recently published an Ansible Build and Release task into the marketplace to run Ansible playbooks – if you are an Ansible user we’d love you to take a look at the task and let us know what you think.

If you are a Chef user then we also have Chef tasks available in the VSTS Marketplace which provide a set of tasks to automate commonly performed build and release activities when using the Chef Automate platform.   You can also create your own Chef Automate server by launching one from the Azure Marketplace. 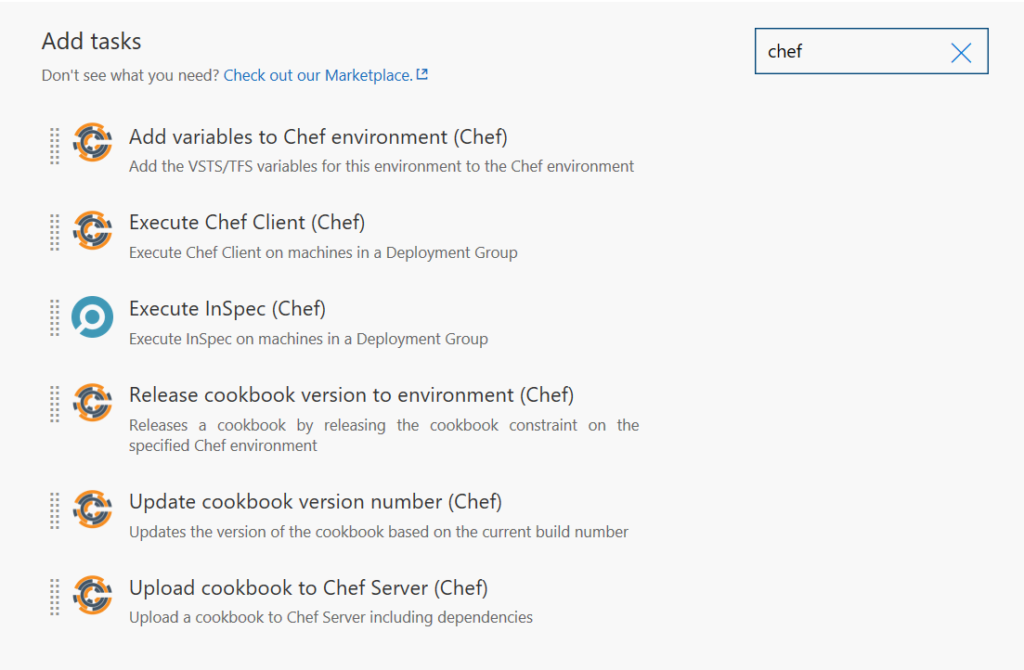 Containers are another area we have been putting increasing energy.  Itâ€™s a good example of something that we originally enabled via extensions in the marketplace & when it became clear how important containers are becoming we pulled them into the product.  We have broad container support today.  Linux containers as well as Windows containers.  Any container registry, from Docker Hub to Azure Container Registry.  We recently added Native support for the increasingly popular Kubernetes Orchestrator.  We have a lot more interesting container oriented features coming as well. Stand by! Lest you think CI/CD is only for services, we also have support for the major device platforms like Android, iOS and the Windows store to automate packaging, signing and delivery of your mobile applications.

While over half of the extensions in the VSTS Marketplace are related to our rich Build and Release pipelines, we have many more extensions available publicly to do everything from time tracking, integrating with your team chat tooling, extensions to our agile planning and issue tracking functionality, reporting metrics and dashboard widgets.  We also help deliver thousands of extensions that VSTS customers have created privately for their own accounts to customize their VSTS experience.  Because of the heritage of VSTS being a rich, open and extensible platform we have very deep support for building your own plug-ins.  If you would like to learn more about building your own extension then please head over to the documentation or take a look at our open source samples on GitHub.

Taking feedback
I'm going to try something very non-traditional for my blog. I don't know if it's a good idea or not but we'll give it a go and if everyone hates it, I'll find a ...

Brian Harry
August 18, 2017
0 comment
VSTS Update – Aug 28
This week we began rolling out our sprint 122 update for Visual Studio Team Services.  Check out the release notes for details. There are a couple of things I want to ...