We love the cloud and so do our developers. Xamarin developers have the ability to pick and choose a backend that fits their needs best and build out native cross-platform mobile apps on top of them, and Microsoft Azure offers a variety of services and integrations that make it easy to add a backend to apps that scale as they grow. Today at AzureCon, a full day Azure event, several announcements were made across all areas of Azure, including new Regions, Container Management Service, GPU-Centric VMs, and the exciting announcement of the general availability of Azure App Service Mobile Apps, which provides a full backend for all of your mobile apps.

Not only has Azure App Service gone GA, it’s also now easer than ever to try it without any commitment. Simply head over to Try Azure App Service to experiment with one of the three Xamarin-powered, cross-platform Azure-backed apps. With just a few clicks, an Azure App Service will be spun up and you’ll have access to full Xamarin apps ready to download and test out, including our new Xamarin CRM application. 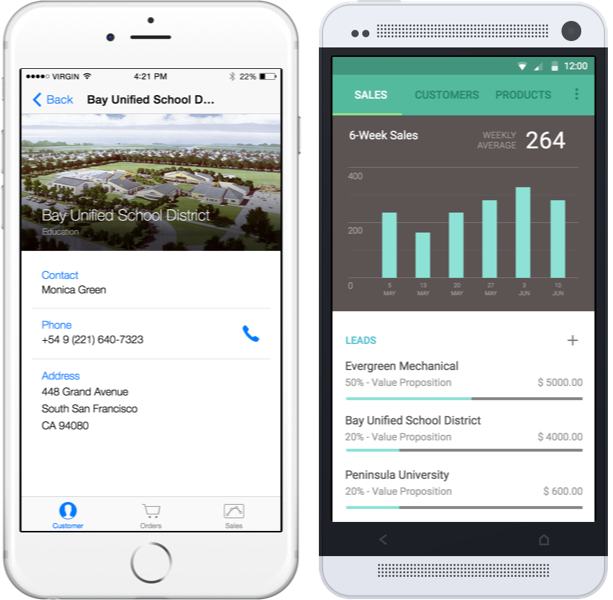 Speaking of apps, AzureCon covered several Xamarin and C#-powered apps that leverage Azure as their backend. First on stage was Chris Witmayer from Nascar showing off the Xamarin and Azure-powered International Motor Sports Association (IMSA) mobile app for iOS, Android, and Windows. In just under 13 weeks, the team brought together a full backend powered by several Azure services and created Xamarin mobile apps now available on the App Store and Google Play that provide IMSA fans with stats, live video, IMSA Radio, timing, scoring, and more each race weekend.

Next Mike Lorengo from Alaska Airlines spoke about their mobile app, Hopper, which enables their employees to book standby travel directly from their phones. Traditionally, employees had to log into an ASP website which was not responsive, but making the move towards becoming a mobile-only company, Alaska Airlines knew they needed a better way for their employees to book. Leveraging Azure App Service, Hybrid Connections, and API Management they seamlessly exposed their data to their Xamarin-built iOS and Android applications. On top of this, using continuous integration with Visual Studio Online they were able to commit, build, and release seamlessly. If you missed any of AzureCon today, don’t worry! You can still watch the full recording to see all of the awesome Xamarin apps showcased today. Then be sure to try it for yourself with the new Try Azure App Service website.

Fall into New Xamarin Events in October!
Dive into Xamarin this month with new events, seminars, Dev Days, user groups, and conferences happening in all corners of the globe! Find out what's new with Xam

Jayme Singleton September 30, 2015
0 comment
World Bank App Makes Complex Surveys Accessible Anywhere
The World Bank seeks to end extreme poverty and to push for greater equity. They have been providing loans to countries in development and transition since 1946, with