Live from Evolve: Previews and Updates in Xamarin Studio, Xamarin for Visual Studio, and Workbooks

We’ve just pushed some exciting releases into our updater channels including a Release Candidate in our beta channel Xamarin Studio and Xamarin for Visual Studio, and for Xamarin.iOS and Xamarin.Android.

At Microsoft //build 2016, we announced that Xamarin is now included in all editions of Visual Studio, including the free Community Edition, making mobile development accessible for all developers on Windows. Today, we released a new features in Xamarin for Visual Studio that provide a seamless experience for mobile development, so that you can stay in your favorite IDE and build for all platforms. Our iOS Simulator remoting enables you to interact with apps running in Apple’s iOS Simulator running on a Mac as though the simulator were running locally. Even multi-touch interactions are supported on Windows machines with touch capable screens, so you can interact with your app just as a user would by tapping, pinching, or swiping your touchscreen display—things that could previously only be tested on physical devices. The simulator also supports all the features you would expect such as device rotation, taking a screenshot, and even simulating location changes. For more information, visit our guide on iOS Simulator remoting.

Debugging on simulators is a great start, but there is really no substitute for testing on physical devices. Today, we previewed support for iOS USB remoting which makes it possible to deploy and debug apps from Visual Studio to an iOS device plugged into your Windows PC. Simply connect your device to a Windows 10 machine via USB, select the device to deploy to, and debug your app on an iOS device without ever having to leave Windows. iOS USB Remoting will be available as a preview soon, so be sure to stay tuned into releases.xamarin.com.

Xamarin Studio has steadily evolved into an incredible development environment for developers building native iOS, Android, and OS X applications in C# and F# on Mac. Over the past few months, we have been working on making the best IDE for cross-platform mobile application development on Mac even better and are proud to introduce the Xamarin Studio 6 Release Candidate.

Xamarin Studio has been redesigned and now sports an updated style with 5,727 new icons, a beautiful dark theme, and improved syntax highlighting scheme to make developing mobile apps on a Mac a pleasure. In addition to substantial visual improvements, Xamarin Studio’s type system has been been completely rewritten from the ground up to be based on Roslyn, Microsoft’s open source .NET compiler platform. Even though this is an internal change, it has a major impact on your productivity, with improved support for C# 6, more accurate code completion, expanded refactoring support, and a new formatting engine that is fully compatible with Visual Studio.

Xamarin Studio 6 RC has a completely revamped the service in charge of loading and building projects under the hood, including a much deeper integration with MSBuild. This means much greater compatibility for developers working in both Xamarin Studio and Visual Studio, so projects created with one IDE can easily be used in another. The new project model also brings parallel compilation for projects when possible to cut down on time wasted waiting for projects to compile and maximize developer productivity.

Developers may want to write shared logic in F# and consume it from mobile application. Xamarin Studio 6 includes full support for F# Portable Class Libraries (PCL) projects, including templating to help you get started. We are also proud to pioneer F# support for Shared Projects, becoming the first and only IDE to support this.

Developers who are building mobile apps for iOS, Android, and Windows will be delighted to hear that we have also added templating for building cross-platform mobile apps with Xamarin.Forms in F#, among numerous other enhancements to make F# a first-class mobile development language.

In addition to massive improvements to developer tooling, our Release Candidate also includes many updates to the Xamarin SDKs. Xamarin.Android includes a new Java invocation architecture that reduces the size of Android apps nearly 2MB (in API 23) compared to previous releases, and may improve app performance due to additional caching opportunities. Both Xamarin.iOS and Xamarin.Android introduce new native HTTP handlers, bringing speedier network operations to your mobile apps and allowing HttpClient to use any network and encryption protocols iOS and Android are familiar with, such as TLS 1.2.

Our new Workbooks are live documents that are great for experimenting, teaching, training, or exploring mobile development with C#. See an app come to life as you move step-by-step through an interactive coding workbook, such as our workbook to learn Android View animations. The code editing window provides code completion, syntax coloring, in-line live-diagnostics, rich text editing, and multi-line statement support. Workbooks support not only C#, but also provide deep integration with platform-specific APIs, so you can render colors, maps, and other mobile constructs directly from your workbook. 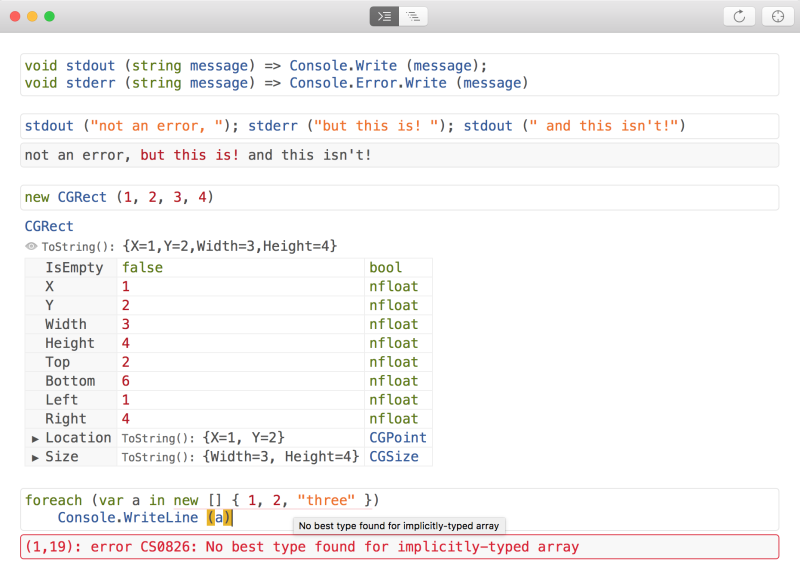 Live from Evolve: Faster and Easier Mobile App Development with Xamarin.Forms
Xamarin.Forms already allowed you to build cross-platform native UIs for iOS, Android, and Windows from a single shared C# codebase. Today, we demonstrated even more...