In prior versions of Visual Studio, before Visual Studio 2010, the projects could only target .NET Framework versions v2.0, v3.0 and v3.5 therefore it was, mostly, sufficient to identify a framework only with its version.

This is changing with Visual Studio 2010 – now projects will be able to target not only current versions of the .NET Framework, but they will also be able to target future versions of the .NET Framework and even target other framework-families like Silverlight. In other words Visual Studio 2010 supports true multi-targeting and truly extensible multi-targeting.

Now suddenly the version itself is not sufficient to describe a Target Framework; we need a new kind of moniker to describe/identify frameworks in the extensible multi-targeting world.

It generally takes the form:

Thus the Target Framework Moniker has at the most 3 components; the Identifier, Version and a Profile.

The Identifier and the Version are mandatory while the Profile is optional.

A slight but important digression to clear up a common source of confusion; there is often uncertainty and confusion around the version numbers of Visual Studio, .NET Framework and CLR and especially the latter two. There is also often confusion about their relationships.

The following table, hopefully, makes the above discussion clear:

A key take away from all the above – if you want to pick one – is that Visual Studio projects always, directly, target a framework-family (e.g. .NET Framework) version and not the underlying runtime (e.g. CLR) version.

The third and optional component of the Target Framework Moniker is the Profile.

Just to provide some visuals, here are some of the areas you may encounter the Target Framework Moniker:

While creating a new project: 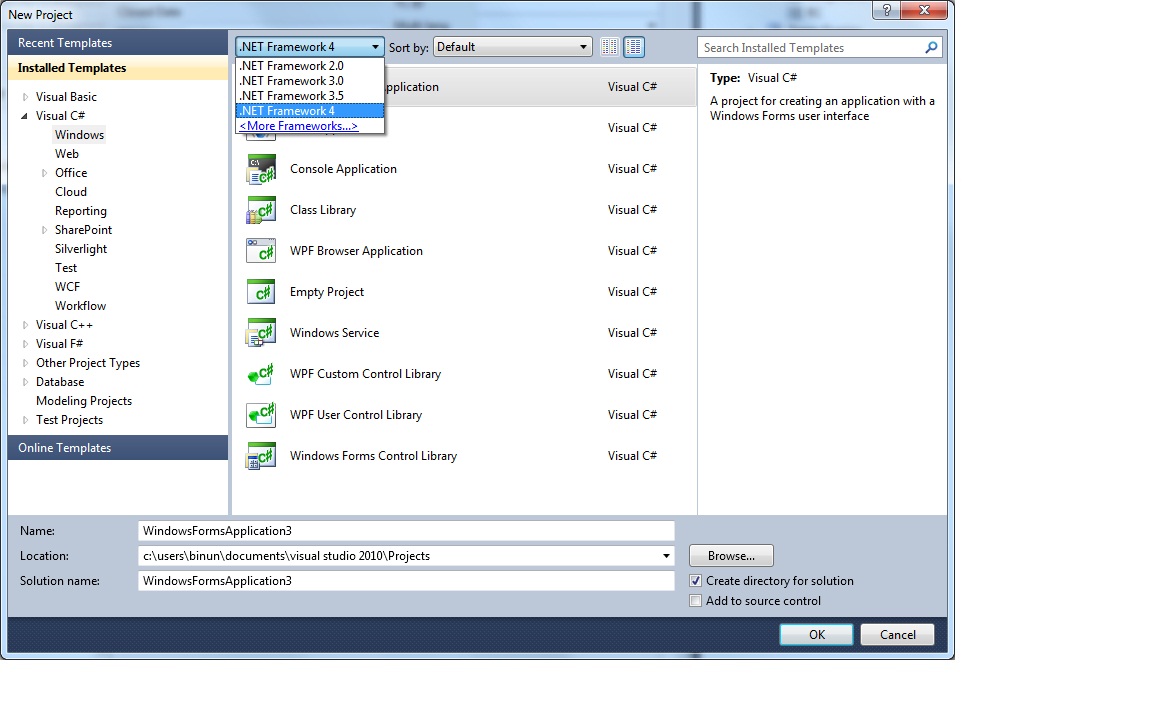 On the VB/C# project properties page: 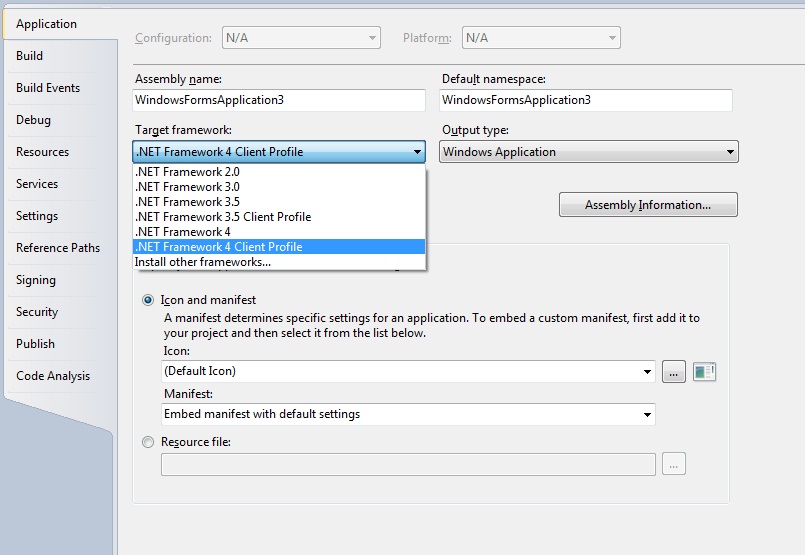 Target Frameworks are a design time concept. The corresponding runtime framework needs to be installed for the project’s output application/module to run.

Target Framework is used by Visual Studio (and other tools like Expression Blend) and build environments to provide a design time environment to the project so that the executable/module produced/built there-forth is guaranteed to run on the corresponding runtime framework on any machine.

It helps a developer by preventing them from using a Type from a framework, in their project, which is not a runtime prerequisite for their project output binary.

In general Target Framework refers to the Full/Base Framework e.g. .NETFramework,Version=v4.0. When targeted to the Full Framework the project can use the full surface area in that framework.

Some key Framework deployment scenarios may not require all the Types/surface-area in the Full Framework and therefore the framework provider may provide a Profile Framework instead e.g. .NETFramework,Version=v4.0,Profile=ServerCore. The Profile only exposes a subset of the surface area of the parent Full Framework e.g. .NETFramework,Version=v4.0; this subset may be a reduction in the number of assemblies, or in the number of Types in the assembly, or even a reduction in the members of a Type. Profile cannot add any new surface area – it is always a subset/reduction. Profiles are the preferred delivery mechanism for “parts of a Full Framework”. The Profile framework is available to be targeted by a project, independently, just like any other Full Framework.

Mark is a .NET developer. His development machine currently has Visual Studio 2010 and the .NET Framework v4.0. He develops web based inventory management software for a major distribution company. This software runs on a highly secured Windows Server 2008 machine and requires only .Net Framework v4.0 installed to run. In the course of using his development machine he finds he needs to install a new version of his company’s document management application which requires .NET Framework v4.1. The v4.1 framework included changes/additions to System.web. Now Mark’s Visual Studio project needs the v4.0 System.Web assembly (or only Type metadata from the said assembly) in order to make sure that additions in the v4.1 System.Web is not inadvertently included in his project. Without the v4.0 Target Framework Mark’s project/application may inadvertently use v4.1 types, which will cause the application to fail when deployed.

To re-iterate the crux of the user story above – without the concept of the Target Frameworks and separate Target Frameworks for v4.0 and v4.1, the above developer may have inadvertently used Types from the v4.1 assembly thus rendering their application incapable of running on a machine with only v4.0 installed which is their only runtime pre-requisite. Issues like this can only be caught via deployment testing late in the product cycle.

This Visual Studio Managed Multi-Targeting series pertains to managed project systems and aims to provide a detailed round-up of all relevant/related topics.

Please feel free to use the comment stream to ask questions.

Walkthrough– Publishing a Custom Web Control (Part 1 of 2)
The Visual Studio 2010 SDK adds several project templates to Visual Studio that let you create and share custom controls. These are called extensibility projects. In ...

Visual Studio Blog
May 25, 2010
0 comment
Excuse the Mess While We Move
You may have noticed that The Visual Studio Blog looks a bit different than it did last week.  Yesterday, the folks that run http://blogs.msdn.com completed the much-...