We want to keep you secure when using Visual Studio. If you’re using an older version of Visual Studio, we have several reminders about upcoming events in the Visual Studio support lifecycle.

First, if you’re using the Community Edition of Visual Studio 2017 or 2019, we recommend you upgrade to Visual Studio 2022 Community, our first 64-bit IDE which makes it easier to work with even bigger projects and more complex workloads. We’ve made several productivity improvements in this version. The stuff you do every day—like typing code and switching branches—feels more fluid and responsive. It provides built-in support for Git version control, manage your own repositories, and rich integration with GitHub. IntelliCode’s AI-powered code completions helps you code more accurately and confidently. And, tools for .NET MAUI help you develop cross-platform mobile and desktop apps.

Starting in November 2022, organizations that are configured to use Windows Update for Business (WUfB) and want to deploy Visual Studio security updates automatically can now target modern cloud connected devices that are joined via Azure Active Directory. This new functionality augments the current deployment capabilities where Administrator Updates can be delivered to devices that are domain joined and managed by SCCM. Visual Studio administrator updates are available for all supported versions of Visual Studio, and they can be used to easily update client machines to the latest secure version that’s available. Refer to the Visual Studio Administrator Guide for more details on how to take advantage of this and keep your organization secure.

Visual Studio includes independent components that have their own product lifecycle timeframe, which is often different than the Visual Studio product lifecycle. Once these components transition to out of support, they no longer receive additional security fixes.  We have recently added functionality that makes it easy to automatically remove independent components installed by Visual Studio that have transitioned to an out-of-support state. By using this new feature when you perform updates, you will be better able to keep your machine secure. Individuals can use this feature to manage their future installations by adjusting their Update Settings (see screenshots below). Administrators can make use of this feature for layout and network installs by using the command line or group policy. Details about how to use this functionality are described here. 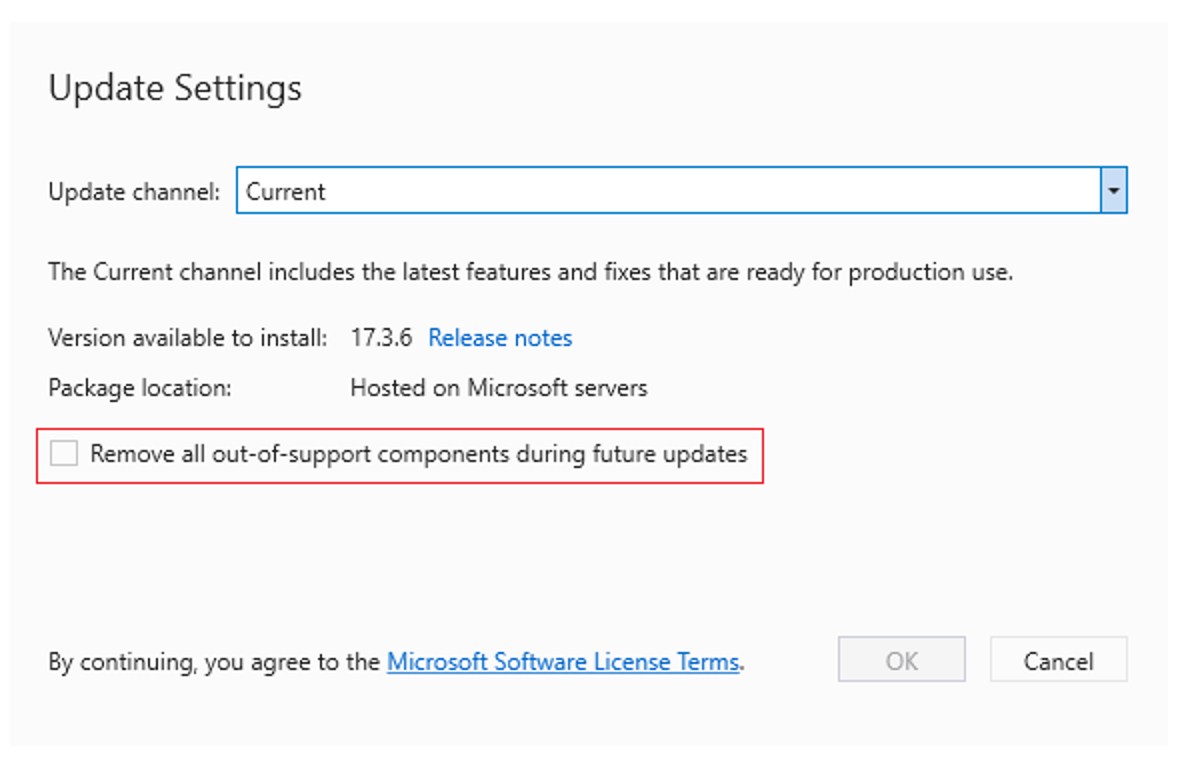 Visual Studio 2022 is our most productive IDE ever, and we recommend all our customers upgrade to it. With Visual Studio 2022 we offer three channels: Preview Channel so that you can provide early feedback on the latest features. The Current Channel provides these new features when they are ready for widespread use. Users should install each minor update of the Current Channel as it is released to stay in support. Finally, for the Enterprise and Professional users we offer Long-Term Servicing Channels (LTSCs) to give your development team more control over when you adopt new feature releases. We provide quality and security fixes for LTSCs for 18 months after release.

On January 10, 2023, support will end for all Visual Studio 2012 editions, associated products, runtimes, and components and they will no longer receive security updates. These include:

We recommend users upgrade to the latest version of Visual Studio to remain under support. For the end-of-support dates for all versions of Visual Studio, see the Microsoft Product Lifecycle Center. Upgrade today!

If you have any questions about the upgrade or migration process or about our support policy, just ask in the comments below!

Copy with proper indentation
You want to share some code you’ve written with a colleague, so you select it in the editor and hit Ctrl+C to copy it. As you paste it in Outlook/Slack/Teams, you ...

Mads Kristensen
October 25, 2022
20 comments
Learning Series: Get started with GitHub in Visual Studio
We’re introducing a new way to learn about Git, GitHub, and version control in Visual Studio – an email learning series with actionable challenges and a repository to...