In a previous blog post we introduced the private preview for port forwarding in Visual Studio, this support has now been renamed to “dev tunnels” and is now in public preview. The main difference between the private preview and the public preview is that you no longer need to sign-up, and be approved, to access dev tunnels. Getting started with dev tunnels is easy, follow the steps below.

After installing Visual Studio 17.4, you can enable the dev tunnels feature in Tools->Options->Environment-Preview Features, see the image below. You will also need to be signed into Visual Studio to use this feature. 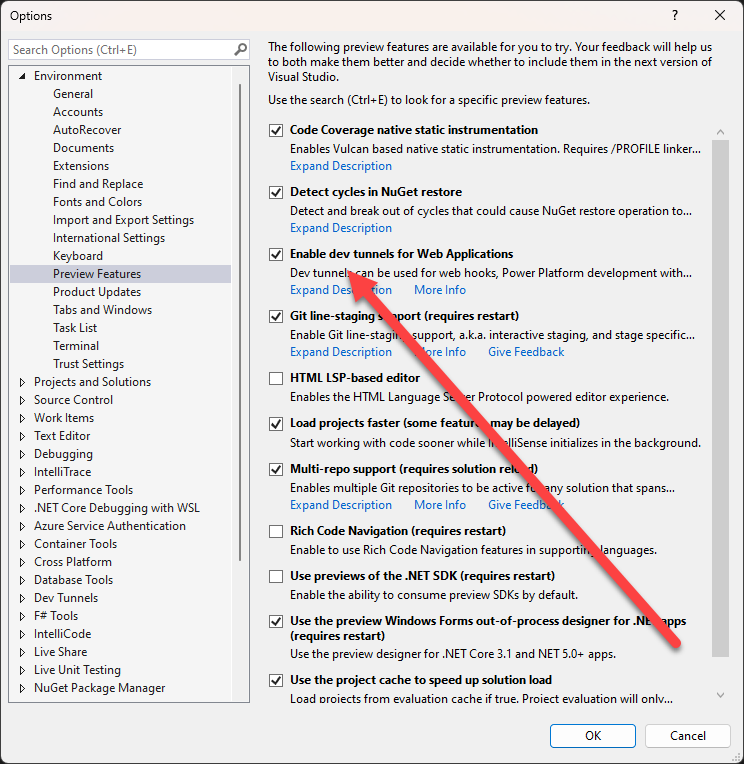 For example, below shows a launchSettings.json with a profile that has dev tunnels enabled.

After configuring dev tunnels in launchSettings.json, your project will start locally, and a public URL will be associated with your project. You can use this public URL to access the project outside of your local machine. Some scenarios where you may want to use a public URL include; developing web hooks, developing a Power Platform app that calls into an ASP.NET Core Web API, sharing your in-progress work and more. For the current implementation, each time you start Visual Studio, you will get a new URL, but we are exploring ways that we can maintain the same URL across restarts to Visual Studio. We will have more to share there in the future.

When you run a web project with a dev tunnel that has browser support, you should see a page like the following on the first request for each device. After clicking Continue, the request will be routed to the local web app. This page is not included for any API requests using dev tunnels.

Updates since the initial release

Since the initial release, we have added several features to the dev tunnels support. We will go through those updates here.

In the initial release, when you created a dev tunnel, the tunnel access was set to public by default. To improve security, we have changed the default to be private instead of public. As mentioned earlier you can configure this with devTunnelsAccess and changes will be applied the next time that the project is started in Visual Studio.

When this preview was initially released, we only supported Azure accounts, since then we have added support for Microsoft Account (MSA) as well as GitHub accounts. If you are signed into Visual Studio, you should have access to using dev tunnels. Org support for GitHub accounts is not currently supported, but is on the roadmap.

We have added an option in Tools->Options->Dev Tunnels to configure the user account that is used when creating, and using, dev tunnels. The account selected will be used for all tunnels that are created and used in Visual Studio. We do not have support for using multiple accounts easily at this time, but we are investigating some support for the future.

When a project is launched with a dev tunnel, you can see the status of the tunnel, and the URL, in the new dev tunnels Output Window pane. See the image below. This is especially useful for projects that do not open a browser by default. For example, when working with an Azure Function, this may be the only way to discover the public URL that is being used by the dev tunnel.

Since the initial release, we have heard from users that it’s important to be able to determine the public dev tunnel URL at runtime. To facilitate this, when you start a project that is using a dev tunnel, an environment variable named VS_TUNNEL_URL is populated. You can inspect this environment variable to get the root URL for the dev tunnel.

VS_TUNNEL_URL exposes the URL to the tunnel used by that project. It’s also possible to get the URL for other projects. To do so, you’ll need to configure multiple startup projects in Visual Studio. For more info, see How to: Set multiple startup projects. Projects will get an environment variable for each project using a tunnel that is started before it. For example, let’s say that you have two web projects in a solution. In MyWebApp, I’ve added the following lines of code to the Program.cs file.

When the web app is started the following appears in the console output. Here you can see that we were able to get the URL for the MyWebApp project, as well as the MyWebApi project.

Now that we have covered the current support, let’s take some time to discuss what the team will be working on going forward. The current model for dev tunnels support requires users to write values into the launchSettings.json file. We have run into a number of issues with this model and we will be removing that in a future release. Instead we will build some UI into Visual Studio which will enable you to create and manage tunnels more explicitly. Along with this we are hoping to enable the following features.

If you would like more info on the new design, please leave a comment here and we will consider adding a blog post with more details on our plans.

What to do if you run into issues?

This is an early preview, so you may run into some issues when using this feature. The best method to report issues is using the built in Report a Problem support in Visual Studio. You can also leave a comment here or reach out to Sayed on Twitter at @SayedIHashimi.