Visual Studio IDE is a feature-rich program that supports many aspects of software development. Our customers can use VS to edit, debug, and build code, and then publish an app. The IDE also provides frequent updates to add additional features, make reliability improvements, and address security vulnerabilities, and we encourage customers to adopt these updates as quickly as possible.  We strive to ensure that updates are highly compatible, but even so, sometimes our customers want the ability to restore Visual Studio to its previous state.  To address this highly requested feature, Visual Studio is introducing the Rollback feature – the ability to return to your previously installed version of Visual Studio.

Rolling back will return Visual Studio to the version installed prior to the last applied update, but it will keep any modifications to selected components chosen since that last update. Your common synchronized settings such as themes, fonts, key bindings, and windows layout will be restored. Local customizations such as your user settings and profiles will be removed.

What will happen to my security updates?

Security updates that are included in a release greater than the version you rolled back to will be removed which could make your device vulnerable. We recommend always updating back soon to the latest version to stay secure.

With Visual Studio 2022 17.4, you’ll be able to rollback to your previously installed version.

Components that are compatible

Can I rollback if I am in a managed environment?

Due to your organizational policies and the requirement to be on the most secure version, your rollback attempt might be undone. IT administrators can control this update behavior by using a policy that disables the ability to Rollback. Please refer to Configure policies for enterprise deployments for more information.

How can I rollback?

There are two options to use this feature:

You should be seeing “Rollback to previous version” from the More dropdown button on a product card after an update. 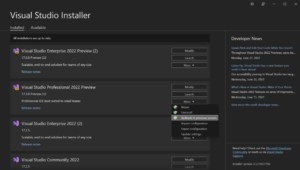 From there, a warning pop up will appear and you will have the option to either cancel or proceed. 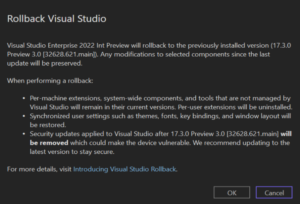 You can rollback the update programmatically by using the installer on the client machine and passing in the rollback command alongside the installation path instance. For more information, please visit Use command-line parameters to install Visual Studio | Microsoft Learn.

Let us know your thoughts!

We would love to get your feedback on the rollback feature, so please give it a try and let us know what you think. You can share any feedback via Developer Community to help us make Visual Studio better for you!

Multi-repository Support Released!
As one of our most highly request features with Developer Community, we are so happy to announce the release of multi-repository support in Visual Studio 2022. Support ...

Jessie Houghton
November 14, 2022
9 comments
Public preview of dev tunnels in Visual Studio for ASP.NET Core projects
In a previous blog post we introduced the private preview for port forwarding in Visual Studio, this support has now been renamed to “dev tunnels” and is now in ...