Most Visual Studio extension authors publish their extensions to the public Marketplace to allow everyone to install them and benefit from the large and open ecosystem. However, some companies create extensions for internal use only. A private gallery allows them to distribute the extensions easily with the same auto-update capabilities enjoyed by any public Marketplace extension. And now, we’ve streamlined the process even more so that you can easily create a private gallery for your team or organization.

Visual Studio 2010 introduced support for private galleries, but few used them due to lacking samples and tooling. A lot has changed since then and the private gallery support has seen several updates to support extension packs and other more recent features.

The anatomy of a private gallery

A private gallery is an ATOM feed XML File that contains meta data about the extensions. Registering the gallery with Visual Studio can be done either by the user manually under Tools -> Options or by an extension using a custom .pkgdef file (example). 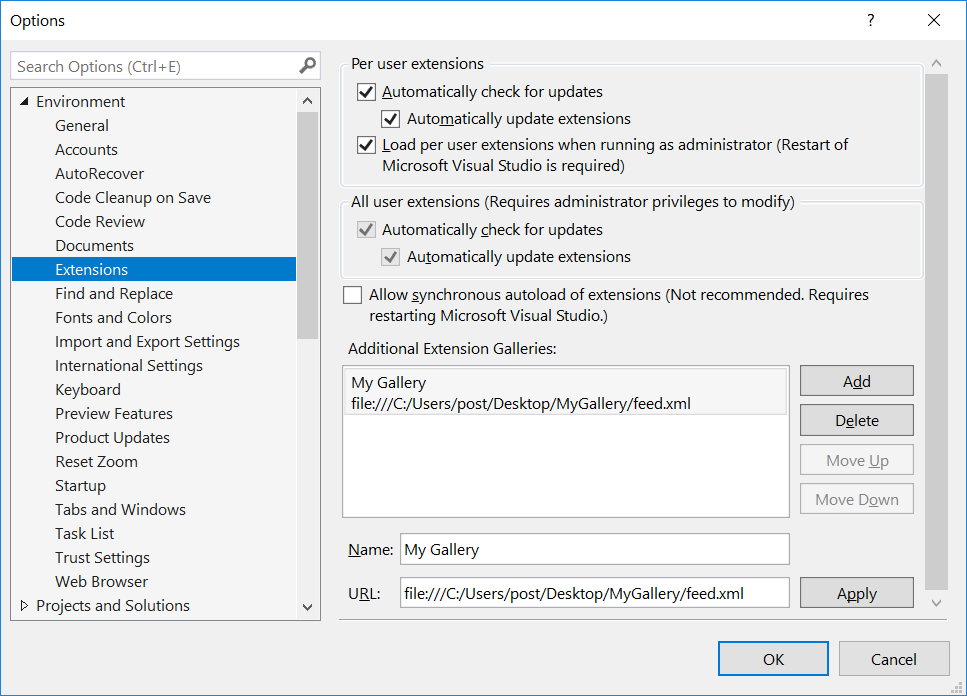 The ATOM feed can be located on a web server, file system or file share. After registering the gallery, a new category appears under the Online tab in the Extension Manager dialog as shown in the first screenshot above.

The open source tool Private Gallery Creator makes it straightforward to create the ATOM feed. Download the executable and run it in a folder containing the VSIX files you wish to include in the feed. The tool analyzes the VSIX files and extracts the metadata needed to produce a file called feed.xml in the same folder.

You could also set up a CI/CD pipeline that automatically executes the tool to update the feed. In addition, the tool has a “watch” feature to automatically produce a new feed any time a VSIX file is added or modified in the same folder.

Set it up in only four steps

Here’s a recap of how to set up a private gallery:

You can learn more about private galleries from the documentation and by checking the Private Gallery Creator project on GitHub. There are a few public offerings for hosted private galleries such as MyGet and Open VSIX Gallery that may be worth looking into as well.

We’d love to hear about how you use private galleries today or why you don’t use them, so please sound off in the comments below.

Visual Studio 2019 version 16.2 Preview 2
Check out what's new in the new Preview 2 release of Visual Studio 2019 16.2. Find out how to debug your ASP.NET (Core) web apps in the new Microsoft Edge Insider build, how to be more productive when you work with code in the IDE and how we make sure your Visual Studio installation makes the best out of your disk space