It’s the beginning of a new year! According to Back to the Future Part II, everyone will be riding hoverboards in a couple months (and, let’s be honest, Doc would love the HoloLens). In the meantime, let’s explore the enhancements we’ve made to the Visual Studio debugging experience. In CTP 6, we improved the edits supported by Edit & Continue and now support Make Object ID in the new 2015 VB and C# expression evaluators.

Edit & Continue is reaching its potential.

*The following types of edits are not supported:

Object IDs are a hidden gem and we’ve modified the syntax.

Did you know you can tag an object in the debugger and refer to it later using Make Object ID (even when the object is out of scope)? Did you know you could compare references of objects and verify that they refer to the same object with an Object ID tag? While Object IDs have been around for several years, few know and take advantage of this feature.

An Object ID is a unique identifier for an object that you can get from the debugger to keep track of an object in memory throughout you debugging session across different scopes, stack frames, and threads. You can also use the Object ID when debugging to compare references of objects and be absolutely certain they refer to the same object.

Below, I am stopped at a breakpoint on line 13. I have created a Watch for Circle a and made an Object ID for it ($1). Now if I step into the initialization of Circle b, putting Circle a out of scope, I can still inspect the value of Circle a via its Object ID: 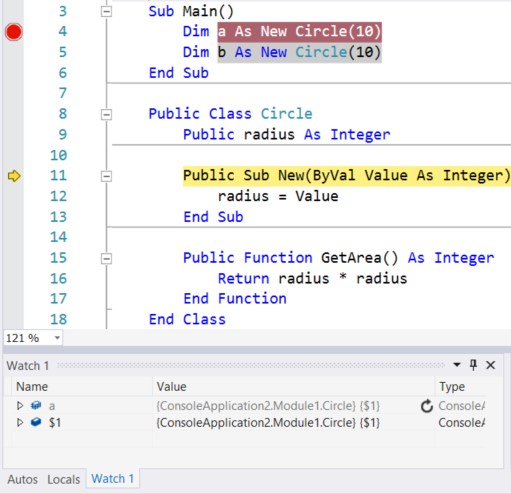 Try out all these new features in Visual Studio 2015 CTP 6. Let us know what you think using Visual Studio’s Send a Smile feature! And don’t forget to log issues on our GitHub.

How "Roslyn" Finally Unshackled Visual Basic From The Tyranny of the Pretty-Lister
UPDATE 2015-04-02: After reading this post be sure to read the follow-up post! I was chatting with an old Microsoftie a while ago and he let me in on the real story ...

Anthony D. Green [MSFT]
April 1, 2015
0 comment
Lowercase Keywords Revisited (not an April Fools' Day joke this time, I promise)
Hey all, I hope you enjoyed yesterday's April Fools' Day post. I thought it was a fun way to kick off an experiment I'd like to conduct and in this post I'll tell you how...