Summary: Use Windows PowerShell to manage your Office 365 environment.

Microsoft Scripting Guy, Ed Wilson, is here. Today we have as our guest blogger, Alan Byrne. 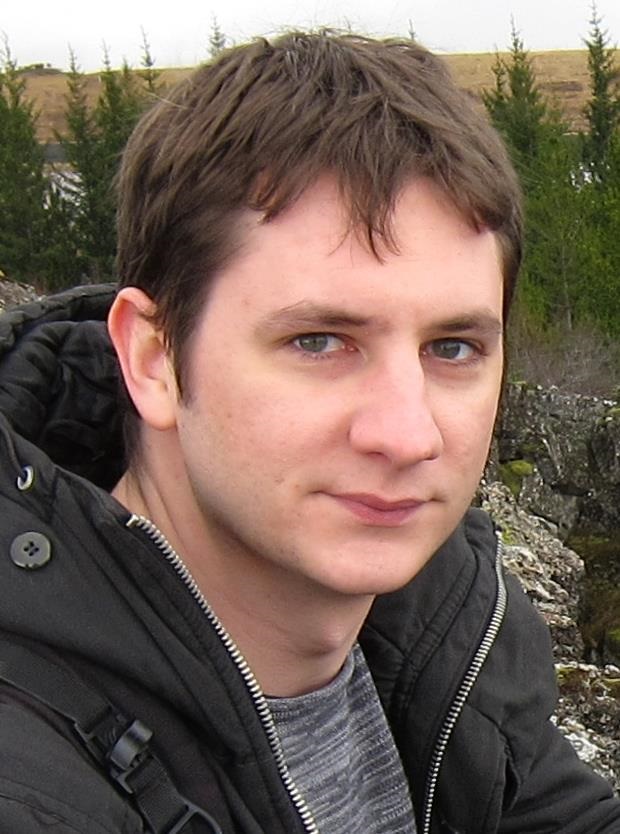 Alan is the cofounder of Cogmotive Reports, an Office 365 Reporting and Analytics web application that offers a range of automated Office 365 reports on mailbox sizes, user log-in times, mobile devices, license usage, and several other Office 365 metrics. He has an extensive background in design and administration for Windows and Exchange Server, and he tries to script every administration task he comes across. More recently, Alan has been applying these skills to Microsoft Office 365.

As more companies move to Microsoft Office 365, IT managers need to find a way to reconcile their cloud-based licenses with their actual user numbers. No one wants to pay for licenses that they aren’t using!

If you log in to the Microsoft Office 365 portal, you can see how many licenses you’ve purchased and how many are in use. Unfortunately, there is no way to easily tell which license has been assigned to which user account. 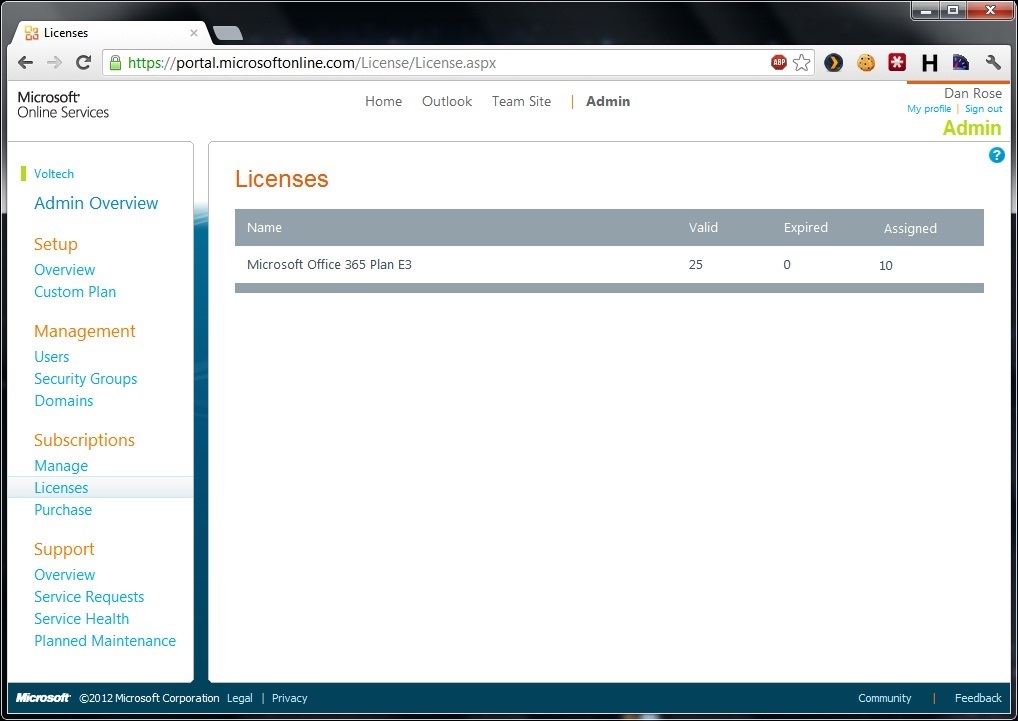 To get a detailed license usage report we need to do some fancy Office 365 Windows PowerShell scripting, which I’ll explain here today.

Before we do that, we need to understand how licenses work in Office 365. An Office 365 tenant can hold many different license types; each license type is called a subscription. This allows administrators to assign a feature set to one group of users that is different than those of another group. On the Microsoft Office 365 Plans and Pricing page, you can find an explanation of what you can access with each subscription.

Within each subscription there are a set of services that you can turn on or off for each user. 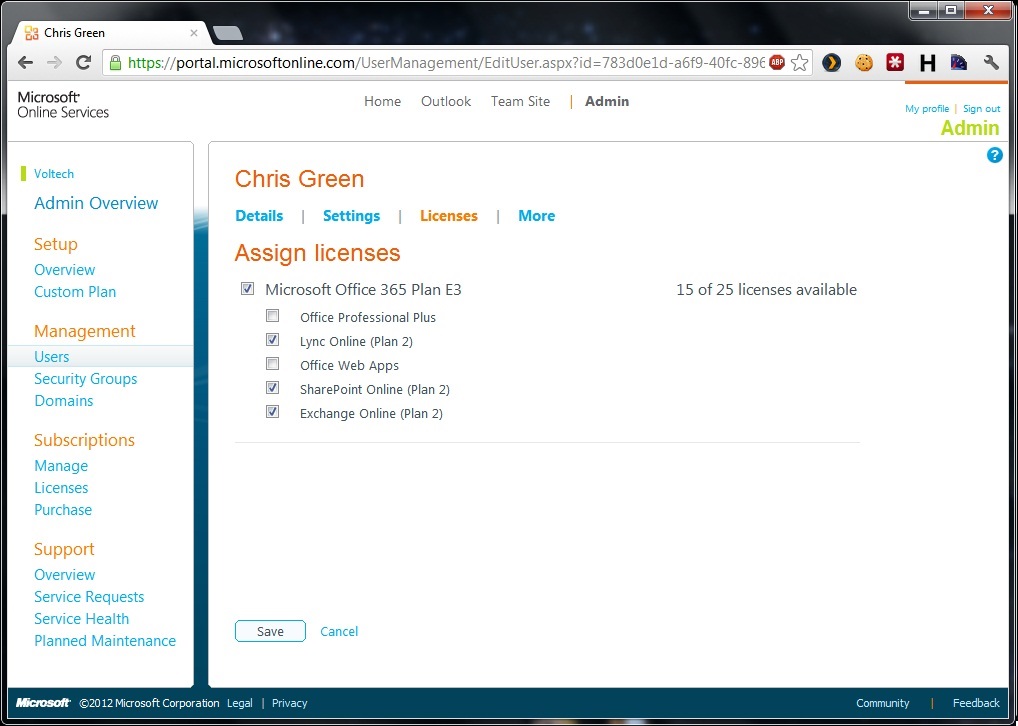 So if you have a lot of users, how can you tell which features are enabled for each person? Well, you can click each user one-by-one and note it—or you can script it.

Microsoft allows you to administer Office 365 remotely by using Windows PowerShell. The script that I am presenting today uses this functionality to generate a CSV file that you can import into Microsoft Excel to view and filter your license types.

For this script to work, you need to install the Microsoft Online Services Module for Office 365. This allows your local Windows PowerShell to utilize the Microsoft Office 365-specific cmdlets.

To download this module, click the link that matches your operating system version (32-bit or 64-bit): Install the Windows Azure AD Module.

The script begins by defining a look-up table that turns the Microsoft Subscription SKUs into something that we mere mortals can understand. We use this hash table when building the CSV file later in the script.

"STANDARDWOFFPACKPACK_STUDENT" = "Office 365 (Plan A2) for Students"

"ENTERPRISEWITHSCAL_STUDENT" = "Office 365 (Plan A4) for Students"

"STANDARDWOFFPACKPACK_FACULTY" = "Office 365 (Plan A2) for Faculty"

"ENTERPRISEWITHSCAL_FACULTY" = "Office 365 (Plan A4) for Faculty"

We also set the name and path of the file we will use for our License Usage Report CSV file. You can change this part if you want the file to be named or saved differently.

Now it’s time to import the Office 365 Windows PowerShell cmdlets and prompt you for your Office 365 user name and password. You should enter the details for an Administrator account for your tenant, which the script will then use to connect to Office 365.

Before we get started on the users, we write a header line into the CSV file, which explains what each column means. This header will vary depending on which subscriptions you have attached to your tenant. Each subscription gets a new header in the output file. We use a switch statement with the wildcard parameter to make sure that we’re displaying the correct product. This is one of the most powerful switch statements I’ve come across in any scripting language.

# Build and write the header for the CSV file

We’re now ready to start collecting the user data. We use the Get-MSOLUser cmdlet to return a collection of user objects of all the licensed users within the subscription we’re currently processing.

With the $users variable now full of users, we loop through each one of them and write their details to the CSV report. This is where we use the hash table we created earlier to write the licenses in English.

# Loop through all users and write them to the CSV file

To use the script for yourself: 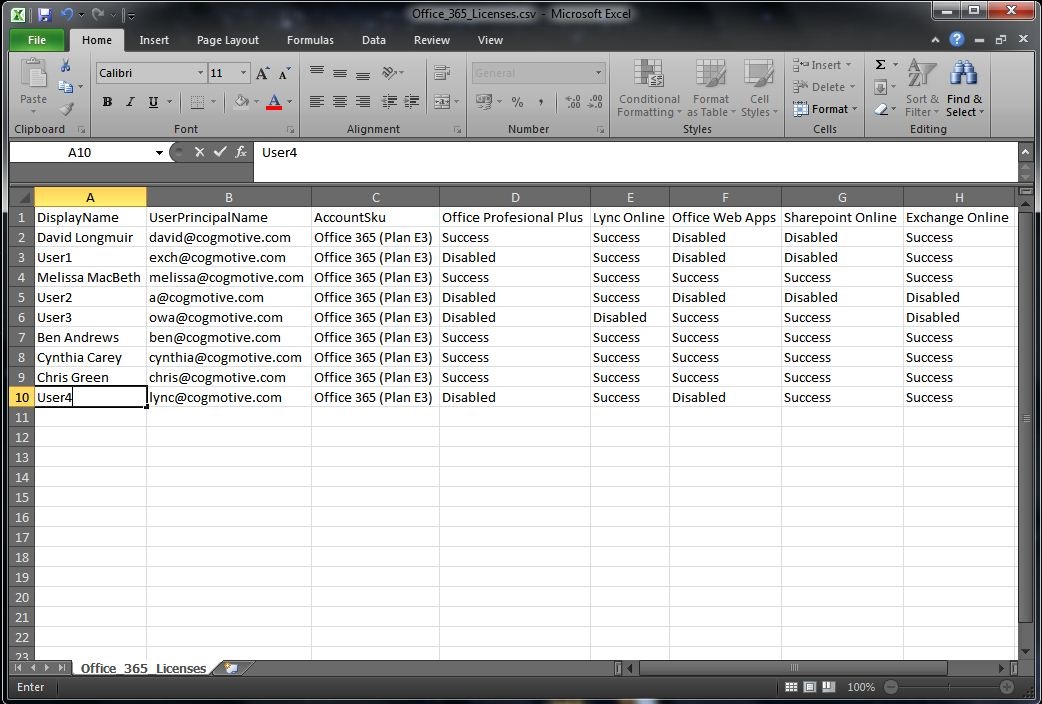 Armed with this license report, you could potentially save your company money by identifying incorrectly assigned licenses, such as users who have left the organization or accidentally licensed shared mailboxes.

The full script is available to view and download in the Script Center Repository.

Thank you Alan, this is great information.

Doctor Scripto
September 2, 2012
0 comment
﻿Use PowerShell to Create a User in Active Directory
Summary: Use the Active Directory cmdlet New-ADUser to create a new user via Windows PowerShell. Microsoft Scripting Guy, Ed Wilson, is here. The Scripting Wife has the ...