Hey, Scripting Guy! I have this server in a remote office that is running SharePoint. I do not know what version, but I am not certain that is a problem because it used to work. The problem is the workers in this remote office use this SharePoint server every day—they update copies of an Excel spreadsheet that tracks their daily business activity. Anyway, the server is sort of old, and routinely runs with nearly 100 percent of the memory utilized, and 90 percent of the CPU utilized. Today, I got a call from the office manager saying that they cannot access SharePoint. I tried to make a remote desktop protocol (RDP) connection to troubleshoot the machine, but to be honest, with the limited bandwidth and hardware constraints on the machine, RDP creeps me out, and I want to give up in frustration. What I think I need to do is check the status of the services to see what is started, what is not, and if there are any error codes.

Microsoft Scripting Guy, Ed Wilson, is here. Well today, the weather is balmy … at least I think it is balmy, though not sure exactly what balmy is, so it may not actually be balmy. What the weather does do is remind me of when I was growing up in Florida. The weather outside is 60 degrees Fahrenheit with a humidity of nearly 80 percent. It is not raining, but after spending a bit of time outside, it feels like it will rain. The Magnolia tree in my front yard even has a couple of bloom buds on it, but whether those will turn into flowers or not remains to be seen. So why am I talking retro here? Well DD, it is because to check what you need to check will require you to take a retro-type of approach.

DD, you stated that you want to see the StartMode, StartName, and the ExitCode of the services. You also say you want to see what is started and what is not. You can easily get what is started and what is not from the Get-Service cmdlet—in fact, the Get-Service cmdlet takes a ComputerName parameter, and therefore, it might work, depending on the firewall configuration.

By using the Windows PowerShell 3.0 Get-CimInstance cmdlet, the following command returns the service state (what is started and what is not) on a remote computer.

The command and its output associated are shown here. 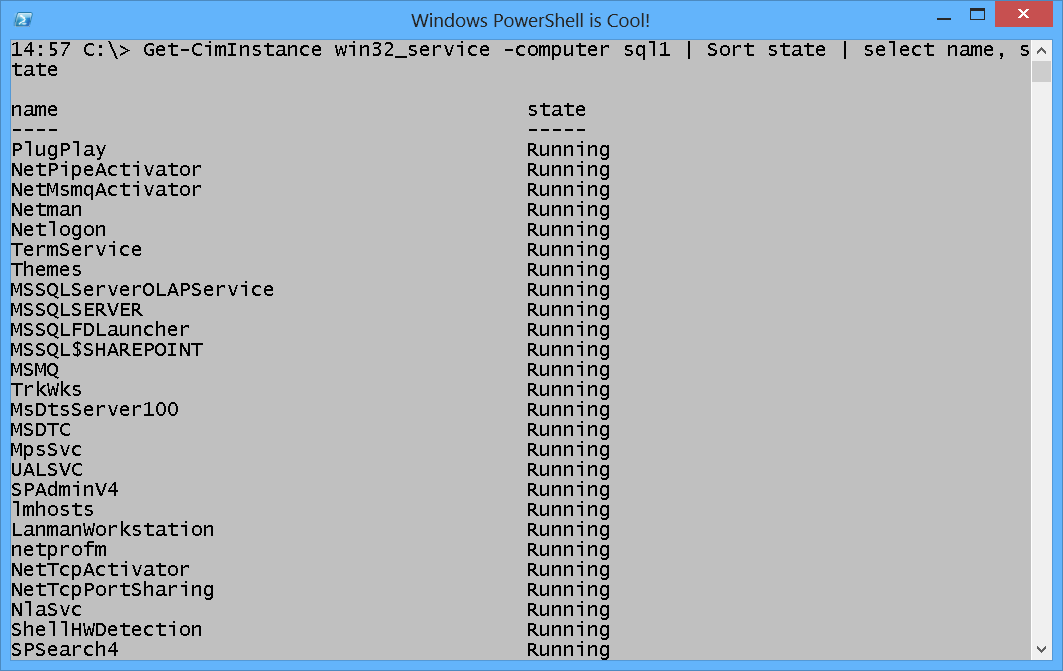 By using the Windows PowerShell 2.0 cmdlets, the only change required is to change from using the Get-CimInstance cmdlet to using the Get-WmiObject. This command is shown here.

Next, I select the name of the service, the startup account used by the service, and the exit code. The command using the Get-Ciminstance cmdlet (along with output associated with the command is shown here.

On Windows PowerShell 2.0, the command is the one showing here.

If a service has an exitcode value of 0, then it means that no error generated when the service exited. For some services, they start, and then stop, and then do not start back up again until they are needed (not all the time, mind you, just some of the time). If I want to hone in on services that do not have an exit code of 0, then I add one more bit of code to my filter. The revised filter is shown here.

The complete command is shown here (note, this is a one-line command that is wrapped to display on the blog).

Using the Windows PowerShell 2.0 cmdlets, the command is shown here.

Both commands and their output are shown here.