There have been several significant improvements to the test experience that range across Visual Studio and Visual Studio Team Services. These efforts involved frameworks and tooling for both .NET and C++, but all had a common goal: make testing with our developer tools a great experience.

Wow! How did you get that performance?!

The performance improvements are thanks to work in a few different areas, namely, Test Platform and Test Adapter improvements and a new feature called Real Time Test Discovery.

In the table below, you can see the before and after times of the most popular test frameworks and the percentage improvement per test runner. These were timed using benchmark solutions of 10,000 tests. You can find the links to the solutions in the table.

Before = VS 15.2 After = VS 15.5 Preview 2 + NUnit Adapter v3.9.0, published on 11 Oct 2017 + xUnit v2.3.1 published on 27 Oct 2017 Test Discovery performance improvements include the gains due to the new Source Information Provider implementation. This is presently shipped behind a feature flag. The intent is to make that the default from 15.5 Preview 4.

Much of this was a collaborative effort of developers contributing to the open source test frameworks NUnit, xUnit, and MSTest. Often working on the other side of the world from each other. Luckily, we can share the good vibes on social media.

Real time test discovery is a new Visual Studio feature that uses a Roslyn analyzer to discover tests and populate the test explorer in real time without requiring you to build your project. This feature has been introduced in Visual Studio 2017 15.5 Preview 2 behind a feature flag. Learn how to turn it on in the Real Time Test Discovery blog post. This not only makes test discovery significantly faster, it also keeps the test explorer in sync with code changes such as adding or removing tests. Since real time discovery is powered by the Roslyn compiler, it is only available for C# and Visual Basic projects.

We have also introduced a few usability enhancements including test icons appearing next to test method heads in the code editor when Live Unit Test icons are on. This addition was requested to help the test method head stand out from the other glyphs in the margin. Clicking on Live Unit Testing icons now pops out a menu where you can run or debug that test. 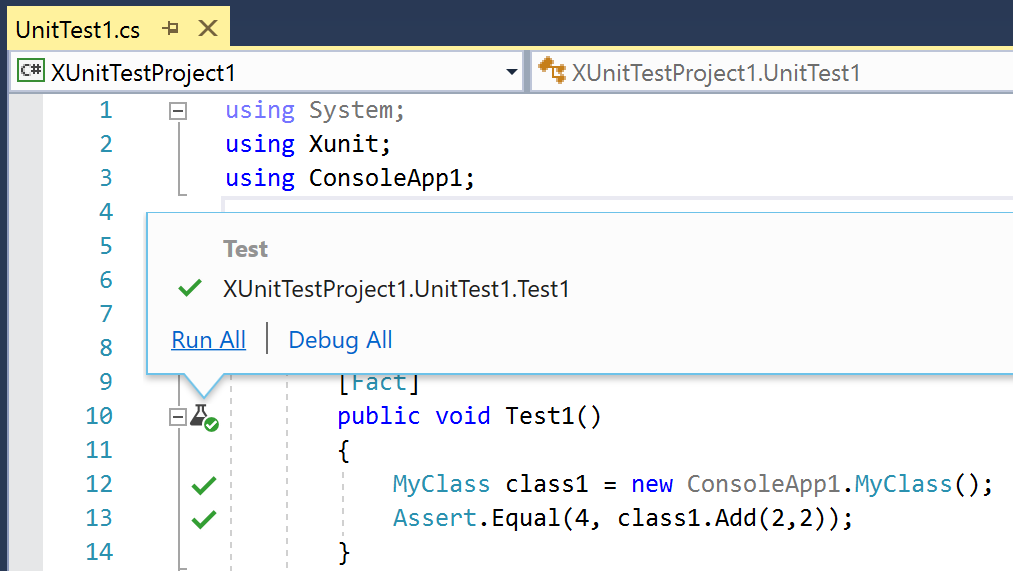 Whether you prefer the Microsoft, Google Test, or Boost.Test framework, you can immediately use all of Visual Studio’s testing tools to write, discover, and run your unit tests. In the next image, we see all the tests from the three frameworks were discovered and run via the Test Explorer Window.

To quickly add a Microsoft Native Test or Google Test project to your Solution, just choose the desired template in the New Project Wizard.

As always, we welcome your thoughts and concerns. Please Install Visual Studio 2017 today, exercise your favorite workloads, and tell us what you think.

For issues, let us know via the Report a Problem tool in Visual Studio. You’ll be able to track your issues in the Visual Studio Developer Community where you can ask questions and find answers. You can also engage with us and other Visual Studio developers through our new Gitter community (requires GitHub account).

Managing Secrets Securely in the Cloud
You’ve probably heard some version of the story about a developer who mistakenly checked in his AWS S3 key to Github. He pulled the key within 5 minutes but still ...

ScriptingGuy1 November 17, 2017
0 comment
Large C# and VB solutions load significantly faster in 15.5 update
On average, 50 percent of all solutions opened by Visual Studio users open in ten seconds or less. However, large solutions can take longer to load because there are a ...