Microsoft Scripting Guy, Ed Wilson, is here. One of the great things about getting a bunch of Windows PowerShell people together is that they begin to share tips and tricks they have figured out. One reason for this is that Windows PowerShell is highly discoverable. Another reason is that there is a whole lot of Windows PowerShell, and therefore, there is a whole bunch of stuff to discover. Many times (at least for me), the coolest tips and tricks are not something that I have never heard of, but they are new ways of doing things that I am already doing.

An example is the trick for today—using the Out-GridView cmdlet to pick commands from Windows PowerShell history to create an initial script. For me, what is cool about this, is that I already do both elements of the trick. That is, I already pick the command lines from history and I pipeline them to create a script.

I also already use the Out-GridView cmdlet’s –Passthru parameter so that I can cherry pick stuff from the displayed grid and return it to the Windows PowerShell console for further processing. But I never thought about putting the two techniques together. Obviously, Lee Holmes had thought of it, and he shared it with the Windows PowerShell User Group in Charlotte.

I pipe the returned command lines to the Out-GridView cmdlet, and I specify the –PassThru parameter. This means that Windows PowerShell displays the output in a grid. I can then select the items I want from that grid. The GridView control is shown here: The selected items return to the Windows PowerShell console. (I will pick them up, and then pass and redirect them to my temp file). The command now looks like the following:

I now write my selected commands to the temp file. I do this by using the redirection operator. Here is the command as it now stands:

Here are my two complete commands:

Because the output is not a PS1 type of file, I cannot simply press F-8 and run the script. But I can select the commands in the script pane, and press F-5 to run the selection. I can also use my Copy-ScriptToNewTab function (from my Windows PowerShell ISE module) and THAT will run directly. 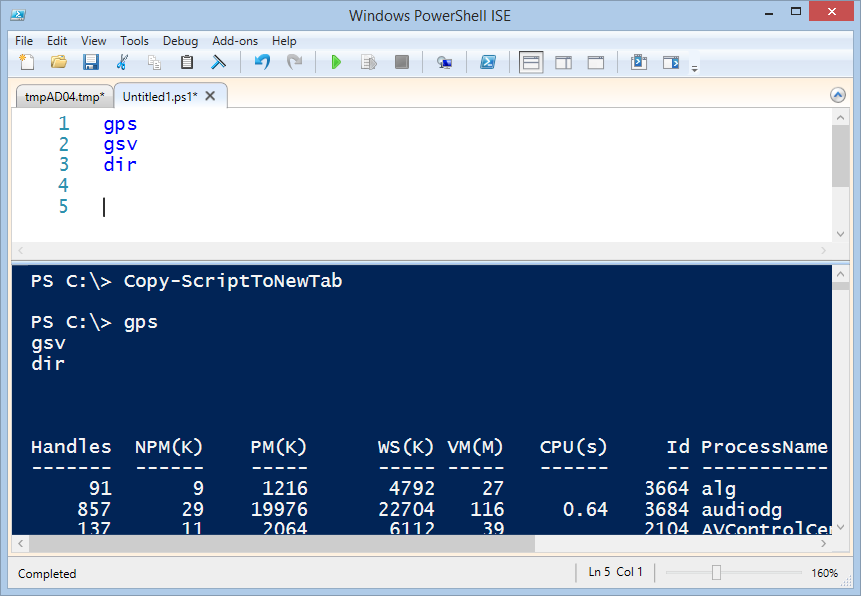 That is all there is to using Out-GridView to select commands via Windows PowerShell history. Tricks and Tips Week will continue tomorrow when I will talk about more way cool stuff.

Doctor Scripto
April 30, 2015
0 comment
It’s Not Too Late to Learn PowerShell
Summary: Ed Wilson talks about learning Windows PowerShell. It seems that there are always new technologies. It is hard to keep up with them, and it is hard to predict ...