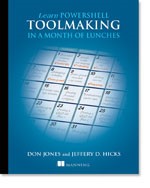 More than likely, your toolmaking projects will be on the complex side, and if you don’t understand scope, you may end up with a bad tool. Scope is a system of containerization. In some senses, it’s designed to help keep things in Windows PowerShell from conflicting with one another. In this blog, which is based on Chapter 5 of Learn PowerShell Toolmaking in a Month of Lunches, you get to see scope in action

If you ran a script that defined a variable named $x, you’d be pretty upset if some other script also used $x and somehow messed up your script. Scope is a way of building walls between and around different scripts and functions, so that each one has its own little sandbox to play in without fear of messing up something else.

There are several elements within Windows PowerShell that are affected by scope:

The shell itself is the top-level, or global, scope. That means that every new Windows PowerShell window you open is an entirely new, standalone, global scope—with no connection to any other global scope. The ISE lets you have multiple global scopes within the same window, which can be a bit confusing. In the ISE, when you click the New PowerShell tab on the File menu, you’re creating a new Windows PowerShell runspace—which is equivalent to opening a new console window. Each of those tabs within the ISE is its own global scope. The following image shows what that looks like in the ISE. Note that it’s the top, rectangular tabs that represent separate global scopes. The rounded tabs that hold script files live within that runspace, or global scope.

Each script that you run creates its own script scope. If a script calls a script, the second script gets its own script scope. Functions have their own scope, and a function that contains a function gets its own scope. As you can imagine, this can result in a pretty deep hierarchy, which the following image illustrates with a few global scope examples. There’s even terminology for the scopes’ relationships: a scope’s containing scope is called its parent; any scopes contained within a scope are its children. So the global scope is only a parent (because it’s the top-level scope), and it contains children. 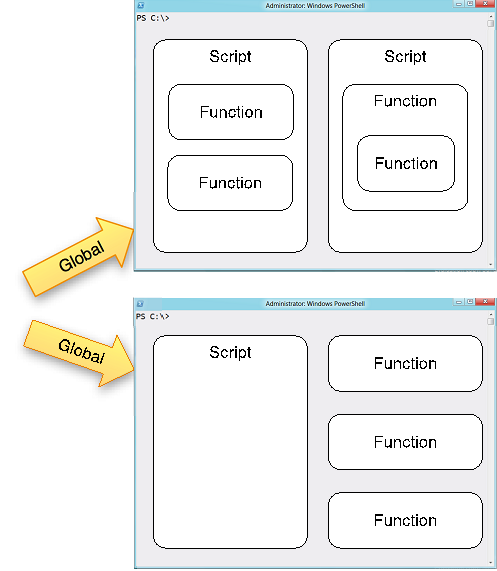 So here’s the deal: If you create a variable within a script, that variable belongs to that script’s scope. Everything inside that same scope can “see” that variable and its contents. The scope’s parent can’t see the variable.

Any child scopes, however, have an interesting behavior. Imagine a script named C:\Tools.ps1, in which we create a variable named $computer. Within that script, we have a function named Get-OSInfo. (Sound familiar?) If Get-OSInfo attempts to access the contents of $computer, the operation will work.

But if Get-OSInfo attempts to change the contents of $computer, it will create a new variable, also named $computer, within its own scope. From then on, the function will be accessing its private version of $computer, which will be independent of the $computer in the script scope. This, as you imagine, can be crazy confusing, so let’s see it in action to clarify. The following listing is a script that will help demonstrate scope.

Write-Host “In the function; var is now ‘$var'”

Let’s run that and check out the results:

In the script; var is ‘hello!’

In the function; var contains ‘hello!’

In the function; var is now ‘goodbye!’

In the script; var is now ‘hello!’

Please, definitely run this script on your own—we want you to see the results for real, right in front of your eyes. It’ll make it all clearer.

You have seen that scope creates walls between scripts and functions so that each one has space to play—messing up something else. The elements within Windows PowerShell that are affected by scope are variables, functions, aliases, PSDrives, and PSSnapins. We demonstrated that if you create a variable within a script, that variable belongs to that script’s scope. Everything inside that same scope can see that variable and its contents, but the scope’s parent can’t see the variable.

Here is the code for the discount offer today at www.manning.com: scriptw7
Valid for 50% off Learn PowerShell Toolmaking in a Month of Lunches and SharePoint 2010 Owner’s Manual
Offer valid from April 7, 2013 12:01 AM until April 8, midnight (EST)

Do One Thing and Do It Well
Summary: Microsoft PowerShell MVPs, Don Jones and Jeffery Hicks, talk about a fundamental tool design consideration. Microsoft Scripting Guy, Ed Wilson, is here. This ...