Microsoft Scripting Guy, Ed Wilson, is here. It can be somewhat painful to troubleshoot intermittent errors with Windows PowerShell. Two things that can lead to this are variables that do not get initialized properly (and therefore their values change over subsequent running of the script) and functions that do not get accessed properly. To solve both of these problems, we can use Windows PowerShell cmdlets.

Windows PowerShell treats scripts as functions. The next function that is called is the Add-RegistryValue function. The trace also states where the function is defined by indicating the path to the file. This is shown here:

The ! SET keyword is used to preface variable assignments. The first variable that is assigned is the $scriptRoot variable:

When the CreateRegistryKey.ps1 script is run with trace level 2, the detailed tracing shown here is displayed: 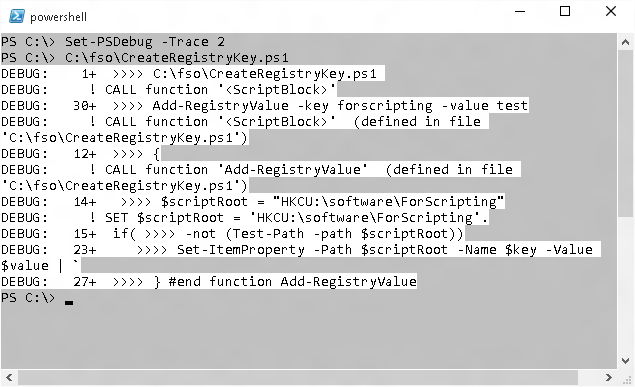 One easily correctable problem that can cause debugging nightmares in a script involves variables. Variables are often used incorrectly, are nonexistent, or are initialized improperly. An easy mistake to make when using variables is a simple typing error. Simple typing errors can also cause problems when they are contained in a large complex script.

Enabling strict mode causes Windows PowerShell to display an error if a variable is not declared. This helps you avoid the problem of nonexistent or improperly initialized variables.

An example of a simple typing error in a script is shown in the SimpleTypingError.ps1 script:

When the SimpleTypingError.ps1 script is run, the following output is shown:

As you can see, the value of the $c variable is not displayed. If you use the -Strict parameter from the Set-PSDebug cmdlet, an error is generated. The error tells you that the value of $c has not been set:

The variable '$c' cannot be retrieved because it has not been set.

It is possible to include the Set-PSDebug -Strict command in your scripts to provide a quick check for uninitialized variables while you are actually writing the script. You can therefore avoid the error completely.

When the SimpleTypingErrorNotReported.ps1 script is run, the following is displayed:

To disable strict mode, you use the Set-PSDebug -off command.

Now you know how to use trace level 2 and strict mode in a Windows PowerShell script. Debugging Week will continue tomorrow when I will talk about more cool debugging stuff.