Note This is the third part in a series. You might also enjoy reading:

Yesterday, we learned that in Lync, you can "disable" a user or you can "remove" a user. We actually disabled the Lync user in that post, which meant that the attributes and information were still in Lync, but the user was unable to access and use Lync. This is like when you disable a user in Active Directory.

Today we're going to see how to remove that user, or many users if you need to.

Let's keep one key point in mind: Short of trying to restore from backup, this is a permanent operation. So we have a couple things to think about:

In the GUI interface, it's very easy to remove a user from Lync (presuming, of course, that you have all the permissions and are a member of the correct groups). First, access the Lync Server Control Panel:

Then simply select the users you want to remove, click Action, and click Remove from Lync Server: 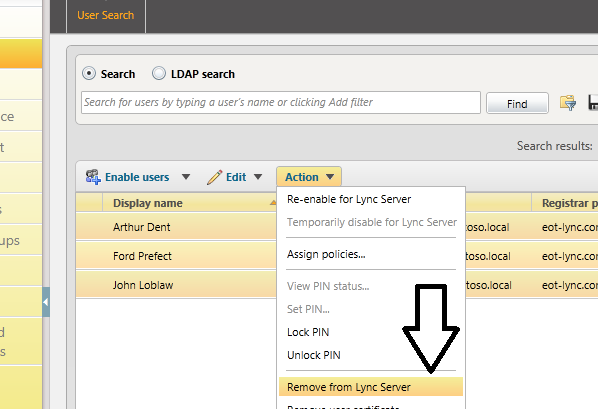 Within a prompt or two, all of these people would be removed. For a few people, that could be OK. What about removing hundreds of dead accounts? Perhaps you want a rollback option? For this, we can step in to Windows PowerShell to customize our options. We will be leveraging a new Lync cmdlet called Disable-CSUser.

The first time I saw this cmdlet, I made the mistake of presuming that it was meant to only disable access (like we did in Part 2). Fortunately, I found out in a lab environment that this is not true. It really should have been called Remove-CSUser because you are removing the object from Lync.

If it makes it easier to remember or use, we can make up an alias like this:

Now removing an object is quite simple. We supply in the identity and…

Oh, wait a minute! Didn't I say we wanted to keep two important things in mind?

So to prevent mistakes from happening, or at least giving you a chance to see what is going to happen before it does, the Disable-CSUser cmdlet (like many "destructive" cmdlets, as I like to think of them) has the GREATEST feature ever created in Windows PowerShell—the -whatif parameter.

To see what would happen if I tried to remove Mr. Ford Prefect from Lync permanently without actually removing him, I can do this:

Windows PowerShell and Lync will respond with this lovely little line:

If I had inadvertently piped in a large list of users, this cmdlet would have warned me before I had to fill out an incident report for the sudden loss of Lync access to many of the staff.

Like the other Lync cmdlets, this one cannot accept an array of information. But we can pipe information the same as before! So if want to shut down Lync access for all Active Directory accounts that are co-op students, we can first grab a list from Active Directory:

We can take that list and pipe it to the Disable-CSuser cmdlet, but we're going to tack on a –whatif just in case we made an error:

Then if we we are satisfied with the results, we remove the -whatif, and we can remove them with the knowledge that we can perform the task in a controlled manner.

Now all is well with the world, except of course, our co-op students are madly scrambling about wondering why they can't chat with each other in Lync anymore.

Pop back in tomorrow as we check out the important second part of disabling a user—a rollback plan!

Doctor Scripto June 25, 2014
0 comment
Managing Lync Server 2013 with Windows PowerShell—Part 4
Summary: Have a rollback plan for disabling a user in Lync.  Hey, Scripting Guy! Before I shut down all of these Lync accounts on our environment, my boss would like...