Learn How to Use PowerShell to Parse the Firewall Log

Microsoft Scripting Guy Ed Wilson here. Having recently returned from a road trip that entailed nearly two weeks in hotels, I can sympathize with you about connecting to strange networks. I can assure you that the firewall in Windows 7 does in fact possess the ability to create a log. Whether or not that log is enabled is a matter of personal preference, Group Policy preference, or default behavior.

First, the defaults: on both Windows 7 and Windows Server 2008 R2, Windows Firewall is enabled, and the logs are created in the %systemroot%\system32\logfiles\firewall directory. The file is called pfirewall.log. Unfortunately, the default logging behavior is to not log dropped packets or successful connections, which means there is no logging actually going on. I recommend changing this to log both dropped packets and successful connections. 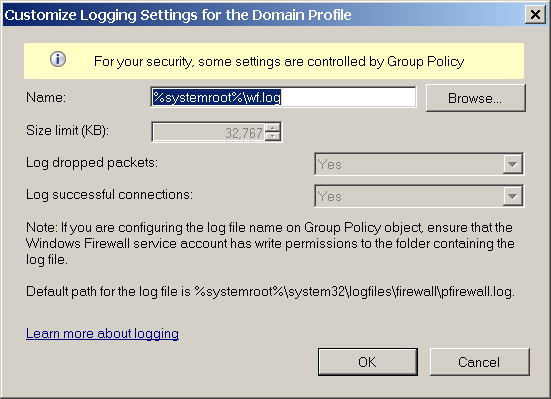 In addition, because the Windows Firewall can be set with different settings based on the detected network connection type, you could have different logging taking place from the Domain profile, the Private profile, and the Public profile. I would not necessarily recommend this configuration, but it certainly could be done. From a management standpoint, I think it would be easier to simply log both successful connections and dropped packets to the same log from all three firewall profiles—in this way, only one log file must be parsed. I also recommend keeping both the default location and the default name of the firewall log as well. If default log names and locations are maintained, it makes it easy for scripts to obtain the information. The NetSh utility can be used to obtain logging locations for the three different profiles. The actual NetSh command is shown here:

The command and output are shown in the following figure. 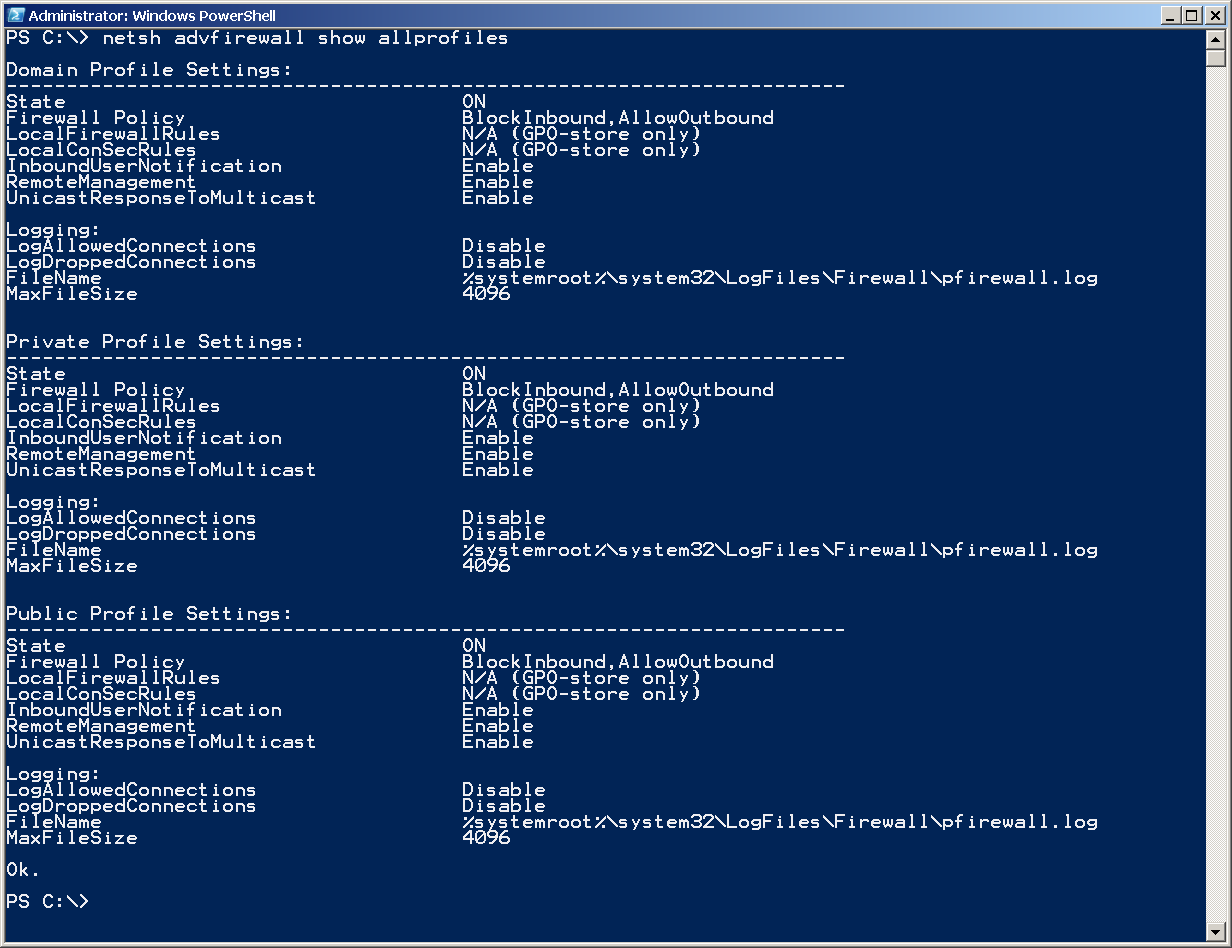 I can use the Select-String cmdlet to parse that output and return the firewall log locations. This command and associated output are shown here:

From examining the above output, I am able to see that all logging takes place in the same log. I am not able to use %systemRoot% directly from within Windows PowerShell. I can, however, use the systemroot environmental variable, as shown in the following code:

I can even use the –replace operator, and replace %systemroot% if I wish to do so, as shown here (the % symbol is an alias for the ForEach-Object cmdlet):

BP, the one thing to keep in mind when working with any log that is stored in the windows directory is that it will require administrator rights for access. In Windows PowerShell, this means right-clicking the Windows PowerShell icon, and selecting Run as Administrator from the shortcut menu.

Using the Select-String cmdlet, I can read and parse the log in one operation. This command appears here. For readability, I am going to store the path in the firewall log in a variable. This variable assignment is shown here:

To allow me to read the log, I am going to pipe the output to more. This command is shown here: 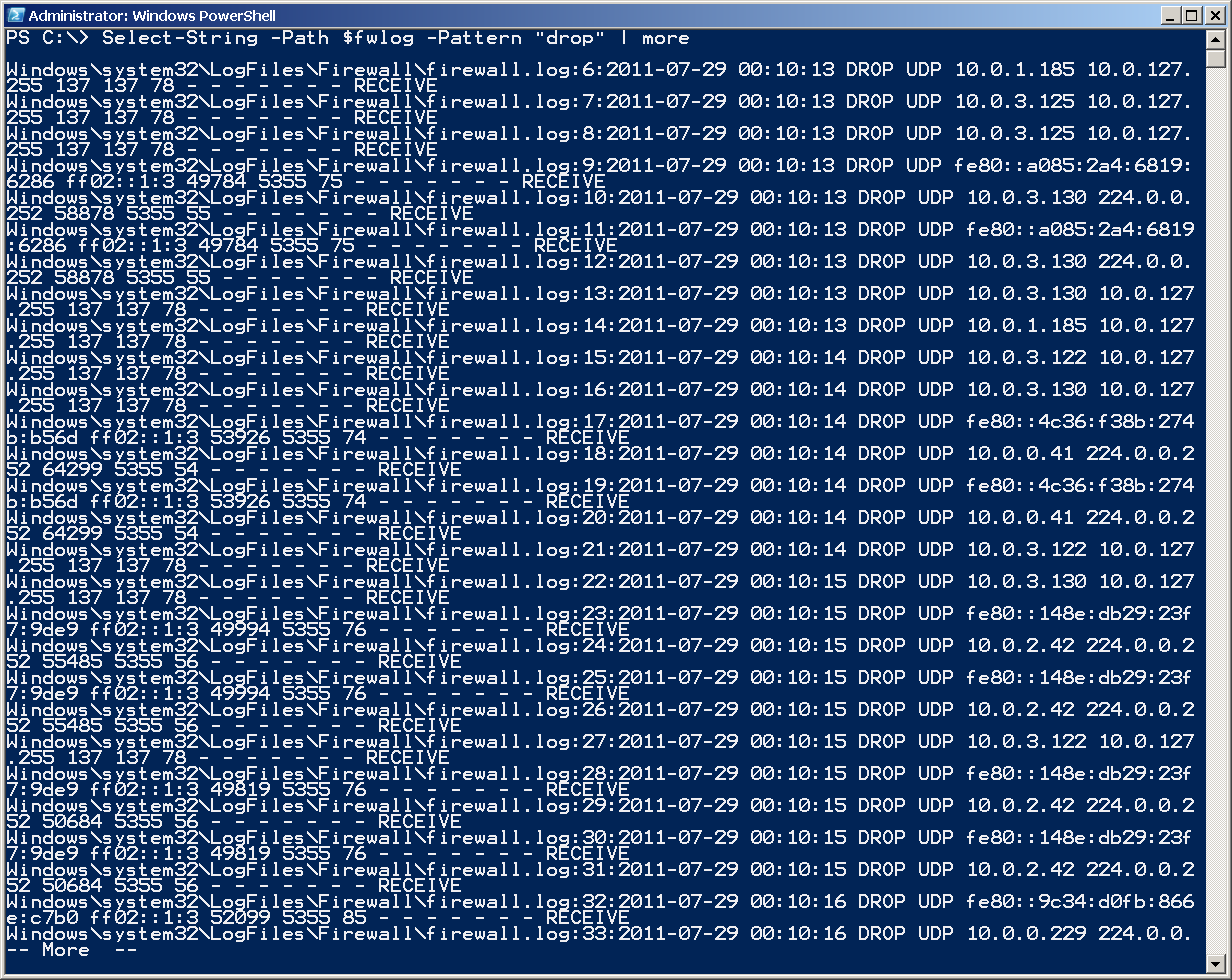 If I want to see how many dropped UDP and TCP packets appear in the log, I can obtain that information by using the Measure-Object cmdlet:

So, there are 33,436 dropped UDP packets. What is the timespan that is covered by this log? To figure this out, I use the Select-Object cmdlet (the alias is select). I choose the -first and the -last entries.

From looking at the preceding entries, it seems the log runs from a little after midnight for about an hour. Actually, we have 33,436 dropped UDP packets in 1 hour and 10 minutes. If I want to look at the number of dropped TCP packets, I perform the same operation. As shown here, there were only 43 dropped TCP packets:

I can easily modify the query to find out the numbers of permitted TCP and UDP packets, as shown here:

Other patterns can be used to parse the log file. They would follow standard patterns for either regular expressions or wildcard characters.

Use an Easy PowerShell Command to Search Files for Information
Summary: Learn how to use a Windows PowerShell command to search easily for information in a collection of files.   Hey, Scripting Guy! I need to be able to parse ...

Doctor Scripto
August 4, 2011
1 comment
Use PowerShell to Open Files That Contain Matching Words
Summary: Learn how to use Windows PowerShell to search a folder for matching strings and to open them automatically in Notepad.   Hey, Scripting Guy! I have been ...