Join Me in a Few String Methods Using PowerShell

Microsoft Scripting Guy, Ed Wilson, is here. This morning while I was eating breakfast and reviewing my email on my Surface 2 Pro, I noticed that I have meetings all afternoon. Luckily, I was up early, and so I can get my writing done before the meetings start. The good thing is that I love meetings. Or, perhaps, I should say, that I love good meetings. Useless meetings are, well, useless.

But a good meeting is great because it lets me collaborate with brilliant people, and I always leave the meeting in a better mood than when I showed up. In fact, good meetings become the highlight of my day. Today’s meetings have the potential to be awesome, so I am looking forward to spending the afternoon collaborating with some of the brilliant people who are on my team. It will be awesome.

The .NET Framework contains a class in the System namespace named String. The String class contains a number of methods and a few properties and other things. Complete documentation for the String Class resides on MSDN. A number of the methods of the String class are static methods. This means that they are always available, and that I do not have to create a string (an instance of the class) to gain access to the method. The Join method is one of these static methods.

MSDN lists five overloads for the static Join method of the System.String class. Today, I want to talk about three of these overloads. The following table explains the three ways of calling the Join method.

One of the cool things that the Join method can do is join elements of an array of objects. It also permits me to specify what I want to use as a separator between each of the elements that is joined. But beyond being cool, this element is very convenient because it lets me join the elements together without having to explicitly convert the object elements to strings. A string representation of each object in the array is automatically derived by calling the tostring() method from the object. This method works well, and it uses this type of syntax:

In this example, I use the Get-Process cmdlet to obtain a collection of system.diagnostics.process objects. I then display the objects and separate them by using the pipe character. The commands are: 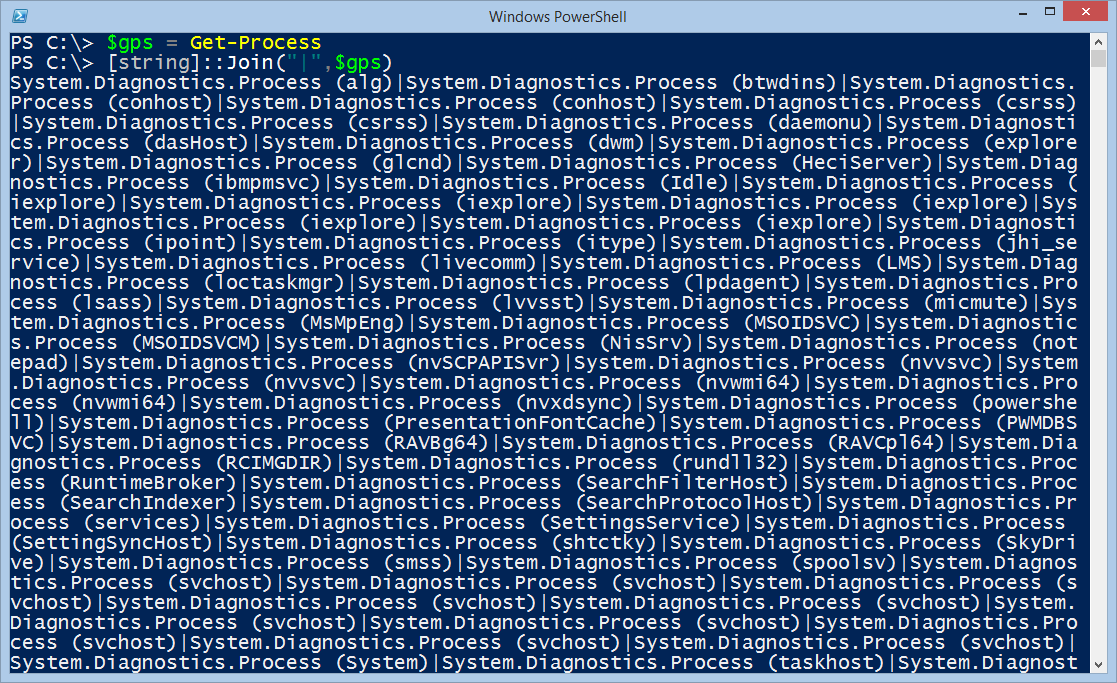 So that is not too impressive. Beginning with Windows PowerShell 3.0, I can use the automatic foreach technique to get a single property from each object in the collection. When I use this technique, the results are much more impressive. The following command will retrieve each name of each process and join the output:

The command and the output are shown here:

Joining an array of strings

The second way to use the Join static method that I want to look at today is the one I call “Hey, let's glue together a group of strings.” Or more briefly, it is the join an array of strings method. This method is really easy to use, and it acts exactly the way I would expect it to. The following tables shows the pattern for this.

In this example, the first thing I need to do is to create an array of strings. After I create the array of strings, I will call the static Join method and join together the array while using a semicolon for the separator between each of the elements.

Joining specific elements of an array of strings

One of the way cool things to do using the Join static method is to select a subset of the elements from an array of strings. The method call looks like the following:

Now I call the static Join method and I specify the separator to use, the array of strings, the start index, and the count. The result is that I join the last three words from my array. This command and output are shown here:

That is all there is to using the String class to join strings together. String Week will continue tomorrow when I will talk about splitting strings.