Build Your Own PowerShell Cmdlet: Part 3 of 9

Summary: Microsoft Windows PowerShell MVP, Sean Kearney, continues a series of guest blogs that detail how to build your own cmdlet.

Note This is Part 3 of a nine-part series about building your own Windows PowerShell cmdlet. Read the entire series as it unfolds.

We need to do a few minor things. First, we preface the entire script block from beginning to end as a function. But there are rules for becoming a real cmdlet. Just ask that Pinocchio character. The biggest rule is formatting the name. It must follow a Verb-Noun format. The noun should be singular. The third and most important rule that you shalt follow (less the Lords of Monad come crashing through your door), is to use one of the approved verbs in Windows PowerShell.

Would it surprise you to find that the list is built-in to Windows PowerShell? Just run the cmdlet Get-Verb. This will give you an output similar to the one shown here. 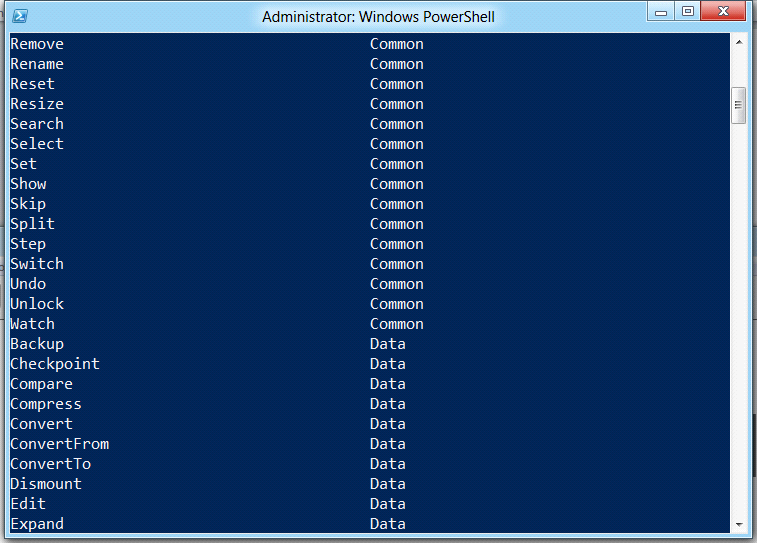 How do you choose an appropriate verb? Think of what you’re doing and apply a little common sense. Verbs are broken up into individual groups like Common, Data, Lifecycle, Diagnostic, Communications, Security, Other, and SwissCheese.

OK, fair enough. There is no SwissCheese group. I made that one up to see if you were reading. But when you want to write a cmdlet, think about what you are trying to do, and find a verb that seems to make sense.

In our case, we are adding a log file to our file system. Let’s see if there is a verb called Add.

Running this cmdlet confirms that Add is a valid verb in Windows PowerShell, and it is a member of the Common group. This suggests that it’s pretty flexible for usage.

So remember the rule: it has to follow a verb-noun combination for it to be a real cmdlet. Here’s the tricky part. “Noun” is open to interpretation. Although most of the verbs in Windows PowerShell will be found in the standard Webster’s Dictionary at your local library, odds are that ADObject or QADUser won’t be.

So think of a Windows PowerShell noun as something more of a thing that you’re referencing. The name of the thing may only be unique to your system. In our case, we are adding a log file, so we can use the name pairing of Add-LogFile.

So let’s convert our present script to an Advanced function called “ADD-LOGFILE.”

# GET the Current Date for our Logfile

# Extract the Date removing the “/”

# Extract the Time removing the “:”

# Test and ensure file does not already exist

# If file exists, return a status of Boolean $False for Unsuccessful

# Return the Full path and filename if successful

Let’s save this as a new Windows PowerShell script and call it C:\PowerShell\addlogfunction.ps1.

When we execute this script, it will appear to do nothing.

Before you start to go for that sad trombone link, your script DID work.

To test your function, just key in:

You can even run Get-Help on it—although the Help will be quite sparse at the moment. 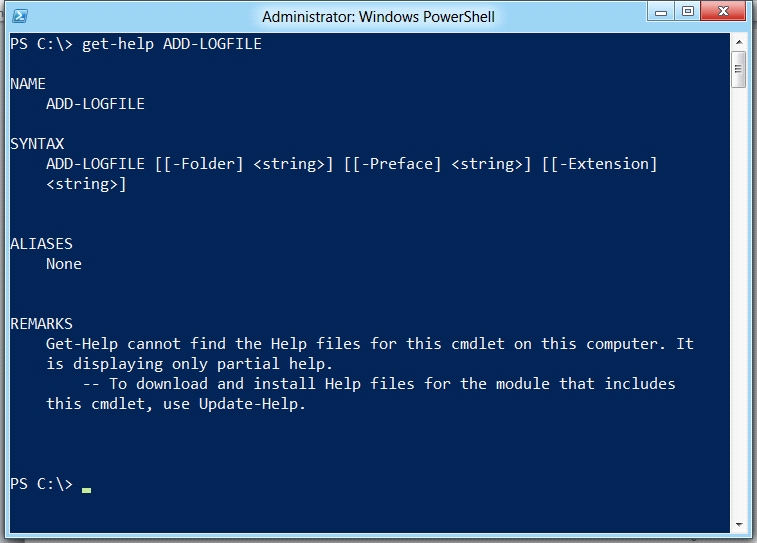 Thanks Sean! This really good stuff. Keep it coming.  It is great to have an honorary scripting guy in the house!

PowerTip: Use PowerShell to Write to an Event Log
Summary: Use the Write-Eventlog Windows PowerShell cmdlet to write to a standard or to a custom event log.   How can you easily write output to an event ...