Microsoft Scripting Guy, Ed Wilson, is here. Charlotte, North Carolina is alive with color this morning. There is a blue jay sitting on the light post at the end of the driveway, and a cardinal munching on our newly sewn grass seed in the front yard. The various bushes, trees, and shrubs are blooming in the neighborhood. But the chief color right now is the yellowish-green color of the pollen from all the tall willowy southern pines. These evergreens guarantee color all year long; although right now, their chief contribution is the color of pollen. It will be this way for the next few weeks. The rain yesterday knocked it from the air, and left it on the grass, the drive, and the sidewalks of our neighborhood. The Scripting Wife promptly closed the windows and turned on the air conditioner. Me? The pollen does not bother me too badly, so I prefer to sit on the lanai with my laptop, the ceiling fan, a cup of English Breakfast tea, and a freshly baked blueberry scone.

That’s the nice thing about wireless—I can now work the way I prefer to work instead of being tied to a within 10 feet of a LAN drop. Beyond peaceful coexistence with my feathered friends, there is another reason I am sitting on the lanai…I am looking for the cable truck because my Internet connection suddenly dropped off this morning while I was checking my email. This is a real shame because I am missing a meeting I really wanted to attend. Oh well. At least I have my Windows7 phone. (Disclaimer: my employer, the Microsoft Corporation, bought me a Windows7 phone. They did not buy the Windows7 phone that the Scripting Wife uses, but she had to have one after she saw how cool my phone was.) So I can keep in touch with all the members of my team—in fact, I used it to look up the support phone number of my ISP.

The problem of uninitialized variables

One of the cool things about writing Windows PowerShell scripts (indeed, writing most scripting languages) is that you can quickly whip up a bit of code to solve problems. Some languages make this easier than others, some are quite verbose, and others are rather terse, but one advantage of scripting is that it permits rapid development.

This advantage is also a disadvantage. It permits bad habits. As long as you are aware of the bad habits and their attendant consequences, you can use this to your advantage. After all, the goal is to quickly solve a problem. But every so often, these bad habits can cause horrible consequences. This situation usually occurs when an impending deadline is rapidly barreling down the track, and the svelte one-liner has morphed into a 550-line FrankenScript. Having stood at the end of a darkened tunnel with a single light looming large upon my countenance whilst frantically attempting to unravel a mess of spaghetti code, I decided to embark upon a quest for Windows PowerShell best practices (indeed, that was one reason for my book).

The result of running this script three times is shown in the image that follows. 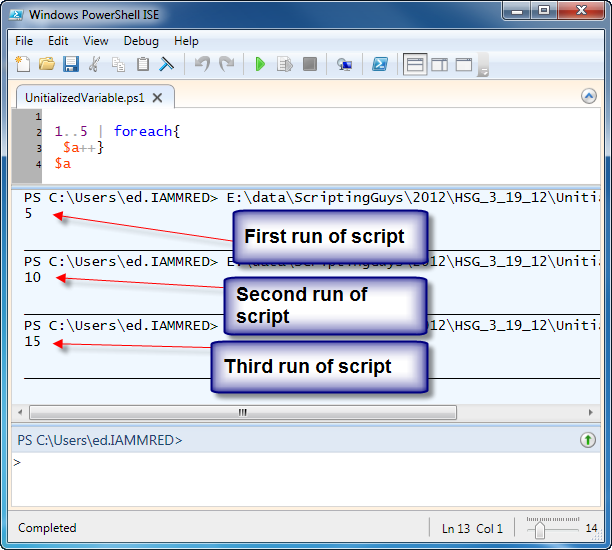 The problem with such a script, especially when it is run from within the Windows PowerShell ISE, is that the initial value of $a changes each time the script runs. Therefore, you never know the final value of the $a variable. If you are counting something like running processes, stopped services, or errors in a particular event log, it is difficult to know what the expected value might be; and therefore, it is easy to let the error slip by undetected.

Detecting and solving the problem of uninitialized variables 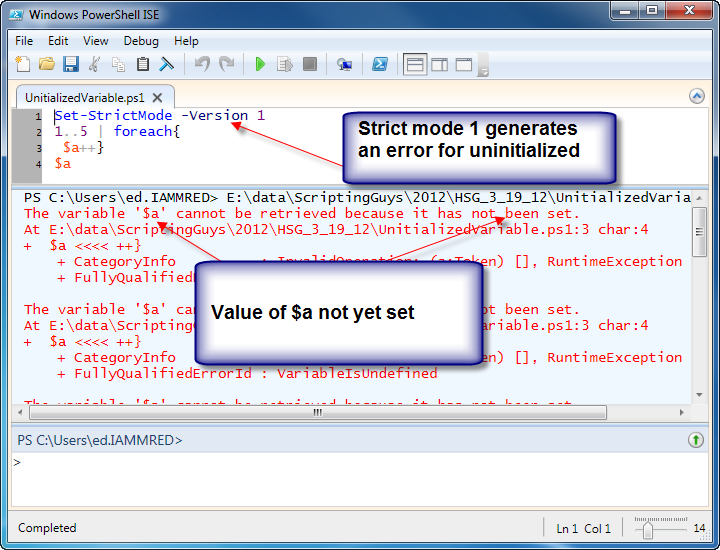 Use the version to apply the right amount of protection

It is important to keep in mind what –Version 1 and -Version 2 check for in strict mode. -Version 1 checks for uninitialized variables. See yesterday’s blog, Use Strict Mode for PowerShell to Help You Write Good Code, for a discussion of the -Version 2 checks.

Correcting the problem of the uninitialized variable requires declaring the variable and assigning a value to it. This technique is shown here.

Now when the script runs, the correct value returns. This is shown in the following image. 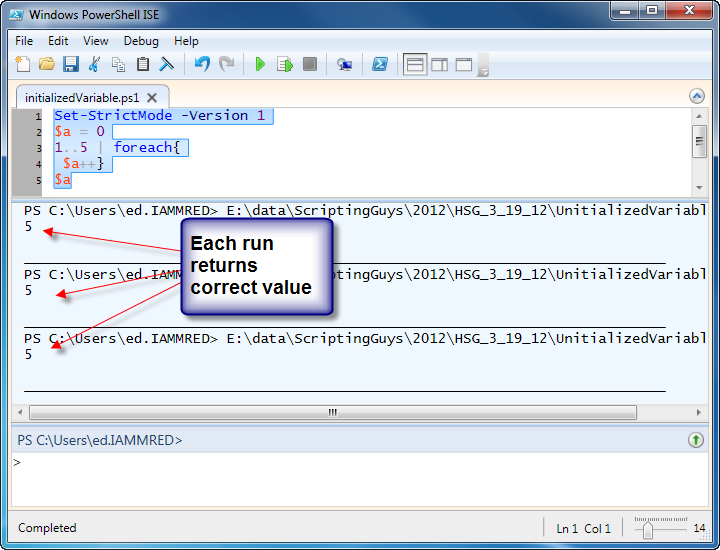 However, if I attempt to access the value of the variable from within an expanding string, no error generates. This technique is shown here.

The previous commands and their associated output are shown in the image that follows.

When set, both of the two commands that follow generate errors.

The previous commands and their associated output are shown in the image that follows.