In this release we have closed a total of 40 issues, including a built-in Test Explorer, validation of breakpoint targets when debugging, and the ability to run any code selection in the Python Interactive window.

This release includes the ability to visualize, navigate and run unit tests through a test explorer, a feature that is commonly requested by our users. To access it, you can run the command Python: Discover Unit Tests from the Command Palette (View -> Command Palette). If the unit test feature is disabled or no test framework is configured in the settings.json file, you’ll be prompted to select a framework and configure it. Once tests are discovered, the Test Explorer icon will appear on the Activity Bar.

The tests files and suites are displayed in a tree view with their corresponding test methods, and can be expanded or collapsed accordingly. 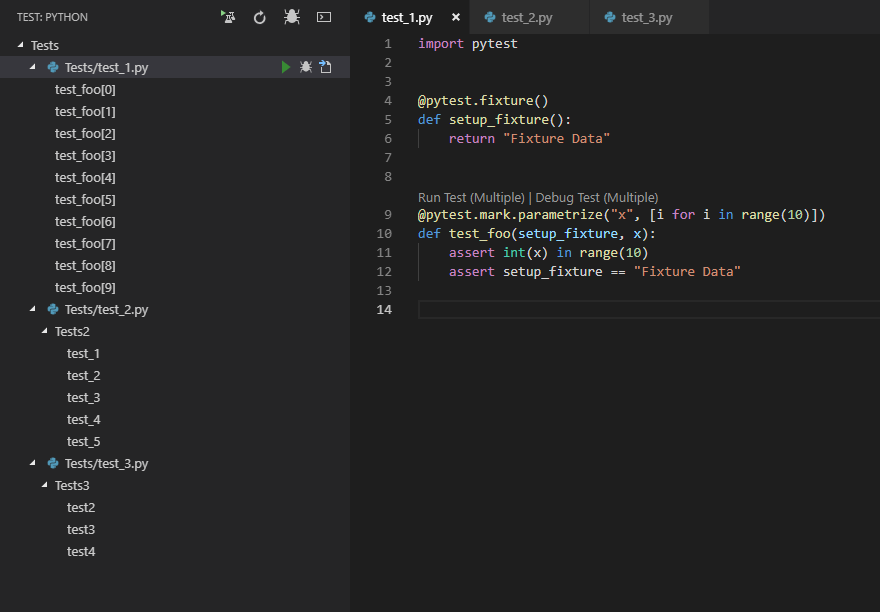 Through the buttons located on the top right of the test explorer, you can run all displayed tests, run the failed ones (only shown if there’s a failing test), update/refresh the tree view, debug all tests and open the output window for the Python Test Log:

You can also run and debug a single test method or all the tests from an entire file or suite through the buttons that appear when you select or hover over an item in the tree view, as well as navigate to the line of each test:

The test framework can also be chosen and configured by running the newly added command Python: Configure Unit Tests from the Command Palette. As a reminder, the Python extension supports unit testing with Python’s built-in unittest framework  as well as pytest. Nose is also supported, although the framework itself is in maintenance mode.

This release also includes an enhancement to the debugger: validation of breakpoints targets. If a breakpoint is set on a line where breakpoints are invalid (e.g. blank lines, pass statement, lines in the middle of a multi-line statement), then it’s automatically moved to the nearest preceeding valid line:

This way the breakpoints added are ensured to be hit. Previously the debugger would continue running past invalid breakpoints, causing confusion or wasted time.

You can also use the shortcut key Shift+Enter by changing the python.dataScience.sendSelectionToInteractiveWindow setting to use the Python Interactive window instead of the default terminal.

Python in Visual Studio Code – March 2019 Release
We are pleased to announce that the March 2019 release of the Python Extension for Visual Studio Code is now available. In this release we closed 52 issues that includes Live Share support in the Python Interactive Window, support for installing packages with Poetry, improvements to the Python Language Server and to the Test Explorer.

Luciana Abud
March 26, 2019
2 comments
Python in Visual Studio Code – April 2019 Release
We are pleased to announce that the April 2019 release of the Python Extension for Visual Studio Code is now available. In this release we have closed a total of 84 issues, including a Variable Explorer and Data Viewer, enhancements to debug configuration and additional improvements to the Python Language Server. Check out he full list of fixes and improvements in our changelog.