In this release we have closed a total of 49 issues, including:

The extension now contains new editor-centric interactive programming capabilities built on top of Jupyter. To get started, make sure to have Jupyter installed in your environment (e.g. set your environment to Anaconda) and type #%% into a Python file to define a Cell. You will notice a “Run Cell” code lens will appear above the #%% line:

Clicking Run Cell will open the Python Interactive window to the right and run your code. You can define further cells or press Shift+Enter to run the current cell and automatically create a new one (or advance to the next cell).

Separately, if you were to open a Jupyter Notebook file (.ipynb), you will now be prompted to import the notebook as Python code:

Cells in the Jupyter Notebook will be converted to cells in a Python file by adding #%% lines. You can run the cells to view the notebook output in Visual Studio code, including plots: 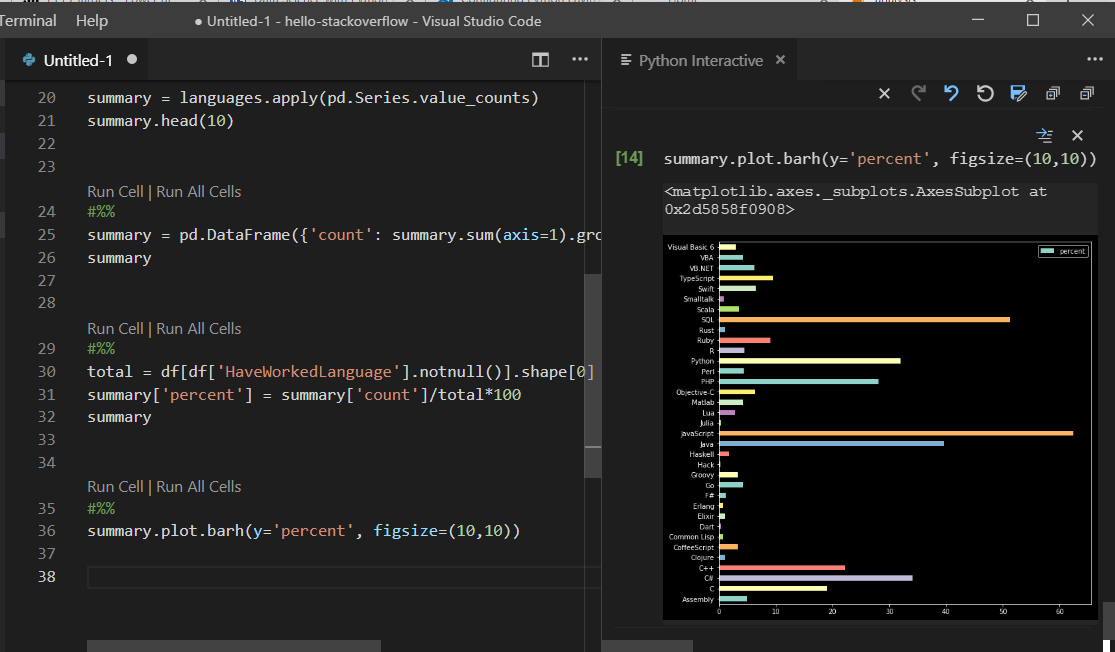 Check out our blog post Data Science with Python in Visual Studio Code for a deep dive of the new capabilities!

Completions in the Debug Console

When stopped at a breakpoint and typing expressions into the debug console, you now get completions appearing:

Completions are based on variables available at runtime in the current scope.

The Python extension will now detect new virtual environments that are created in your workspace root while Visual Studio Code is running. You can create virtual environments from the terminal, and they are immediately available to select by clicking on the interpreter selector in the status bar, or by using the Python: Select Interpreter command.

In the screenshot above  a new virtual environment named “env” was created in the terminal, and then set the active environment, as indicated by ‘env’ in the status bar. Previously you had to reload Visual Studio Code for the new environment to be available.

Python in Visual Studio Code – November 2018 Release
We are pleased to announce that the November 2018 release of the Python Extension for Visual Studio Code is now available. This release was a quality focused release, we have closed a total of 28 issues, improving startup performance and fixing various bugs related to interpreter detection and Jupyter support. Keep on reading to learn more!

Dan Taylor
November 29, 2018
0 comment
Python in Visual Studio Code – December 2018 Release
We are pleased to announce that the December 2018 release of the Python Extension for Visual Studio Code is now available. This release was a short release, where we primarily focused on two top-requested features for the data science experience shipped in November: remote Jupyter support and export Python files as Jupyter Notebooks. We have also fixed many issues reported on GitHub, and you can see the full list in our changelog.