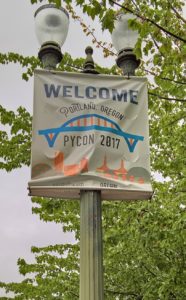 With PyCon US 2017 happening later this week, we wanted to let you know what we will be up to at the conference!

To start, thanks to our platinum sponsorship this year, we are going to have a booth in the exhibit hall. This will provide you a place to come if you have any questions involving Python and Microsoft. We are also going to have a constant rotation of 10 and 20 minute demos at our booth that will include: Come by our booth to see the schedule for when we will be demoing what!

But our participation doesn’t stop at sponsorship and demos. Both Steve Dower and myself will be attending the Python language summit. This is the once-a-year meeting where the core developers of Python have an opportunity to get together in a room and discuss various points and issues surrounding the language. We will also be attending the development sprints where we sprint with other core developers to resolve various design decisions, build some camaraderie, and generally just get some coding done!

Lastly, both Steve and I are presenting at the conference this year. Steve is giving his talk entitled “I Installed Python 3.6 on Windows and I Liked It” where he will discuss how Python 3.6 makes cross-platform support easier for Windows and UNIX easier. I will be giving my talk entitled “What’s new in Python 3.6” where I will cover the over 16 new features in Python 3.6 that make it one of Python’s largest release ever.

As with every year we expect to have a great time at PyCon US and we look forward to see those of you who are able to make it! PyCon US 2017 wrap-up
Last week we took our Python team on the road to PyCon US 2017, which was held in Portland, Oregon, USA. PyCon is our best opportunity for our engineers to meet the ...

Steve Dower May 30, 2017
0 comment
PyData Seattle is next week!
Next week, we'll be hosting PyData Seattle 2017 at Microsoft. Several hundred attendees, speakers and teachers will converge on our main conference center for three days ...