Script execution will stop at the line breakpoint when the $count variable is equal to 5.

In this example, I’ll show you some basic tasks in debugging a script workflow. We’ll set a line breakpoint and, at the breakpoint, we’ll display the statements that are executing and set a new conditional breakpoint. In this example we use the WFExample.ps1 script, which contains a workflow and a command that calls the workflow. 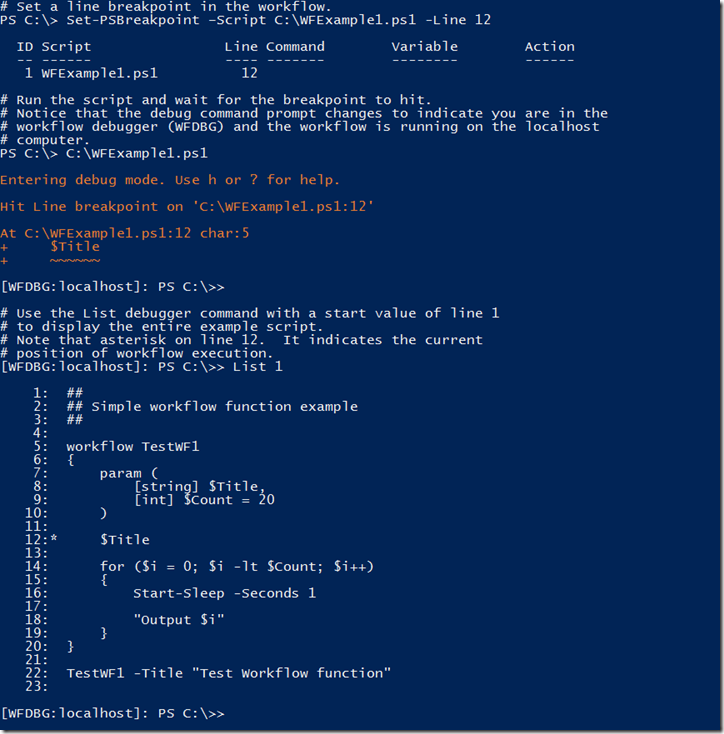 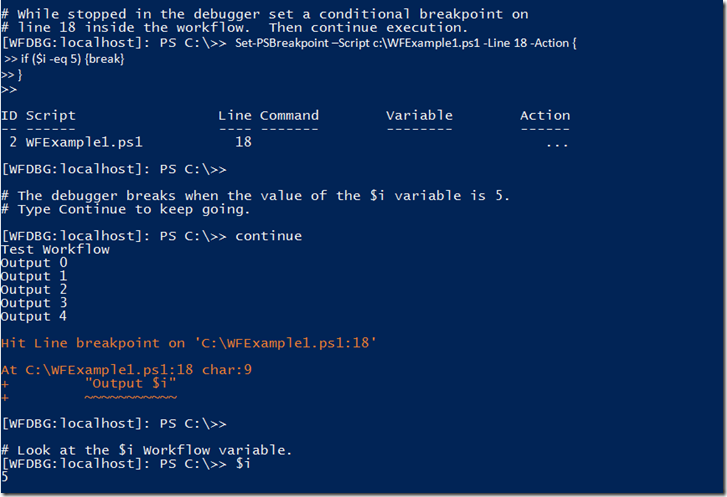 There are some limitations to workflow debugging.

· Nested workflow debugging is not supported. You cannot step into a workflow that’s being called by another workflow. Breakpoints set in a nested workflow will not be hit.

· You cannot debug Windows PowerShell activities as they execute.

· You cannot debug a script workflow that runs as a job. (To run a workflow script asynchronously as a Windows PowerShell workflow job, use the AsJob common parameter of script workflows). To debug, remove the AsJob parameter from your script temporarily, and put it back when you’re finished debugging.

Example2: Run a Script Workflow as a job 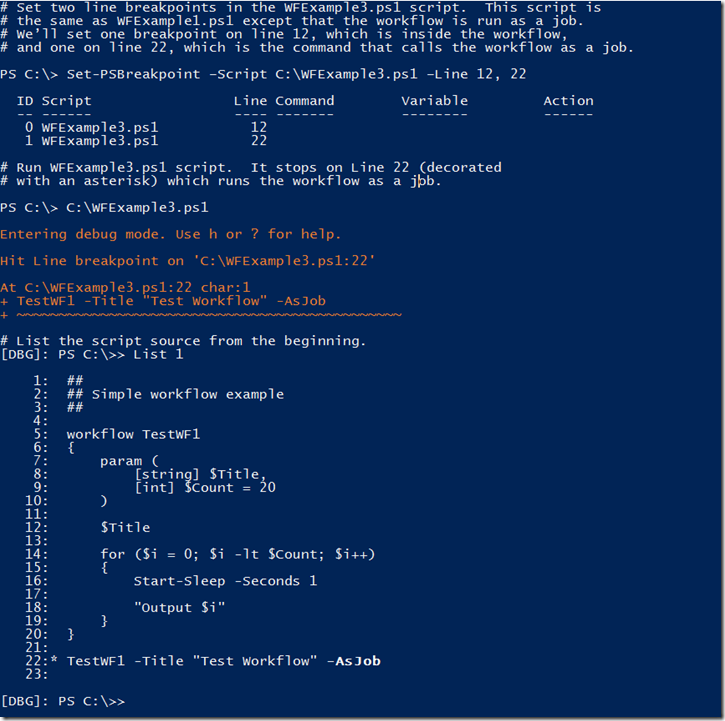 Example 3: Debugging a workflow in a remote session

In this example we’ll debug the workflow in the WFExample1.ps1 script. But, unlike our first example, the script is running in a remote session. 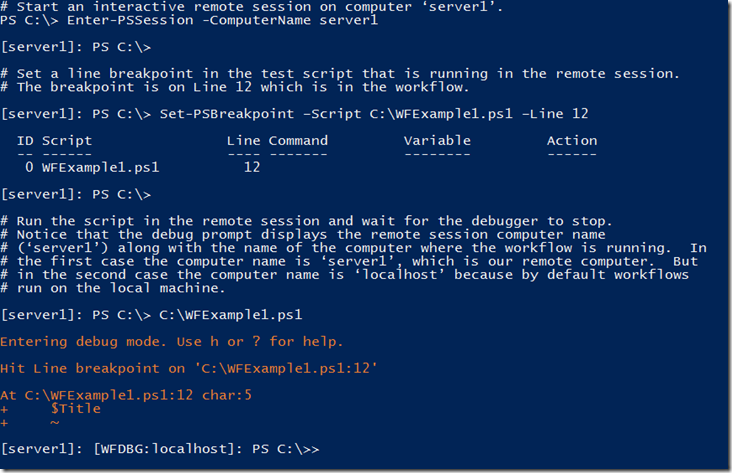 You can run workflows on remote machines. By default they run on the local machine, but you can specify one or more remote machines by including the –PSComputerName common parameter. Underneath the covers Windows PowerShell is using its job infrastructure to run the workflow on the remote machines. The workflow debugger handles all of this and modifies the command prompt when you are stopped in the debugger to indicate the machine that the debug stop pertains to. In addition the workflow debugger supports debugging workflows on multiple machines simultaneously. In this case, the debugger stops (whether due to a breakpoint hit or step action) alternate between machines in the order that the debug stop events arrive at the debugger. 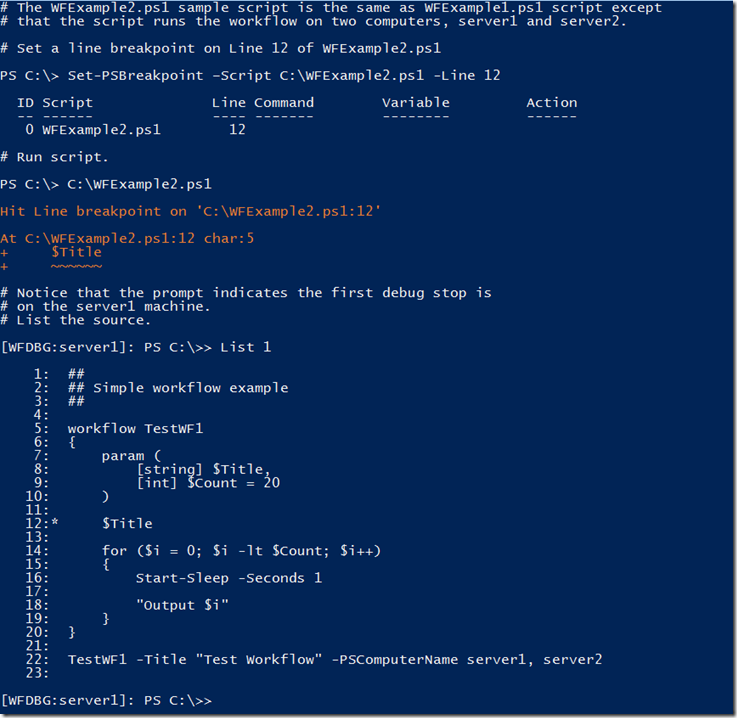 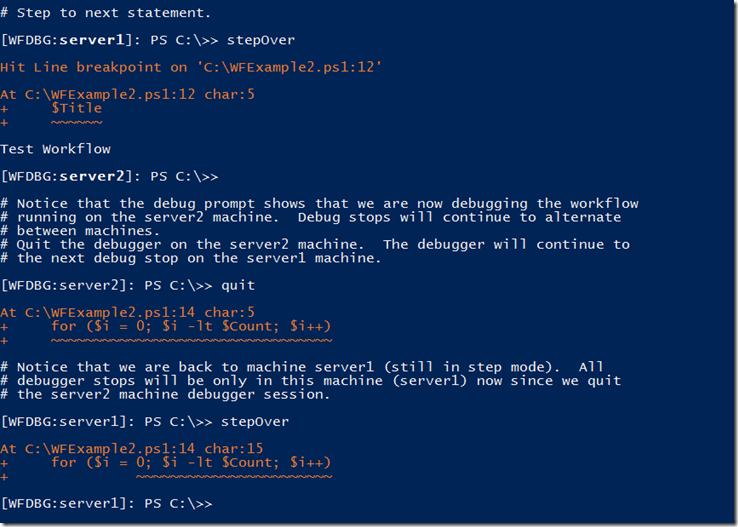 Script workflow debugging is a powerful new feature that lets you debug workflow script in both local and remote PowerShell sessions. With its integration with PowerShell’s script debugger, it gives you a much improved and seamless way to debug your script workflows.