Experimenting with OData in ASP.NET Core 3.1

A lot of developers have asked me recently about OData compatibility with ASP.NET Core 3.0 and again with .NET Core 3.1 after it’s very recent release.

This demand became more and more critical with the recent announcement from the .NET team around .NET Core 2.2 reaching the end of its life on Dec 23rd of this year.

And because of all of that, the OData team at Microsoft have been working diligently in the last few months to ensure a stable release of OData that supports .NET Core 3.1 makes it out to the public as soon as possible.

And while the final release might take a bit longer to be production-ready, the OData team has recently released a beta version for developers to experiment with it, learn about it’s capabilities and possibly build some demo APIs and leverage it in some POCs.

In this article, I’m going to show you how you can build a modern ASP.NET Core 3.1 API with OData by simply following very few simple steps.

In order for you to be able to create this demo on your local machine, you want to make sure that you have Visual Studio 2019 version 16.4 or later so you can leverage the capabilities of .NET Core 3.1, if you install that particular version of VS 2019 you will not need to install .NET Core 3.1 separately as it comes with the bundle.

You can check the current version of your Visual Studio 2019 by going to top menu, then Help then About Visual Studio as shows in the following screenshots: 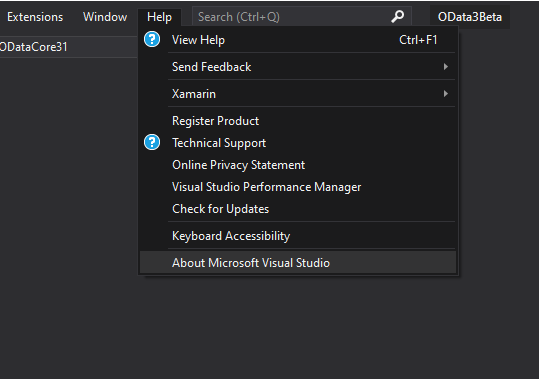 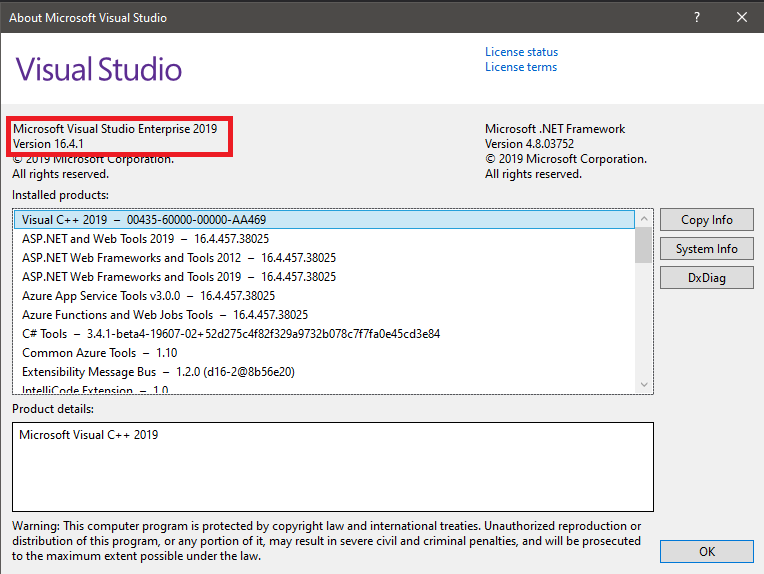 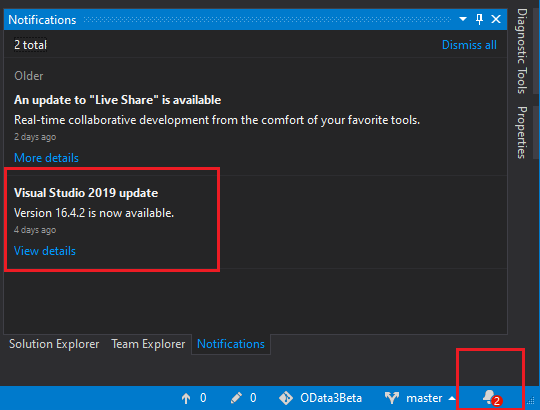 Once you click the “More Details” link, it usually takes about 10 seconds and then you should be prompt with a dialog to upgrade your Visual Studio instance as follows: 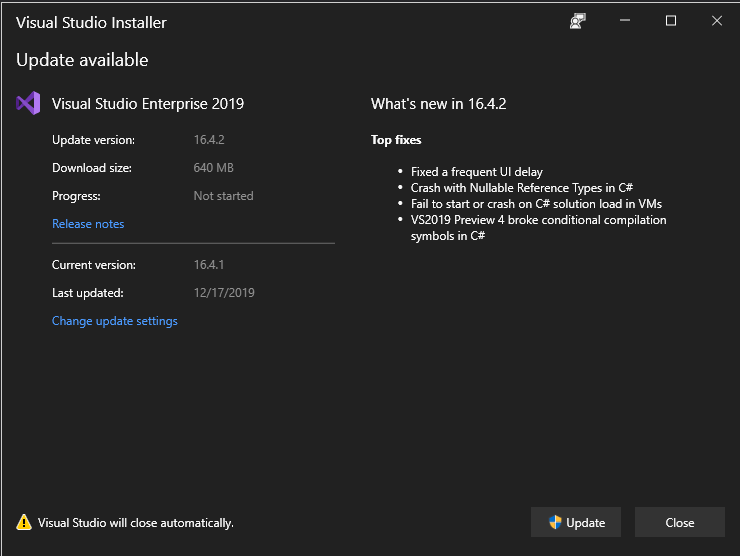 Once the upgrade is done, now you are ready to build ASP.NET Core applications with .NET Core 3.1, let’s talk about setting your project up.

For starters, let’s create a new ASP.NET Core Web Application by either starting a new instance of Visual Studio or simply going to File -> New -> Project, you should be then prompted with the following dialog: 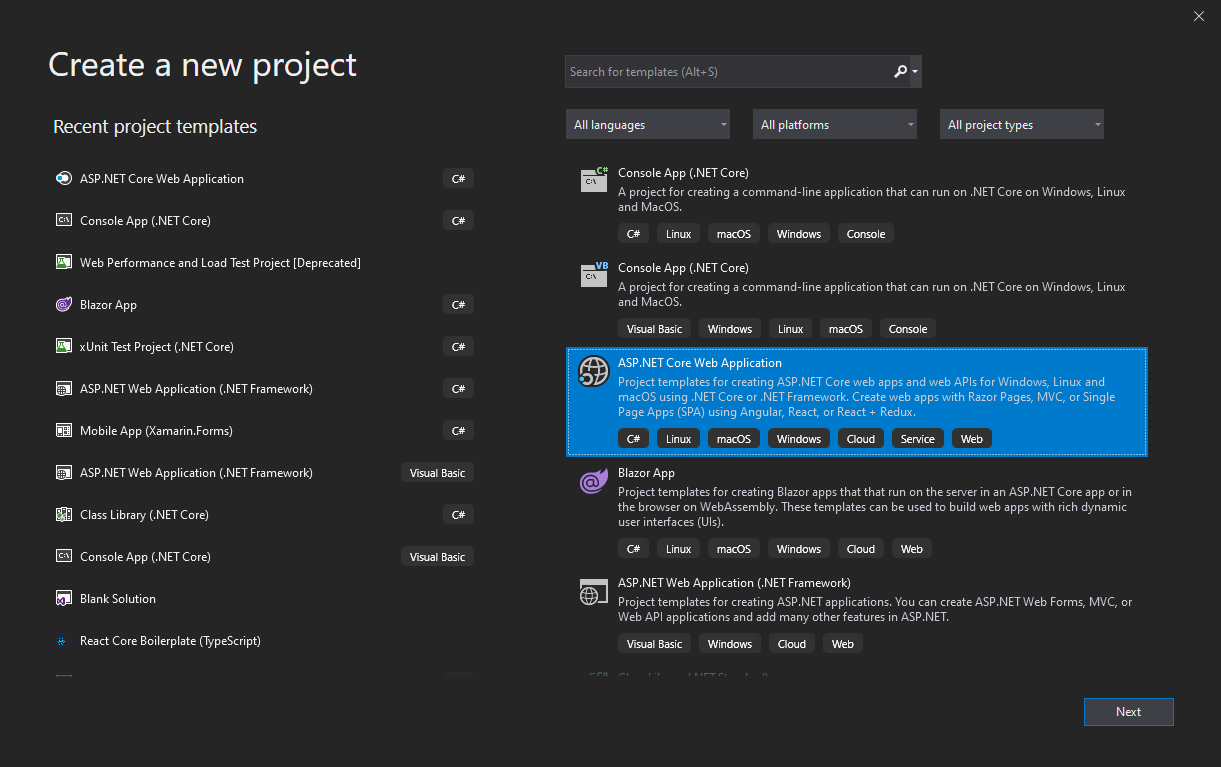 After selecting ASP.NET Core Web Application (with C#) click the Next button you will be prompted to create a new name for your project and then selecting the version and template of which your project should be based on as follows: 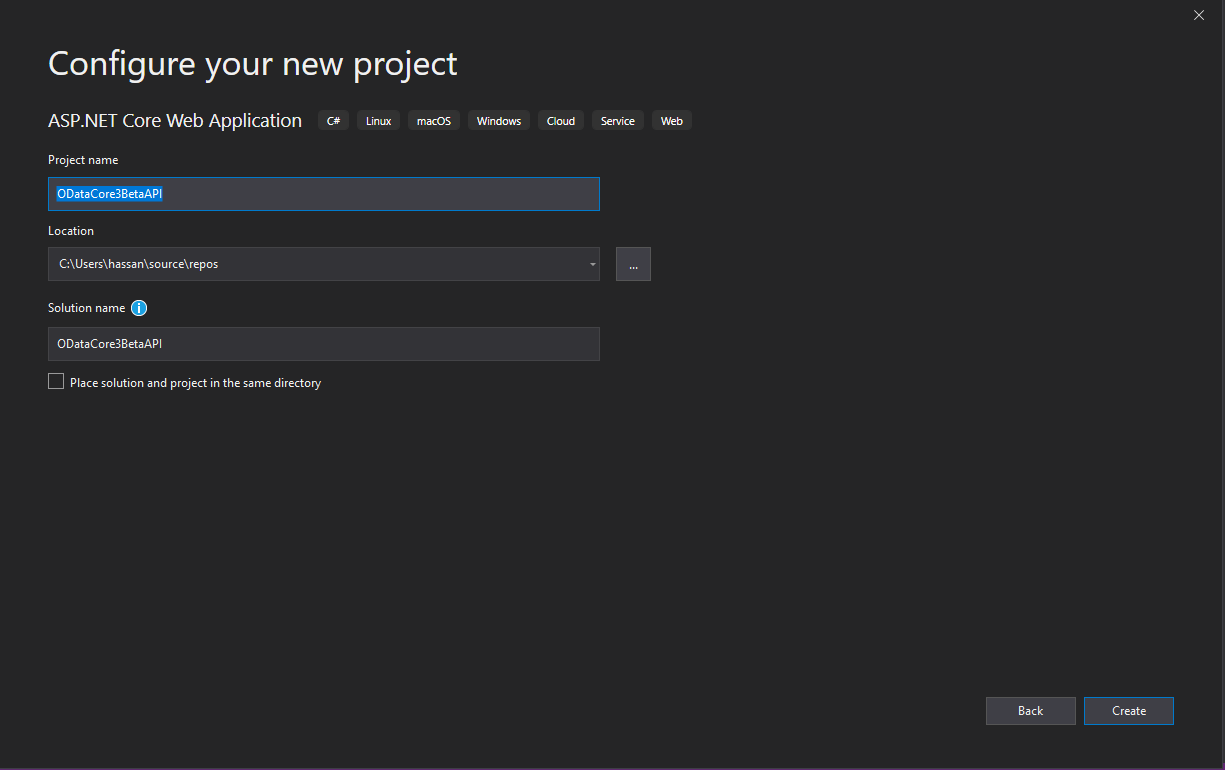 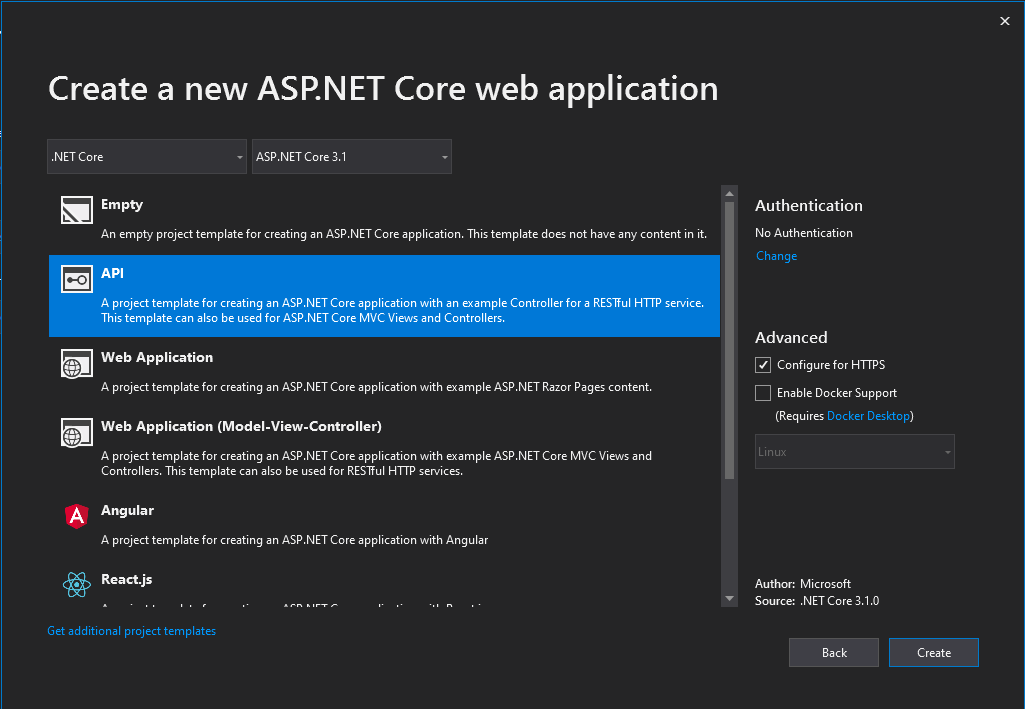 Please make sure you select ASP.NET Core 3.1 from the drop down menu at the top right side, and API as a template for your project then click “Create“.

Now that you have created a new project, let’s go ahead and install the beta release of OData for ASP.NET Core 3.1

There are two ways you can install the beta library depends on your preference, if you are a command line kind of developer, you can simply open the package manager console by clicking on the Tools top menu option, then Nuget Package Manager then Package Manager Console as follows: 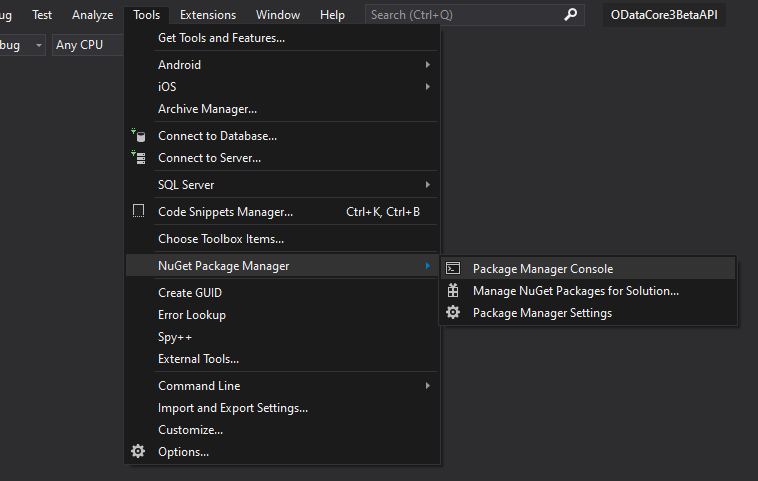 you will be prompted with a console window so you can type the following command:

If you don’t like using command lines, you can simply install the very same package by going to the exact same menu options we selected above, except you are going to choose Manage Nuget Packages for Solution instead of Package Manager Console the following dialog will appear so you can install the library as follows: 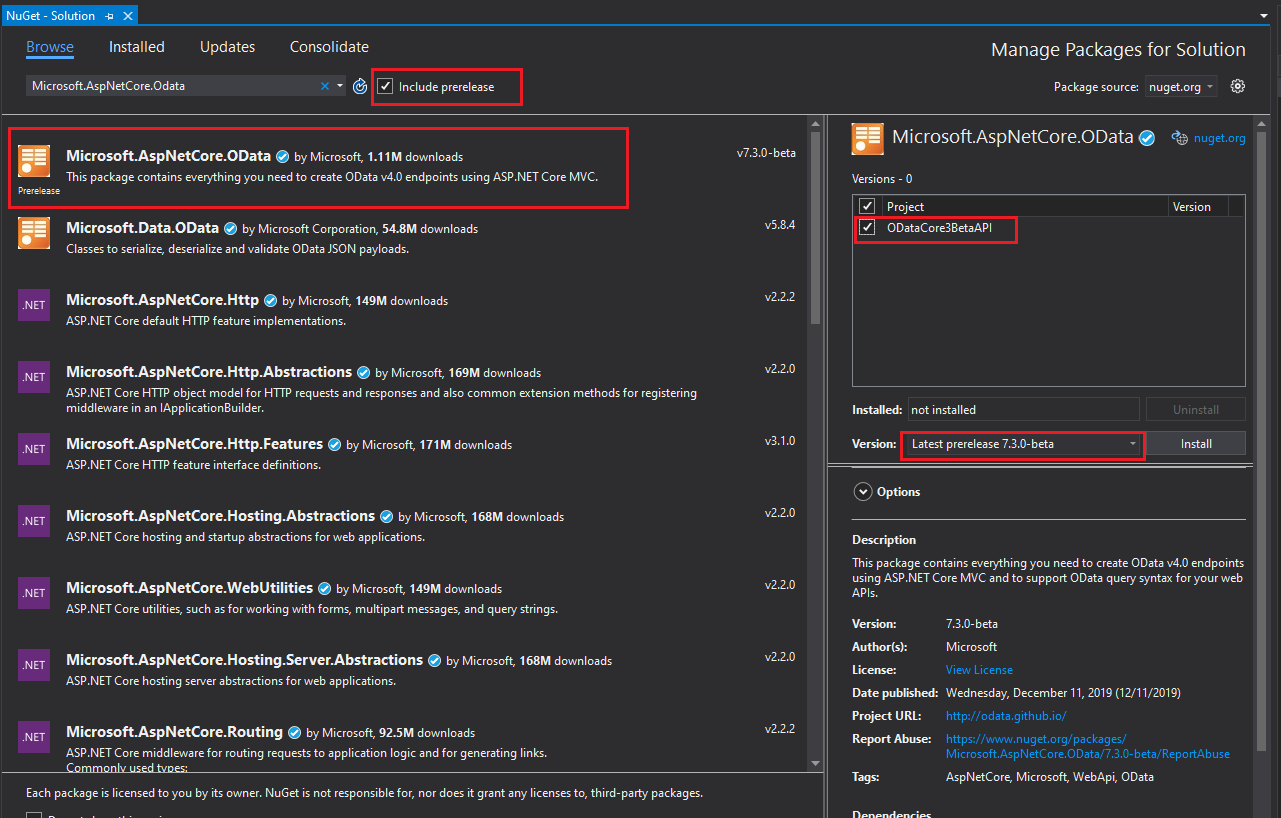 There are few things that I have highlighted in that screenshot that you need to pay attention to:

Now that we have OData installed, let’s create a Student model and create a controller to return a list of students as follows:

Now let’s create a simple API controller that returns a list of students:

Please notice that this controller is only created this way for a demo purpose, ideally your controller should return an IQueryable to achieve better performance and execute queries on your database server if you are retrieving your data from a database.

Our final step here is to modify the startup.cs file to support OData, our code here will be very similar to our code from previous articles, let’s start with the ConfigureServices method in our startup.cs file as follows:

You will notice a couple of changes in the above code, Adding OData which is just as similar as any other OData powered application.

The second change is disabling endpoint routing, let’s talk about that for a bit.

For starters, this is not an ideal situation, the final release of OData shall allow endpoint routing while supporting OData queries.

But for those who want to understand what endpoint routing setting is, especially for .NET Core 3.0 and above, here’s a quote from a previous post for Daniel Roth:

While it’s still possible to use the old UseMvc() or UseRouter() middleware in a 3.0 application, we recommend that every application migrate to Endpoint Routing if possible. We are taking steps to address compatibility bugs and fill in previously unsupported scenarios. We welcome your feedback about what features are missing or anything else that’s not great about routing in this preview release.

And while endpoint routing is one of the most important upgrades to ASP.NET Core 3.0, with this beta release you could still leverage the power of OData without leveraging endpoint routing temporarily.

With that being said, let’s move on to the next step which is implementing a GetEdmModel method as we have done previously and change the routing implementing in the Configure method as follows:

I have intentionally left the app.UseEndPoints to show you what code you need to remove (again, temporarily for this beta release) and what code you need to add to leverage the power of OData. And that should be the final step in this tutorial, now you can run you application and call your endpoint as follows:

and the results should be as follows:

If you have any questions, comments, concerns or if you are running into any issues running this demo feel free to reach out on this blog post, we are more than happy to listen to your feedback and communicate your concerns.

$select Enhancement in ASP.NET Core OData
The release of ASP.NET Core OData v7.3 brings a ton of improvements to $select functionality. In this article, I’d like to introduce some of the new features of $select...

Sam Xu
December 30, 2019
4 comments
Integrating Cosmos DB with OData (Part 3)
Sometimes requiring to build an entire ASP.NET Core application just for the purpose of exposing a RESTFul API endpoint to give your API consumers the ability to query, ...