Recently, we shared an overview of the new extensibility capabilities available for developers as part of the new Office 2016. In addition to the improvements discussed there, including connecting the applications you build to the data and services available in Office 365 and creating add-ins that connect to third-party services, we continue to support developers working in VBA by adding new objects and members to the VBA object model across nearly all the Office applications.

One thing to note, our engineering focus is Office web add-ins – web add-ins work across devices and platforms, and developers enjoy a modern web development experience. Support for web add-ins is already available in Office 2013 and 2016 for Windows, Office for iPad, and Outlook for Mac today, and they’ll come to the rest of Office clients over time.

Several Office desktop applications have new features that are exposed in the VBA object model. Here are some of the highlights:

Since the launch of Office 2016 for Mac in July, Mac OS X users around the world have been able to take advantage of the highly anticipated new features and improvements since the 2011 release. At the same time, some of our users also have sent us feedback requesting further improvements to our VBA support, particularly around VBA add-ins.

In response to this feedback, we’ll further improve Office 2016 for Mac’s support for VBA add-ins. Specifically, we’ll be adding Office ribbon customization via Ribbon XML, and making other improvements to Word, Excel, and PowerPoint for Mac to match their Windows desktop versions.

We are excited to announce that with the latest Office for Mac update, you’ll be able to fully customize the ribbon across Word, Excel, and PowerPoint for the Mac using familiar Ribbon XML.

Here’s how the Mac Word ribbon looks with a custom tab. If you’ve been customizing the ribbon on Office for Windows, you’ll find the Mac experience to be very similar. However, there are certain important differences to know about, as described in the table below.

* Most familiar Office Fluent Control Identifiers are compatible with Office for Mac. Some may not be available. ** May support this in future. *** Office 2016 for Mac doesn’t support third-party COM-Add-ins. No current plans to support these in the future. Ribbon customization via Ribbon XML is now available, however, it remains in preview and is disabled by default for this update. Follow the steps below to enable or disable it across Word, Excel and PowerPoint using the Terminal on Mac.

In early 2016, ribbon customization via Ribbon XML will be enabled by default for all customers.

How do I edit Ribbon XML?

You can edit Ribbon XML by using familiar Custom UI Editor Tool, which remains available only on Windows.

Will these updates be pushed as part of the auto-update process?

Yes. These updates will be pushed to all customers using Microsoft Auto Updater.

Is the structure of the XML file the same as that for Office for Windows?

Will the Office 2016 for Mac ribbon load the XML from both files, CustomUI.xml and CustomUI14.xml?

Yes, and just like the behavior in Office for Windows, CustomUI14.xml will be given preference over CustomUI.xml.

Will the Office 2016 for Mac ribbon accept PNG files that are loaded into the document’s custom UI as control images?

You spoke, we heard!

As we continue to improve the overall Visual Basic story on Office 2016 for Mac, we’ve added the following features to Visual Basic Editor:

You might not be aware that we recently added two new commands to the Visual Basic object model for Mac: GrantAccessToMultipleFiles and AppleScriptTask.

As Office 2016 for Mac is sandboxed, users are prompted to grant access every time a file access request is made. GrantAccessToMultipleFiles is a command that takes an array of file pointers and helps minimize the number of these prompts.

Sandboxing also severely breaks the previously existing MacScript command that allows the use of inline AppleScript in Visual Basic. This is where AppleScriptTask can help. Users can store an AppleScript file at a specified location on the disk and use AppleScriptTask within VB to invoke it. The location of these scripts is specified by the operating system and cannot be altered.

The MAC_OFFICE_VERSION conditional lets macros determine what version of Mac Office the user is running. This comes handy in cases where certain commands (like the two above) are available only on a given version, and invoking them on another version may result in errors.

Since Office 2016 for Mac Beta, we’ve been keeping close watch on issues relating to these new commands and have been making fixes. With this update, we’re releasing some important fixes that will considerably improve the overall performance of these commands. In particular, we’ve fixed various timeout issues related to AppleScriptTask.

Note The bundle IDs for Mac Word, Excel, and PowerPoint are:

The following is an example of a handler.

Existing macro file commands are changed to prompt the user for file access if the app doesn’t already have access to it. This means that macros that access external files cannot run unattended; they’ll need user interaction to approve file access the first time each file is referenced. You can use the GrantAccessToMultipleFiles command to minimize the number of prompts and make the experience better (see below).

This command lets you input an array of file paths and prompt the user for permission to access them.

Note Once permissions are granted, they’re stored with the app and the user doesn’t need to grant permission to the particular file anymore.

In Office 2016 for Mac, this new conditional tests which VB version the user is running. The following example shows how to use it in your code.

Note The “#If Mac” conditional remains unchanged from Office for Mac 2011.

Starting in Office 2016 for Mac, custom menus that were supported in Office for Mac 2011 are not supported anymore. We’re officially deprecating support for custom menus and CommandBar controls. A few legacy CommandBar controls may continue to appear on the Add-ins tab, however, we advise that you don’t write new code that uses either of the two. Starting today, if you have a VB add-in that requires a UI, it’s best to use Ribbon XML to write that UI. 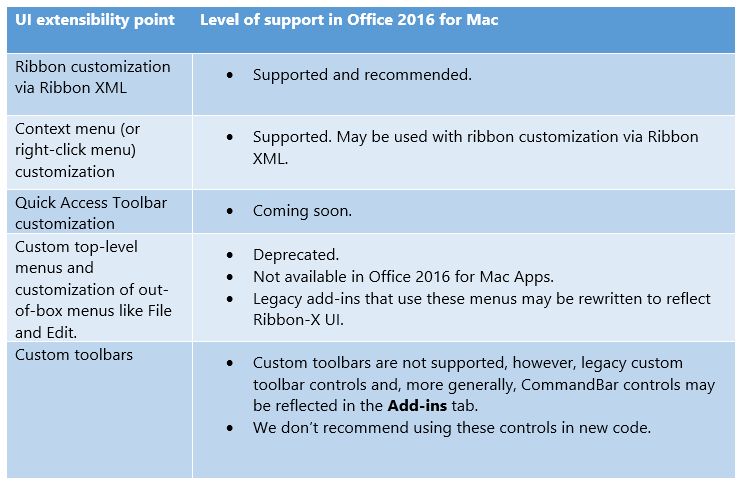 Overall, as we’ve mentioned before, we recommend that customers develop macros or VB add-ins in Office for Windows and use Office for Mac to debug, if needed. We’ll continue to ensure compatibility of existing macros and make improvements to the IDE.

Our developer help for VBA has also undergone some changes. The first thing to highlight is that we’ve moved our content to an “evergreen” model. That means that starting with Office 2013, our help topics are no longer specific to a single version of Office, but instead are combined topics that span all the versions of Office to which they apply. You can still view topics from Office 2010 by clicking Other Versions right below the topic title.

In addition to the evergreen model, we’ve published the VBA documentation on GitHub. By doing so, it allows a much faster process to improve our documentation and a way for you in the community to engage and contribute to the content. At the top of each VBA topic in MSDN, you’ll see a contributors notice like this: 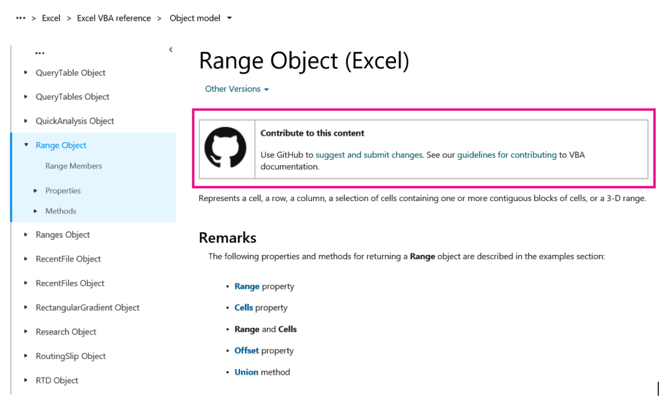 For more details on how to submit changes, bugs, or issues, or to contribute to the content itself through GitHub, see this article.

Subscription and notification schema changes in beta REST API
We wanted to update you all on some more breaking changes that we are making to the Outlook REST API beta endpoint. These changes impact Notifications and Webhooks. They are going to be deployed worldwide in phases over the next few weeks.

Microsoft Graph team
October 21, 2015
0 comment
Update 3 on Office 365 Unified API
Hi all, this is the third update for Office 365 unified API announcing a set of breaking changes that will roll in to the /beta endpoint effective today.