Generating Software Bills of Materials (SBOMs) with SPDX at Microsoft

The U.S. Presidential Executive Order on Improving the Nation’s Cybersecurity, released on May 12, 2021, came in response to the SolarWinds supply chain attack, and calls for sweeping improvements to modernize Federal Government cybersecurity and enhance software supply chain security. One of the items that they are requiring is a Software Bill of Materials (SBOM).

SBOMs aren’t new to Microsoft. In fact, we have been generating our own proprietary build manifests for years. Since September 2019, Microsoft has also led and co-chaired the Consortium for Information & Software Quality (CISQ) Tool-to-Tool (3T) SBOM cross-industry working group to define a new standard SBOM schema. What is new is that Microsoft has chosen, along with the others in 3T, to merge the 3T effort with the Linux Foundation’s work and use Software Package Data Exchange (SPDX) for all SBOMs we generate, and we have embarked on the mission to do this for all software we produce. This means we’ve had to convert our existing manifest generation tools to output JSON files in the ISO/IEC 5962:2021 standard SPDX 2.2.1 format, and we need to roll out this capability across our core engineering systems.

Why have an SBOM?

An SBOM is useful to producers and consumers of software, as it provides software transparency, software integrity, and software identity benefits. Here is a bit about each:

The report outlined what fields must be included in our SBOMs, so we mapped the NTIA minimum fields to SPDX 2.2.1:

This helped define the first phase of our implementation of the SPDX spec. We knew we had to include all mandatory fields from the SPDX 2.2 specification plus include specific optional fields to establish a baseline for our first implementation. While supplier name, package version, package checksum, and relationship fields are optional in SPDX, we are making them mandatory for Microsoft products.

Generating SBOMs at scale across Microsoft

Microsoft cares deeply about developer productivity and wants to minimize impact to build times, especially considering we have an average of ~500,000 builds occurring on any given day. Taking this into account, here’s how we’re planning to roll this out to the thousands of Microsoft products we build:

Capabilities of our SBOM generator

Our SPDX SBOM generator tool is cross-plat, supporting Windows, Linux, and Mac environments (and will be open sourced soon). It also provides open source software (OSS) detection for inclusion in the SBOM across NPM, NuGet, PyPI, CocoaPods, Maven, Golang, Rust Crates, RubyGems, containers (and their Linux packages), Gradle, Ivy, GitHub public repositories, and more. It generates two checksums for each package and file – SHA256 (strong, collision resistant hash) and SHA1 (required per SPDX specification). Our tool also automates digitally signing each SBOM to protect its integrity and then creates a new folder at the root of the build drop called _manifest; this is where the SPDX JSON file is stored. An example is shown below: SBOMs primarily provide transparency about the contents of the build output. At Microsoft, we wanted to go a step further and provide provenance information about the build system where the SBOM was generated and make the SBOM itself tamper-evident. To achieve this, we integrated a signing service with our SBOM generation tool, which performs the following workflow:

Validating our SBOMs at release

One key scenario that we’ve added is the ability to validate the hashes of all files listed in the SBOM against the hashes of the build drop itself and validate that the digital signature on the SBOM is the trusted signature from Microsoft. If our SBOM validation tool detects a hash mismatch or incorrect signature, our SBOM validation tool will block the deployment. This ensures that nothing was tampered with between build and release. Going forward, we would also like to add checks that, for example, the signature shows that the build came from the expected build definition. 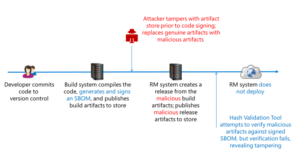 We anticipate more exciting announcements to follow on this topic in the future, so stay tuned!

CloudTest: A multi-tenant, scalable, performant and extensible verification service
In this post, Sina Jafari discusses key characteristics of the CloudTest infrastructure used at Microsoft and why similar characteristics should be considered in all large-scale test infrastructures to improve engineers’ productivity and help them ship high-quality software.

The DevOps Journey at Microsoft