While .NET Core has had Visual Basic since the first release, and WinForms since it was released in .NET Core 3.1, it did not include the Application Framework library and WinForms Designer support Visual Basic programmers expect. .NET 5 is the next version of .NET Core and we think .NET 5 is ready for you to migrate existing .NET Framework apps or create new WinForms applications.

We’re excited about the updates for Visual Basic in .NET 5, but first a reminder that you can base your decision to migrate to .NET 5 on whether or not you want its new features and how you need to interop with .NET 5 applications. The .NET Framework will be supported as part of Windows for a very long time. New features will not be added to .NET Framework. New features, including new WinForms features, will be added only to .NET 5 and future versions.

Visual Studio 16.8 and .NET 5 include the following updates for WinForms development in .NET 5:

You’ll find the new .NET 5 template in the Create New Project dialog. Naming has been updated for templates, and you’ll find the .NET Framework templates names include “Framework” and the templates that simply indicate .NET are for .NET 5. 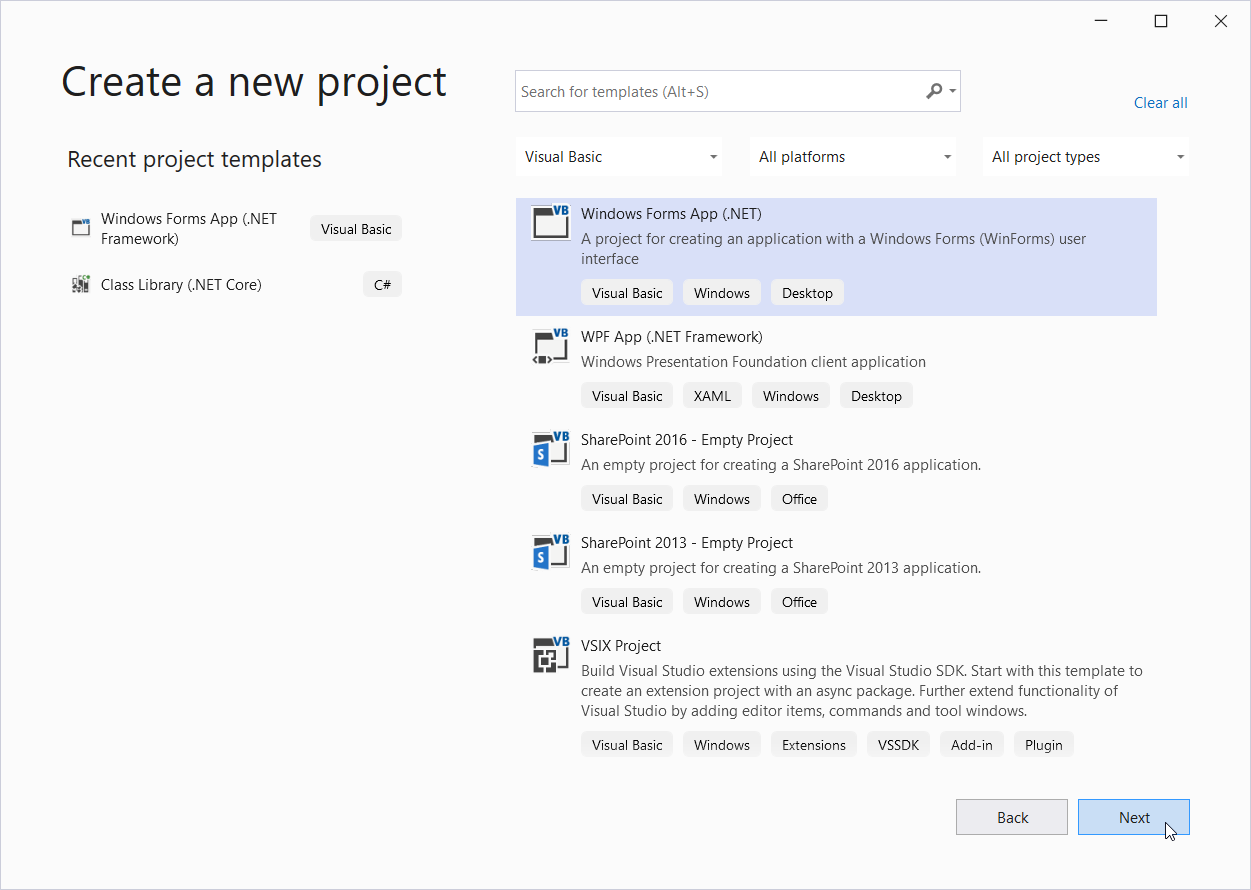 Many aspects of a WinForms Application Framework App’s behavior are controlled through settings in the Project Property Designer, which is shown by selecting Properties in the context menu of a VB Project in the Solution Explorer: 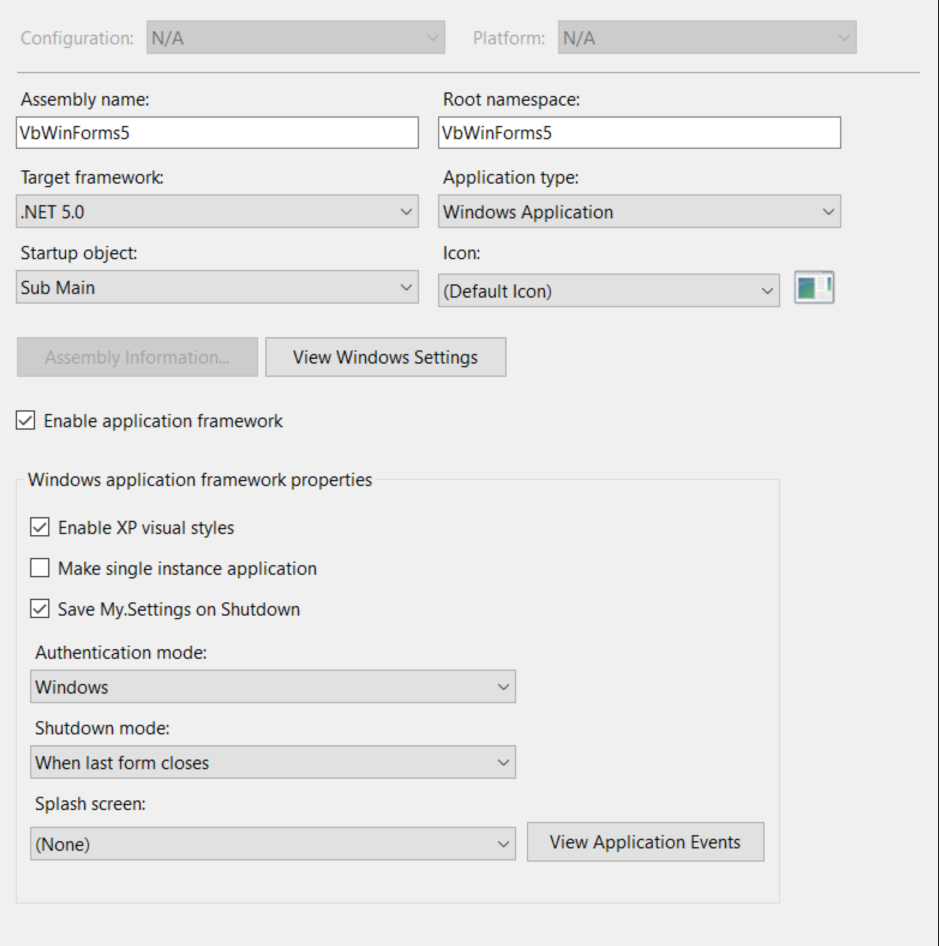 Enable XP visual styles: This option enables the OS-controlled themed rendering of controls, which was first introduced in Windows XP and retained the name going forward.

Save My Settings on Shutdown: Automatically saves settings properties when the WinForms application is closed. Note that the settings feature is not yet fully implemented in the new WinForms Designer for Visual Basic.

Authentication mode: This option controls whether the User property mirrors the Windows User through the My-namespace, or if you want to implement the user management yourself. Please note, that this does not cause any login dialog to be displayed or other authentication – it is exclusively for how the User property in the My namespace works.

Splash screen: Lets you pick a Splash screen form, which gets automatically displayed, when the WinForms app starts.

.NET 5 is in the .NET Core family and has differences in the APIs and libraries that are available, the Project System, and how applications are deployed. Check out this blog post for porting applications to .NET Core.

In general, your experience in Visual Studio will be similar for .NET 5 and .NET Framework. One difference is how you hook up Application Framework events for startup, network availability change detection, shutdown and unhandled exception notification. An empty ApplicationEvents.vb file to contain these events is created by the WinForms template in .NET 5, while in .NET Framework the file is not created until the developer clicks the View Application Events button. As a result, the procedure for wiring applications events in your application is:

Beginning with .NET 5, the Application Framework provides a new application event named ApplyHighDpiMode. The default is SystemAware which provides the same crisp high dpi rendering at design time and runtime.

If you want to start your WinForms App with a different high Dpi setting, you can do that easily by handling the ApplyHighDpiMode application event:

The high DPI mode set in the *ApplyHighDpiMode* event cannot be changed after the first Form has been displayed, and it should be set only once.

While we highly recommend Visual Studio and its WinForms Designer, you can also create applications outside Visual Studio, using the .NET CLI. You need the .NET 5 SDK, which is installed with Visual Studio, or you can download it here.

With the CLI, you create a new Visual Basic Forms app with the command dotnet new:

You control with the command line options how the project should get created:

–output outputDirectoryName : Determines the VB WinForms project name. A subfolder with this name is automatically created.

By default, dotnet new generates a .NET Core 5.0 WinForms Project without the Application Framework, similar to how a C# WinForms project works. The application starts with a Sub Main method in module called Program.vb which handles all the necessary set up:

If you want to create a .NET 5 WinForms VB Project with Application Framework support from the command line, then you should use these additional options:

–framework: Determines which .NET version the WinForms App is created. The Target Framework Monikers are

–use-app-framework: When this option is present (only possible from .NET 5.0 and above), a Visual Basic WinForms App based on the Application Framework is created. The resulting project files are the same as the files created by using the VB .NET 5.0 WinForms template of Visual Studio.

.NET Core and .NET 5 applications use a new project file (.vbproj) format. The new format is designed to be read and understood by humans as well as MSBuild. Files are no longer listed explicitly. Rather, all files in the folder where the .vbproj file is saved and any subfolders are implicitly part of the project. This is called globbing. You’ll see project level imports, project and package reference and Option settings in this file as well.

Visual Basic project files start with the <Project SDK> tag. For WinForms apps this tag needs to be…

Important: The Project Properties Designer does not currently support changing between .NET 5 and .NET Core 3.1. And if you inadvertently change it there, your project may not compile. Change the Target Framework manually in the .vbproj file to the one you need.

Change the TargetFramework tag to…

In Visual Studio 16.8, the WinForms Designer still has a few features missing. Also, the project system, which manages the Project Dialog, does not fully support the Application Framework.

Selecting the Startup Form in a .NET 5.0 Application Framework App

In the Project Property Designer, the selection of the Start Object is not currently functional. To work around this issue: 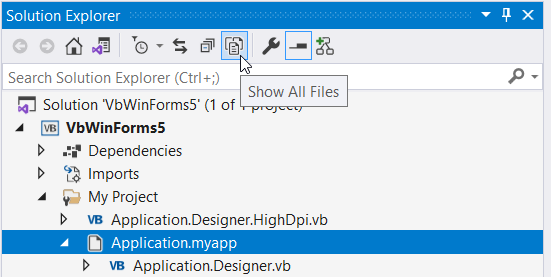 Have any comments, suggestions or have you found bugs? Please submit issues via Visual Studio Feedback or as issues in the WinForms GitHub repository. WinForms is open source and developed in the open. Visit https://github.com/dotnet/winforms, and get engaged! Happy coding!