Optimizing the .NET Framework Deployment Experience for Users and Developers

Rapid development has been one of the enduring themes behind the design of the .NET Framework. We know that authoring application installers is particularly difficult and could be improved. The following post is by Richard Lander from the program management team on the Common Language Runtime. He explains our motivations for introducing a new model for deploying the .NET Framework as seen in the Windows 8 Developer Preview and updated in the Windows 8 Consumer Preview.  – Brandon

Everyone knows that it’s all about the apps. I can think back to the early 1990s, when I was using both WordPerfect 5.1 and Microsoft Word 2.0c, both awesome desktop apps for the time, on Windows. Fast forward to the 2000s, and you’ll find many developers using the .NET Framework to build both desktop apps and websites and services. For many developers, the .NET Framework is the only Windows development platform that they know and love.

In this blog post, I’ll discuss how Windows 8 significantly improves the end-user experience of using .NET Framework apps, when the app depends on a .NET Framework version that isn’t a built-in component of a particular version of Windows. We will look at the integrated experience that Windows 8 provides to run apps built for the .NET Framework 3.5 and earlier versions.

On Windows 7 (and earlier Windows versions), we provide an easier experience for Windows users who attempt to run .NET Framework apps but do not have the correct version of the .NET Framework installed. This experience is oriented around a simple error dialog, which takes users directly to the download page for the required .NET Framework version.

All in all, this is a reasonable experience, but when you think about it in broader terms, the dialog and web-page are simply guiding the users through a manual, if well-orchestrated, .NET Framework installation process. In the planning of Windows 8, we decided that this experience wasn’t good enough for our customers.

Looking at the Numbers

The dialog above simply directs end-users to a set of web-pages, so we have access to data that gives us a partial view into which versions of the .NET Framework are actively in use, and which versions end-users most often need to (sadly) deploy themselves. The following chart provides a high-level view of the data coming in through our existing dialog.

This chart is open to wild interpretation unless you have the right context. You may have noticed two major trends with the .NET Framework and Windows over the last decade:

Re-interpreting the chart with this information in mind, one would guess that:

The chart below demonstrates the theory that nearly all the missing .NET Framework 2.0 installations are specific to Windows XP. 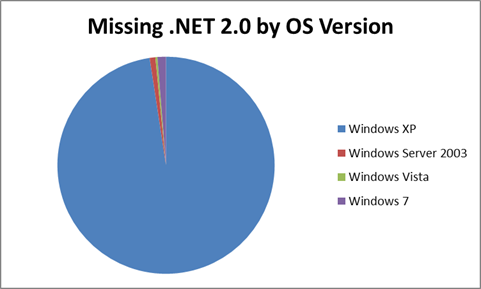 Unlike Windows 7, Windows 8 automatically downloads and installs the .NET Framework 3.5 from Windows Update. There are no links to follow, no risk of missteps by customers who are not sure which .NET Framework versions to download and install from MSDN. The whole experience requires just a few simple clicks, and then you are done.

The new experience centers around a new dialog box, which users will typically see when they attempt to install a .NET Framework 3.5 (or earlier version) app, or run the app, if it doesn’t have an installer. We released this new experience with the Windows Developer Preview at the Microsoft BUILD conference, and have updated it for the Windows 8 Consumer Preview. See the latest user experience in the image below. 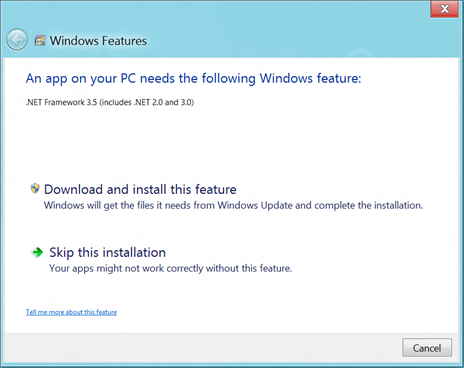 We’ve seen significant uptake of this new experience. With the Windows Developer Preview, we saw users opt to download the .NET Framework 3.5 on ~25% of machines via the new experience.

Additionally, the .NET Framework 3.5 can be installed via the existing control panel experience. 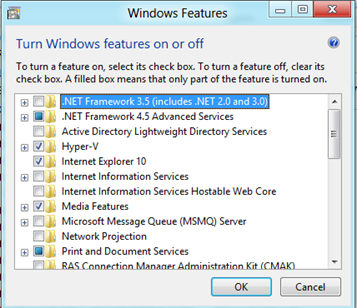 For more information about these user experiences, see Installing the .NET Framework 3.5 on Windows 8 Consumer Preview in the MSDN Library.

Do you like this experience? Do you see it as an improvement? Is there anything about it that you would change?

Improving Launch Performance for Your Desktop Applications
Application performance is something we hear about all the time. It almost always falls into one of the top three issues when we aggregate all of the feedback channels ...

Brandon Bray March 20, 2012
0 comment
Async in 4.5: Worth the Await
Developers often ask for guidance on how to write responsive user interfaces. Reading most books about the .NET Framework over the past ten years, you’ll see coverage ...