The August 2017 Preview of Quality Rollup is now available.

This release contains the following quality and reliability improvements.

Note: Additional information on these improvements is not available. The VSTS bug number provided with each improvement is a unique ID that you can give Microsoft Customer Support, include in StackOverflow comments or use in web searches.

When you apply this update on non-English locale systems, you may notice some pseudo localized characters instead of localized content in the interactive setup. This is a non-impacting, UI-only, setup issue that does not affect the deployment result or functionality of the update contents. Please apply this update to help secure your computer against vulnerabilities and the issues that are addressed by this update. For more information, see: KB 4043564.

File Version is not Updated

The File Version of the following files did not change in this update.

It is typical for both File Version and Date Modified fields to be unique in each update. The unique values helps for identification of patches.

You can see these fields in the file properties for System.Management.dll, for example, in the following image. 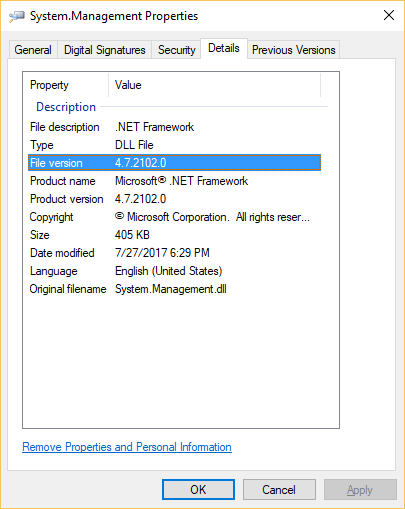 The last few .NET Framework Monthly updates are listed below for your convenience: