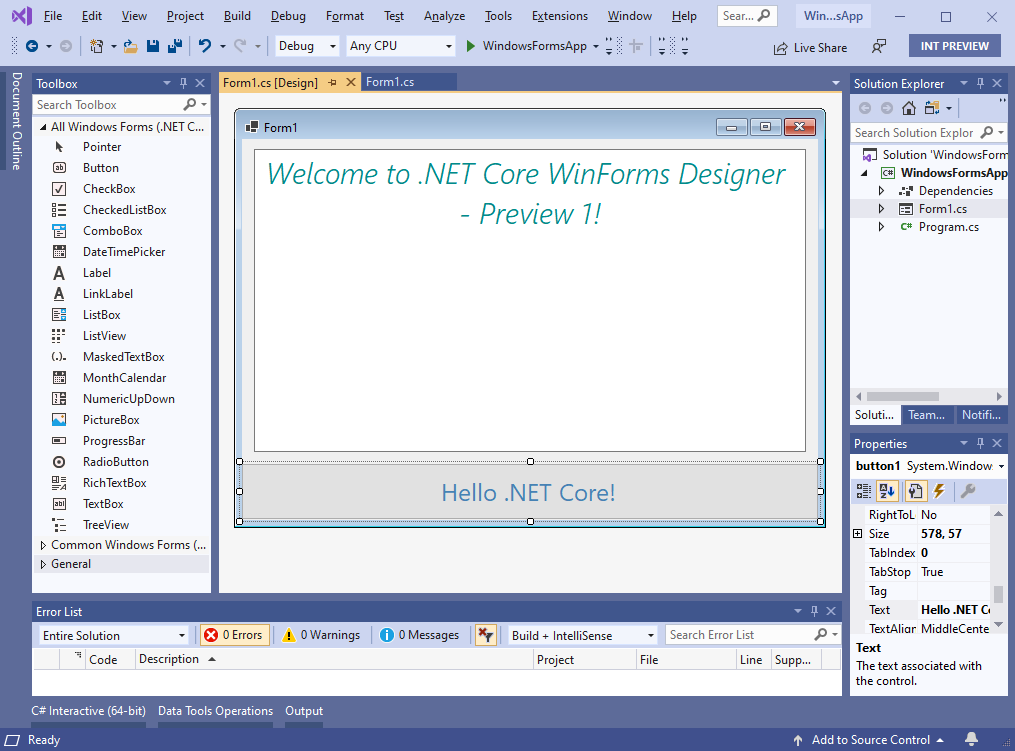 For developers the .NET Core Windows Forms Designer (when we will release the GA version) will look and feel the same as the .NET Framework Windows Forms Designer. But for us it is a huge technical challenge to bring the designer to .NET Core because it requires the design surface that hosts the live .NET Core form to run outside the Visual Studio process. That means we need to re-architect the way the designer surface “communicates” with Visual Studio. You can watch these communications in the Output Window, where we track each request sent when the Visual Studio components are accessing properties or executing methods on the live controls in the design surface. The engineering team is still working on this technical challenge, and we will be releasing the Preview versions on regular basis to give you the early glance at the .NET Core Designer. Stay tuned! The next Preview will be coming out in early November.

Because this is the very first preview of the designer, it isn’t yet bundled with Visual Studio and instead is available as a Visual Studio extension (“VSIX”) (download). That means that if you open a Windows Forms project targeting .NET Core in Visual Studio, it won’t have the designer support by default – you need to install the .NET Core Designer first!

It is early days for the designer, here is what to expect…

Please keep in mind, that this is the first preview, so the experience is limited. We support the most commonly used controls and base operations and will be adding more in each new Preview version. Eventually, we will bring the .NET Core Designer at parity with the Windows Forms Designer for .NET Framework.

Because many controls aren’t yet supported in Preview 1 of the designer, we don’t recommend porting your Windows Forms applications to .NET Core just yet if you need to use the designer on a regular basis. This Preview 1 is good for “Hello World” scenarios of creating new projects with common controls.

What is not supported in Preview 1:

We are putting out our first bits so early to support the culture of developing the product with our users’ early feedback in mind. Please do reach out with your suggestions, issues and feature requests via Visual Studio Feedback channel. To do so, click on Send Feedback icon in Visual Studio top right corner as it is shown on the picture below. 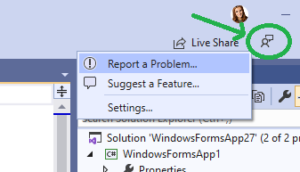 We appreciate your engagement!

What to do if Windows Forms Designer doesn’t work?

We heard some question related to the Windows Forms Designer not working. Here’s what could have happened:

We also received some questions related to the .NET Core WPF Designer not working and if it requires a separate installation or the Windows Forms Designer installation. No, the WPF Designer is completely independent of the Windows Forms Designer. We released its GA version of the WPF .NET Core Designer at the same time as .NET Core 3.0 and it comes with Visual Studio. In Visual Studio version 16.3.0 we had an issue with the Enable XAML Designer property set to false by default. That means that when you click on .xaml files, the designer doesn’t open automatically. Upgrade to the latest Visual Studio version 16.3.1 where this issue is fixed. Another option to fix it is to go to Tools -> Options -> XAML Designer and check Enable XAML Designer. 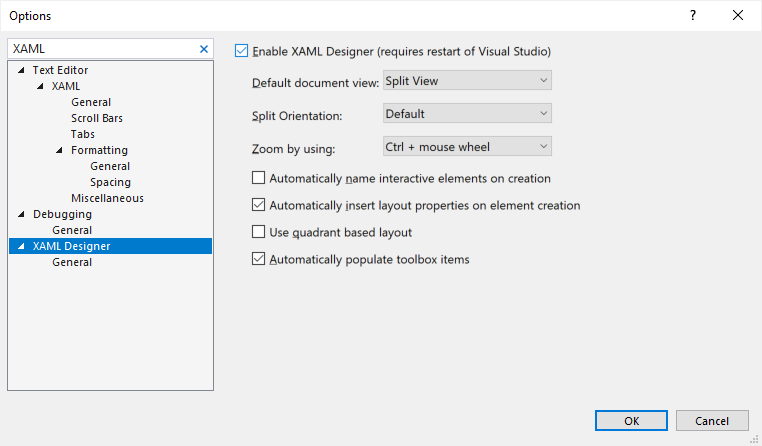